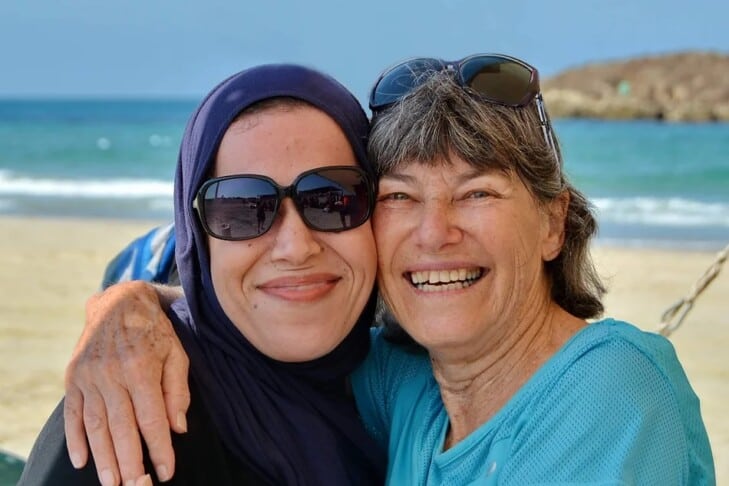 Recently I listened to two podcasts, each of which portrayed troubling aspects of Israeli society: one asserted that generally speaking Israeli Jews live in trepidation of their Arab neighbors, while the other described the rise of Jewish settler violence in the Palestinian territories. Moreover, the news from Israel is replete with growing unrest in the West Bank—all of which throws into further doubt any hopes for progress toward the illusive two-state solution. Naturally, I could only conclude that the future of Israel is bleak.

So it was very heartening on that same day to learn of an inspiring Israeli NGO that is succeeding in building trust among Palestinians and Jewish Israelis in spite of the challenges.

Allow me to backtrack: As one of the COVID-19 silver linings, a group of volunteers and staff involved with CJP’s Israel and Global Jewry Boston-Haifa Connection created a virtual beit cafe (coffee house) that meets twice a month on Zoom. About 20-25 Haifaim and Bostonians hear presentations by speakers from Boston and Israel who share their passion projects in a variety of spheres. One of the volunteers from Haifa, Reform Rabbi Amnon Ribak, had arranged for a speaker named Naama Gorlay to talk about a program in which Amnon volunteers called Road to Recovery. Naama is the NGO’s executive director.

Road to Recovery is an organization with a seemingly simple mission: driving Palestinian patients from the West Bank and Gaza who need life-saving medical treatments to hospitals throughout Israel. The cadre of roughly 1200 volunteers meet the sick children and adults at military checkpoints and transport them to and from their hospital visits. While the treatments are paid for by the Palestinian Authority, the essential hospital services themselves are available only in Israel, due to the limitations of medical care in the Palestinian territories. The cost of taxis to the Palestinian families who must make frequent hospital visits would be prohibitive.

So how did this project begin? Over a decade ago, an Israeli Jew named Yuval Roth participated in another powerful Israeli-Palestinian peace building NGO called the “Parents Circle Families Forum.” This is an ongoing program that brings together Palestinian and Israeli family members who have lost loved ones in terrorist attacks by Palestinians or as the result of Israeli military operations. Yuval’s brother had been killed in a terrorist attack in 1993. One of the Palestinians asked Yuval to if he could drive his sick brother from a West Bank border checkpoint to Haifa’s Rambam Hospital. After Yuval agreed to do so, similar requests started flooding in.

Yuval proceeded to build an organization comprised exclusively of volunteers to fill the tremendous need of driving Palestinian patients—usually a child accompanied by a parent—back and forth from crossing points for hospital care. Most of the lifesaving treatments are for various forms of cancer.

As you can imagine, the logistics are complex and require a lot of coordination, as well as flexibility. The logistics themselves are coordinated by other volunteers on a tight budget. There’s no paid staff other than the executive director. Approximately 10,000 rides are provided annually. Donations from generous supporters, including the late singer-songwriter Leonard Cohen, provide additional funds to cover gas expenses for volunteers as well as other complementary activities for children and their families. The more funds that are received to pay for gas, the more rides can be offered. Road to Recovery receives a modest grant from The Good People’s Fund, which provides resources and technical assistance to small NGOs who demonstrate an outsized impact in performing tikkun olam.

Our beit cafe presenter, Naama Gorlay, is a beautiful soul who herself had been a volunteer driver for nine years. Frustrated with the lack of progress in achieving a resolution of the Israeli-Palestinian conflict, she nonetheless felt she needed to “do something” to make a difference albeit a small one. But is it really so small? These acts of compassion are actually huge.

One by one, those Palestinians who receive assistance and the Israelis who provide help meet each other and experience firsthand their common humanity. Sadly, the vast majority of Palestinians only encounter Israelis as settlers, as IDF soldiers at checkpoints or in combat, or as prison guards. Most Jewish Israelis have no contact at all with Palestinians and are often fearful of them as potential terrorists.

Hearing Naama and Amnon speak of the feelings that are shared between the volunteers and patients was uplifting and inspiring. Despite language challenges, the communications are poignant, even when few actual words are spoken. Amnon described one transport experience he had where the mom was about to donate her kidney to save her child as “something you can put your heart into.” There are times in life when few words need to be spoken to form a profound human connection.

According to Naama, the rides are often “magical,” and she felt “honored” when on many of her rides, Arab family members have been comfortable enough to fall asleep in her car, as it showed the level of trust that had been established. Here again, no words were needed.

Besides the driving, the NGO organizes a semi-annual Yom Kef (Fun Day) for children and families. Bringing Palestinians who have never before seen the ocean to the Mediterranean coast line for a day of relaxation and enjoyment with their Jewish Israeli friends creates a peaceful experience of coexistence that melts stereotypes and lasts a lifetime.

Sitting here in Boston, it struck me that although I can’t be a Road to Recovery driver, the one thing I could do was amplify the work of this organization within the broader community, and in so doing, spread the hope.

Subsequent to the Zoom presentation, I was introduced to a friend of a friend named Allen Katzoff who’s been involved with the organization as a supporter.

As Allen put it: “When I first learned about Road to Recovery it blew me away. 1,200 Jewish volunteers driving millions of kilometers to bring thousands of sick Palestinians to Israeli hospitals for life-saving treatments. It is the epitome of the mitzvah pikuach nefesh (saving a life), while building bridges so that former enemies can see the humanity in the other. This also is the road to peace.”

If you’re interested in supporting an organization doing avodat kodesh (holy work), I encourage you to check out Road to Recovery.

Naama conceded that her modest NGO alone cannot bring peace to the region or solve the Israeli-Palestinian conflict, but it’s helping people physically and emotionally one family at a time, by saving lives, creating deeper understanding among neighbors,  and feeding the souls of thousands.  And it’s creating a fundamental change in attitudes on a grass roots level, which builds the foundation for a peaceful future.

The Road to Recovery website states that “these one-on-one encounters make for small, quiet peace treaties.”

And that’s no small thing.

Hear directly from Road to Recovery via Zoom on Sunday, Nov. 13, at 10 a.m. To reserve a “seat,” register in advance.