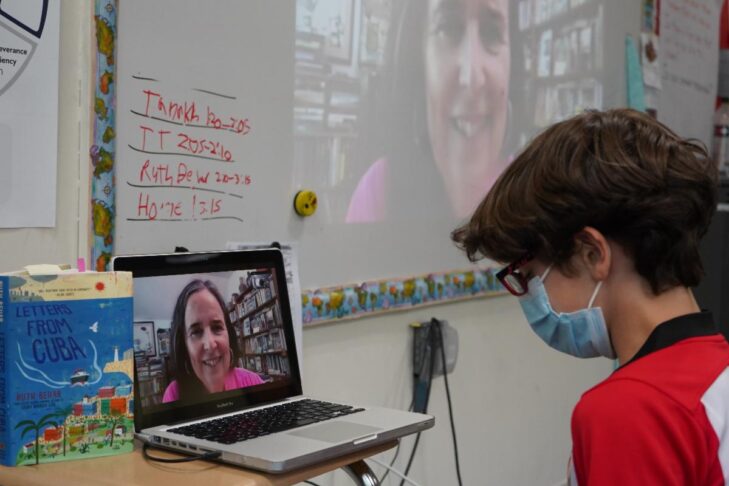 Literacy in the fifth grade classroom has been quite an exciting place as of late! Tamarim (fifth graders) read the book “Letters From Cuba,” which is the story of a young Jewish girl, Esther, who flees Poland in 1938 and settles in Cuba. Characters in the book come from different countries, religious backgrounds, races, ethnicities, and social classes. Tamarim learned about Cuban historical information, African religious traditions, and historical events. Additionally, they discovered how Esther learns that she is more than one simple identity when she realizes that she can adapt to her new life in Cuba by incorporating many different elements that she learns from the people around her.

This week, the author of “Letters From Cuba,” Ruth Behar, virtually visited the Tamar classroom. Two years ago, she visited JCDS in person to discuss her book “Lucky Broken Girl” and she was so excited to return to spend time with Tamarim. Ruth’s visit was a sweet surprise for Tamarim. They could hardly believe that an author was coming to visit us to talk about a book they thoroughly enjoyed reading.

As they read the book, Tamarim engaged in havruta discussions, often thinking of questions that were stimulating and served as discussion starters. We referred to the essential questions for the unit, which helped guide their learning. These included: How do immigrants learn to navigate their new countries and define what home means? What contributions or influences affect one’s identity over time?

Who is wise? He who learns from every man, as it is said: “From all who taught me have I gained understanding” (Psalms 119:99).

As we move through the world, the places we visit and the people we meet can teach us lessons that shape our identity in valuable ways. As Esther demonstrated, being open to learning from everyone we encounter can help us gain understanding of how others live and the choices we wish to make in our own lives.The book is written in letter format, with Esther writing letters from Cuba to her little sister, Malka, who was still in Poland with the rest of the family. Throughout the unit, Tamarim wrote their own letters to special people in their lives, as well as Ruth. These letters served as inspiration for Ruth’s talk during her visit.

The visit began by having each student introduce themselves and tell Ruth about their favorite scene in the book. Students then asked some questions they had prepared, followed by Ruth sharing a slideshow with pictures of her family members and several photos from her trips to Cuba. Many of the photos she showed were scenes that were vividly described in the book. It was such fun to hear the students excitedly exclaim, “Hey! I remember reading about that in the book!”

Tamarim had many questions that focused on characterization, the history of Jews in Cuba, the antisemitism that Esther experienced, and how the community came together to support Esther and her family. Additionally, they asked about the feelings and emotions portrayed through the characters, the process of writing the book, going to Cuba to do research for the book, and asking about Ruth’s family history and how it inspired her to tell Esther’s story. Lastly, Tamarim shared several ideas that Ruth could think about if she were to write a sequel! She truly was an inspiration for many of our budding Tamar authors.

The hour-long visit passed by very quickly, and soon it was time for the students to say goodbye and share appreciations with Ruth. Ruth shared her appreciation for Tamarim and noted in an email after her visit, “I am so moved by all that they have learned from ‘Letters From Cuba’ and their brilliant ideas about the characters, the scenes, and the sequels.” Ruth plans to send each student a signed bookplate, which will be a wonderful memento of their time together.

Michelle Janoschek is a fifth grade humanities and math teacher and Tamar co-advisor.