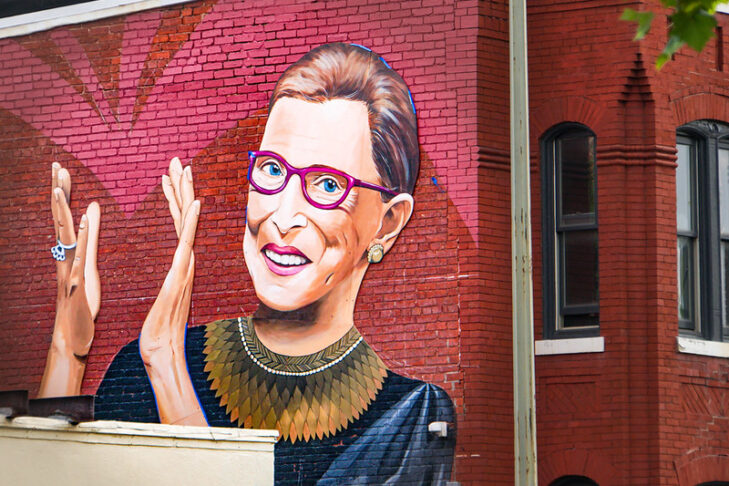 Three JCDS teachers share how they remembered and honored Ruth Bader Ginsburg with their classes.

“In second grade, we read the book “I Dissent: Ruth Bader Ginsburg Makes Her Mark“ by Debbie Levy and highlighted the parts of RBG’s life that exemplify the JCDS Habits of Heart and Mind. The stories of her experiencing prejudice as a Jew and a woman helped us continue to talk about the importance of multiple perspectives and empathy; her use of evidence and problem-solving throughout her legal career to make an incredible impact on the lives of so many are just some of these examples.

“This was also a great chance to highlight some important vocabulary words that come up in talking about the book and in talking about Justice Ginsburg’s life: words like justice, prejudice, protest and, of course, dissent. As a staff, several gathered after dismissal on Monday to process the grief over RBG’s death, then mourn her as a human being, a justice, a woman and a Jew. We shared reactions, reflections and some of RBG’s own famous quotes and wisdom. We ended by saying El Molei Rachamin, the traditional prayer recited at Jewish funerals and houses of mourning. It was important to take this time to “sit shiva” in whatever way we could to honor and respect her memory and this moment in time in history.”
—Naomi Greenfield, second grade teacher

“Fourth grade students began a unit on identity, beginning by defining the word identity as “the qualities, characteristics or beliefs that make a person who they are.” Students brainstormed different aspects of a person’s identity, including race, age, relationships, gender and values.

“As a class, we watched a video of the book “I Dissent: Ruth Bader Ginsburg Makes Her Mark.” Students created a telling brain frame to keep track of different identities that RBG had (Jewish, mother, lawyer, woman, persistent, advocate for equality) and discussed some of the strong beliefs that she had around gender equality and fairness. Students then chose to either explain one of the beliefs that RBG held and give an example of a time when she stood up for this belief, or to choose a belief they hold and explain how they could stand up for that belief. Collectively, students shared their sadness of the passing of RBG as well as their gratitude for the work she did to advocate for equal rights.”
—Danielle Smith, fourth grade teacher

“Much like during the Passover seder, students arrived on Monday with countless questions about Justice Ginsburg. Some wanted to know more about who she was in general, what she fought for and why so many people in their lives were suddenly buzzing about this woman with which they were only sort of familiar. Others, more well versed in who Justice Ginsburg was, were curious about the precedents she set on the high court, the legal decisions she helped make, the issues and individuals she championed and what her vacant court seat meant for our country now and in the future.

“So, we did what we do best at JCDS: we learned together, setting out to research the answers to our most pressing questions and coming back together to share the answers. And what we learned more than anything was something she tried to teach us her entire life: that one person with enough passion and commitment can solve any problem, move humanity in the right direction and collaborate with anyone to make the world a better place. But perhaps more importantly, we learned that there is nothing stopping any of us, young or old, from taking up the causes in which she believed and to fly the banners she flew. Her legacy will be kept alive as long as she lives in our hearts and we remain committed to doing “the best [we] can with whatever…talent we have.”
—Josh Mocle, sixth grade humanities and seventh and eighth grade social sciences teacher