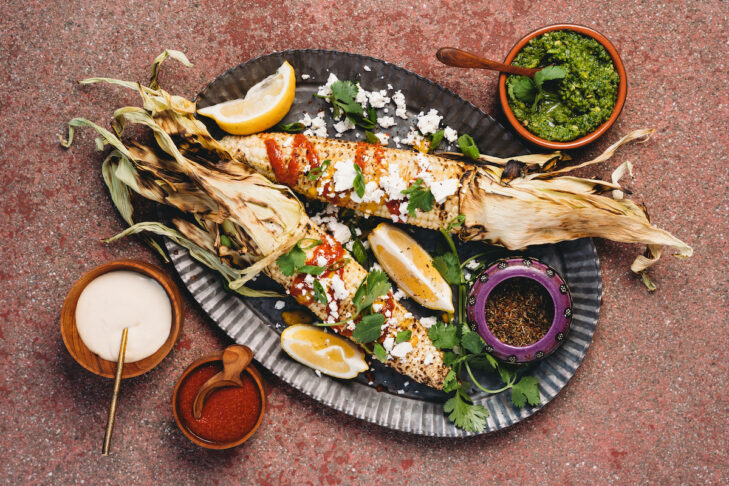 Have some extra time this Friday? Why not try a unique main course of brisket with pomegranate molasses for Shabbat! (Get the recipe here.) This is just one of the recipes from food columnist and author Faith Kramer’s new book, “52 Shabbats: Friday Night Dinners Inspired by a Global Jewish Kitchen.”

“I kept collecting ideas and recipes,” Kramer said. “I was fascinated by the backstories the recipes tell, including about community and foodstuffs.”

The author has listened to a lot of backstories while going to Shabbat dinners around the world and creating her own recipes as the food columnist for j., the Jewish News of Northern California. Now she’s sharing her knowledge with readers.

“There are many layers of flavor in the cookbook,” Kramer said.

As she explained, “I do have the classics,” such as “Friday Night Challah” and “Real Deal Chopped Chicken Liver.” She noted, “You’ll also find matzo ball soup with Mexican flavors such as hominy—a matzo ball and pozole soup. It’s not an uncommon way for Jews of Latin America and Mexico to spice up their chicken soups.”

For a Tu BiShvat-themed Shabbat dinner, which we celebrated earlier this week, there are multiple suggestions, from the pomegranate molasses brisket to a pair of tzimmes recipes.

“In the spicy beef tzimmes, you can have your chuck roast or brisket,” Kramer said. “It has some dried fruits, some potatoes. What really makes it different is the chipotle peppers. It’s what gives it a smoky punch.” 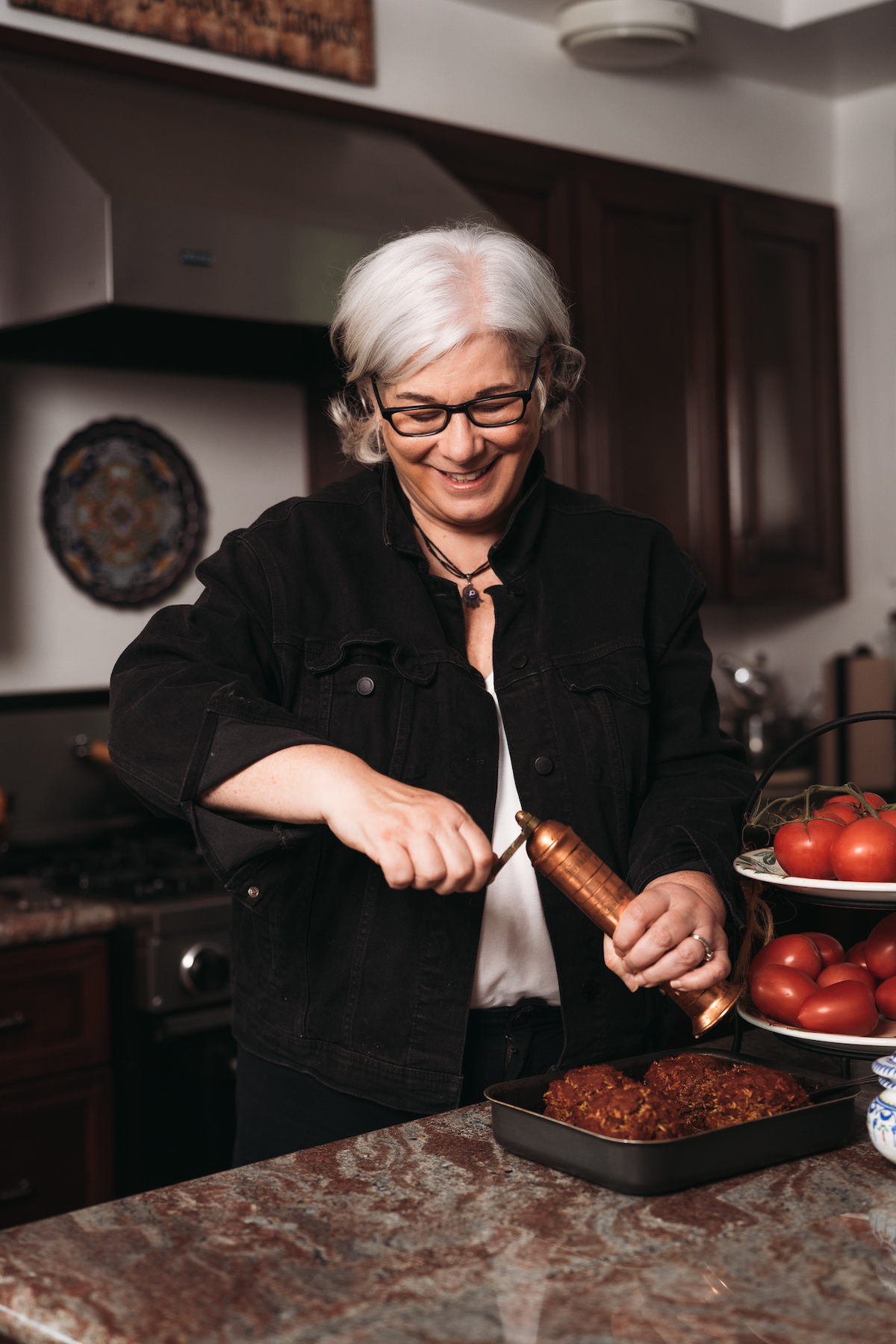 A vegetarian alternative is the carrot curry tzimmes, which is “very popular with people who buy the book and are sharing photos,” she said.

This recipe incorporates a carrot curry from the Bene Israel, one of the historic Jewish communities of India.

“A good portion of the recipes are vegetarian,” Kramer said. “You can build a whole Shabbat menu around them.”

That’s what her cookbook does. Each main dish comes with complementary suggestions to “Make It Shabbat.” For the carrot curry tzimmes, she recommends basmati rice as an accompaniment and mango and cardamom mini cheesecakes for dessert. Chapters are themed around the seasons of the year, with both tzimmes recipes appearing in the winter section, perhaps a good idea after last week’s single-digit temperatures.

She also said that readers are welcome to make some changes when it comes to planning Shabbat dinner around one of the recipes.

“You don’t have to make the whole roast chicken [with] herbs, you can substitute a rotisserie chicken,” Kramer said. “Shabbat is going to happen anyway. It’s about intentionality, the act of getting together around the dinner table.” 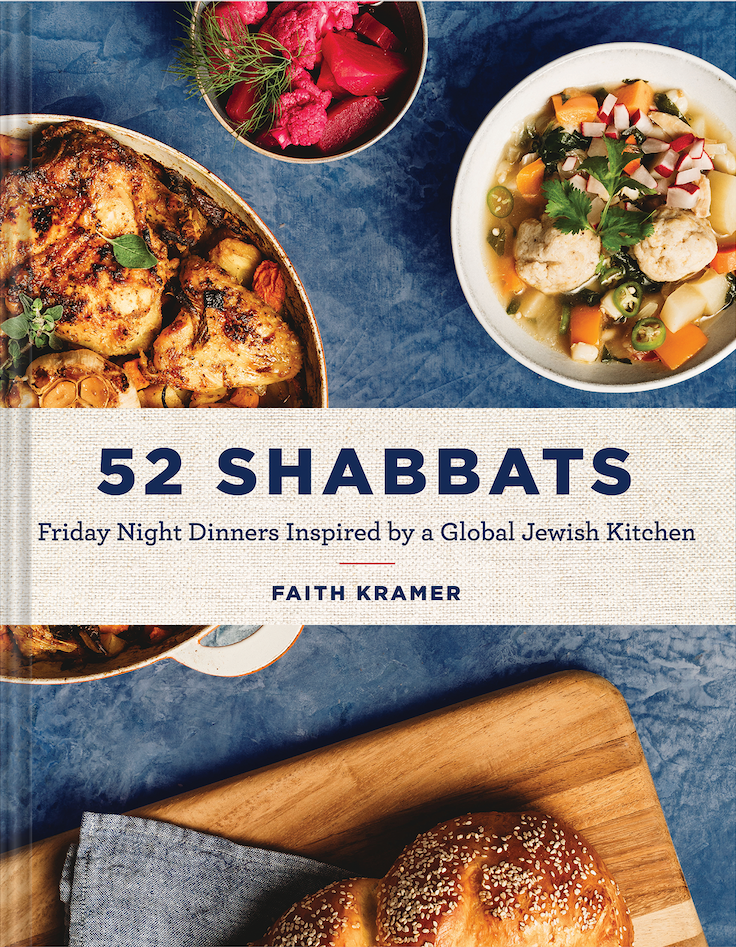 Over the years, she has experienced many such experiences.

“I’ve gone to Shabbat dinners all around the world,” she said.

It’s an itinerary that includes London—where she went to a shul on Abbey Road—and the Cambodian capital of Phnom Penh. In Phnom Penh, she had Friday-night dinner at a local Chabad house, where an Israeli peppercorn grower brought some of his green peppercorns, which are part of Cambodian cuisine, and incorporated them into the dinner. She’s also been to Shabbat dinners in two Australian cities, Sydney and Melbourne, as well as to Kobe, Japan.

Raised in New York, the author’s earliest Shabbat memory is of her grandmother covering her eyes while saying the prayer over the candles.

Kramer called this moment “one of warmth and light, kind of a separation between Shabbat and not-Shabbat. I think it’s so important.” And, she added, “If your family doesn’t light candles, even just looking at everyone and saying ‘Shabbat Shalom’ and acknowledging we have shifted in time.”

She also noted, “The recipes are not just for Shabbat. You can use them anytime.” If readers want to make them for Shabbat, “you can make them in advance. For some of the recipes, I try to give as much detail on how to prepare as I can—step-by-step directions for basic building blocks of Jewish food. I try to give the authentic taste of something, the full taste. I’m dedicated to big flavors and vibrant tastes.”

Consider another winter-themed suggestion—”Sweet-and-Tart Silan-Roasted Carrots with Lentils.” The recipe overall “is bursting with color and flavor, honoring the joy of Shabbat,” she writes, noting that silan, a date syrup popular across the Middle East and North Africa, has “a complex, sweet and slightly tart flavor.” The book notes silan’s history: “When honey is mentioned in the Torah, they are talking about silan.”

“To me, every recipe tells a story,” Kramer said. “I make sure everyone knows that.”

Want to try a recipe from the book? Learn how to make brisket with pomegranate molasses!