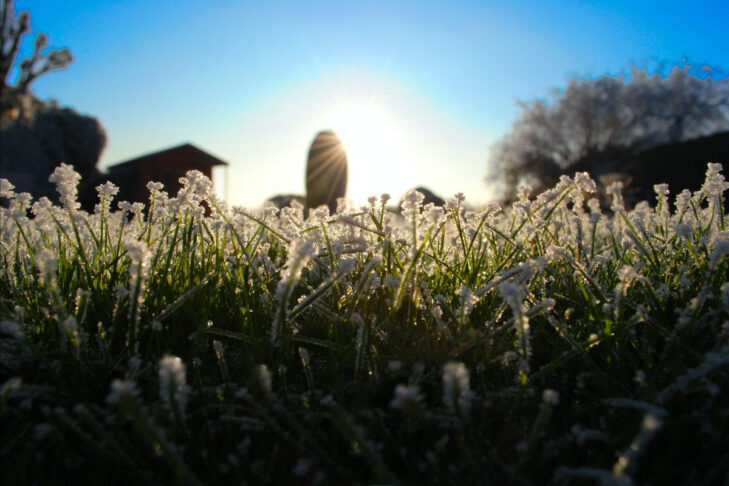 Just about four years ago in New Orleans, I was awakened daily by the crowing of a rooster. I don’t know why, but I fell in love. Before day break I anticipated its melodious alarm clock. Simultaneously, “Dawn” introduced herself to me. She varied her morning wardrobe to accompany the rooster’s call—sometimes an exquisite color palate reflecting her mood of positivity, other times grays for her muted mornings. I was obsessed and filled with awe by the beginnings of God’s day.

Cantor Kevin Margolius of New Orleans’ Truro Synagogue’s Shabbat Pesach message this year recaptured these feelings in me. He was unusually exuberant on the subject of dew. He explained the special prayer for dew, Tefillat Tal, was recited on the first morning of Passover. In contrast to the Amidah blessing recited from the last day of Sukkot until the start of Passover, which specifically petitions for rain (Geshem), he would soon be chanting his most favorite of favorite sounds of a prayer. It would commence the reciting of the daily Amidah prayer and offer gratitude for God’s gracious, life-giving gift of gentle and predictable dew. Something about the way he explained it, shared it, sang it, created in me a boundless sense of joy—a different understanding—a curiosity and a profound new inspiration.

I now ashamedly realize I had only thought of dew as a nuisance that got my pants wet as I attempted to sit down outside to take the first sip of my beloved coffee. Or remembering my annoyance as a little girl being made to go get a towel for a parent just as I got comfortable in the porch rocker.

Perhaps oddly, I am delighted to experience the steady, subsequent evolution of this newly adjusted lens. It is times like these that always make me wonder what else I have been misperceiving or miscalculating. Within the weeks of that Shabbat service, I clearly felt the need to further explore the subject of dew:

I started with the science of what dew actually is. It comes from water vapor in air that has been cooled. As the air gets cooler (usually in the evening), the water vapor condenses to liquid water (dew). If an object is even cooler, the dew will rest atop it until the air and object begin to warm up (usually the following morning) and the cycle will reverse with the water evaporating back into air. Dew typically lasts at least two hours beyond dawn, sometimes even longer. Frost is frozen dew drops!

In agricultural systems of biblical times, utmost concern was focused on the rainy and draught periods of the year. As the blessings reflect, there was seasonal, daily petitioning to God to provide an abundance of rains. Good deeds and ill-mannered behavior were seen as correlating to amounts of rainfall. Dew, on the other hand, was believed to be given unconditionally. Once the rainy season was to end, the community looked to God and the heavens to at least grant a steady dispersal of water in the form of dew. It was counted on to maintain the food supply until the rainy season began. There was the hope and belief that the dew would sustain the food system. (It certainly helped with certain plants and conditions.) Oddly enough, it is only in the past decades that we have begun to think of ways to harness dew to help maintain sustainable water supplies in arid environments in the U.S. and around the world.

An abundance of at least 28 references to dew exist in the Bible. Throughout the Psalms, dew represents blessing; a gift from God. It is seen as a sustenance which arises as if by magic. Overnight, something mysterious occurs, and when we awake, water gilds the grasses and the fields. Dew represents divine grace, omnipresent, mysterious blessing for everyone equally no matter who we are. The imagery of Tefillat Tal is sweet. We ask God to let dew drop sweetly on the blessed land, to let dew sweeten the honey of the hills.

Yes! Roosters, dawn, dew, the soil, the people I love—I continue to be awed by each of these God-given wonders. With this newly adjusted lens, I treasure the mornings I am able to go out first thing into the garden, amidst the dew drops, and embrace the day.