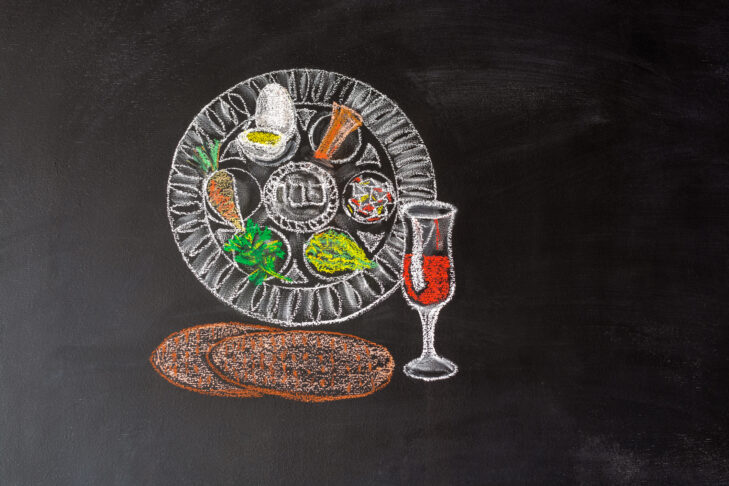 I have been attending Passover sedarim (seders) for as long as I can remember—with family, with rabbis, with friends, and at the synagogue. It is always fun to experience the customs and traditions of another family and to deepen my own connection to the festival through them.

There was that time the children dressed up as Israelites in the wilderness, the use of scallions to hit each other during Dayeinu (a tradition we’ve adopted), and many different songs, tunes, and melodies.

This year, I had the privilege of sharing the seder in a completely new way and one that has enriched and uplifted me like no other.

Earlier this year, my synagogue, Temple Shir Tikva, began offering a Bible study program together with the Greater Framingham Community Church, the largest African American church in our area. Together with their reverend, Dr. J. Anthony Lloyd, we offered sessions studying chapters from the Book of Exodus through our respective religious traditions.

It was fascinating to see the way in which we could read the same biblical verse in different yet similar ways, and how so many times we were able to pursue parallel approaches. Through the shared study, together with our congregants, we deepened our appreciation of the text, but more than this we got to know one another as chevrutah—friends and study partners.

The one complaint that the Rev. Lloyd and I kept hearing was that we never gave them enough time in their breakout rooms to be together without us.

In the course of studying the Book of Exodus, we unsurprisingly kept returning to the subject of Passover and the significance of the emergence from slavery to freedom in our respective traditions. This led to talk about the possibility of sharing in a seder together. In the midst of COVID-19 we could not physically open our homes and community buildings to one another, but we could open our screens and join together for a Zoom seder.

Together, the Rev. Lloyd and I began preparing for our seder: “From Slavery to Freedom Together.” What became abundantly clear in our conversations were the amazing number of areas where we not only shared a text, but also shared a historical response and a present-day call to action.

We brought Jewish and Christian ideas to the table and accompanied them with more modern texts and songs responding to the Exodus story, with a message that was relevant for today and this moment. We emerged with a Haggadah that blended our traditions in word and music.

In the course of our seder, we shared words from the Declaration of Independence and from Dr. Martin Luther King Jr.; the messages of the texts resonated to such an extent that one could imagine they had originally been written intentionally for inclusion in the celebration of Passover.

We added New Testament texts, so that alongside Urchatz (the initial washing of the hands), we read a passage from John 13, a text that begins: “It was just before the Passover Festival” and includes Jesus’s washing the feet of his disciples as an example that they should wash the feet of one another.

And throughout, our seder was uplifted by spirituals, songs from the African American religious tradition, singing of Moses, of the quest for freedom, and of the need to persevere in the struggle for justice and the Promised Land.

All of these elements were added to the traditional elements that we would expect around any and every seder table: Mah Nishtana (The Four Questions), The Four Children, and the Ten Plagues.

While we know that we have a beautiful musical tradition for the seder with songs and melodies that are central to our celebrations, after the experience of this collaborative seder there are spirituals that I would like to add to my seder in the future.

The first is “The Storm Is Passing Over.” Alongside the auditory link to the name of our Jewish festival, the words ring true for Passover, speaking of the courage to embark on a journey and the darkness of the night; it reassures that the storm will pass and the morning light will appear. It is a song that encapsulates the Exodus and the journey from slavery to freedom.

The second is “Ain’t Gonna Let Nobody Turn Me Around.” This song speaks of the journey to freedom’s land, and in our Jewish context we can hear it to be about the struggle to reach a Promised Land of justice, righteousness, and equality.

The words, music, and faces on the screen were a real reminder of the fact that whatever or whomever might try to divide us, there is so much more that unites us.

For the members of Temple Shir Tikva and the Greater Framingham Community Church sharing in the seder, it was clear that our shared sacred texts, our shared connection to the Exodus story, and our shared aspiration to build a better world were sources of immense pride and unity.

Together we are still on that shared journey toward a Promised Land, a society and world where everyone is valued, respected, and honored regardless of their race, religion, gender, or sexuality. Emerging from that seder, I feel confident that we will get there together.