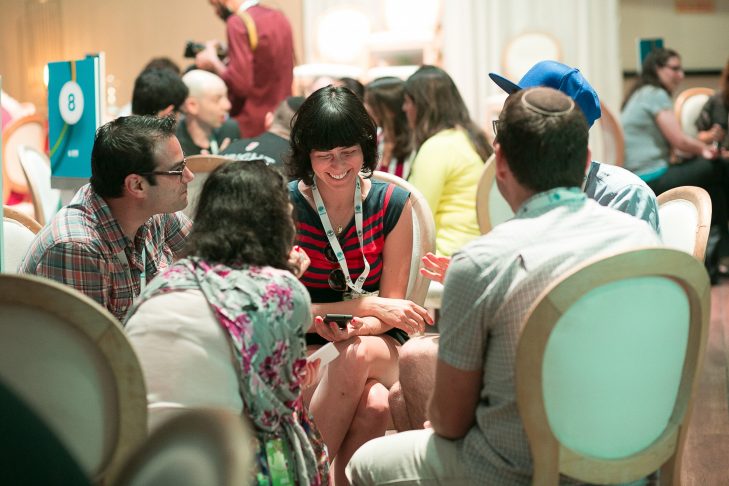 ROI—return on investment. It is generally thought of as a business term. But the staff at the Charles and Lynn Schusterman Family Foundation, particularly Lynn Schusterman, have repurposed the concept to cultivate young Jewish activists from all over the world. In Schusterman parlance, ROI is its own community with over 1,500 members in 50 countries. Its annual summit, a signature event that takes place in Jerusalem, is now in its 10th year. And the event distinguishes the Schusterman Family Foundation as an organization that not only does classic grant-making for places such as B’nai B’rith Youth Organization, Hillel and Birthright Israel, but also creates its own programming, at which ROI Community is at the center.

This year’s ROI Summit begins the week of June 26 and will include two Boston activists among its 150 participants. Matan Koch is a disability advocate who was tapped by President Obama to serve on the National Council on Disability. A lawyer by training, Koch moved to Boston in 2014 after his three-year term ended. In a recent phone interview, he lauded Boston as a city with exceptional services for people with disabilities and an ideal place to work as a disability consultant. Koch’s clientele includes Combined Jewish Philanthropies and a number of synagogues and non-profits. He has been invited to run workshops and trainings for professionals throughout the country. He also teaches Torah classes on universal inclusion using the story of Moses approaching the burning bush. “God knew,” he says, “that although Moses thought he was not the right guy [to talk to Pharaoh], God, in his perfect omniscience, knew he found the talent that he wanted for the job.”

Koch, who uses a wheelchair, further explains that the Torah is not clear on whether Moses had an actual disability or was simply afraid of public speaking. “One doesn’t have to have a disability to face a barrier to inclusion,” says Koch. He further notes that Aaron served as his brother’s mouthpiece. “We do things to help people overcome a barrier,” he says. “Aaron was a reasonable accommodation for the concerns Moses expressed.”

Koch will be speaking at the summit about how he has “ignited a fire” for universal inclusion. “I do what I do because of tikkun olam [fixing the world],” he says. He subscribes to a piece of wisdom from Pirke Avot, or Ethics of Our Fathers, which he translates as, “It is not upon you to finish the work, nor are you free to abstain from it.” He says, “I like to think that what I’m doing is identifying what my specific part looks like and doing it to the best of my ability.”

James Cohen, Keshet’s director of development, will also be in Jerusalem next week as an ROI delegate. Cohen has been a dedicated advocate of LGBT inclusion in Jewish life for a number of years. He’s particularly excited to go to ROI to forge new relationships and problem-solve with others in various Jewish communities. “LGBT inclusion is my work at Keshet,” he said in a telephone conversation, “but there are also financial challenges in the Jewish community, like day-school affordability.” Cohen speaks from personal experience as the parent association chair at his younger son’s day school. Not only is he committed to making day school a reality for families, he’s also intent on welcoming more LGBT families into those schools. “We’ve come a long way regarding LGBT inclusion,” he notes. “Years ago it was not a topic openly discussed as a priority. As we’ve seen from many movements and organizations—particularly the Reform movement and Conservative rabbis—we’re beginning to move from discussion to action. But there are still places in our community where LGBT people are not made to feel welcomed and embraced. We have work to do.”

Justin Korda, ROI’s executive director, says that inclusion is one of this year’s themes at the summit. “Every year we look to concentrate on issue areas and take a more significant focus,” he says. “This year it’s disability inclusion. For the first time, two participants with [significant] disabilities will be joining us at the conference.”

Korda says that many discussions will purposefully encompass the topic of inclusion. “[Inclusion] has been something Lynn Schusterman has felt very strongly about, whether it is gay Jews, Jews of color, people with disabilities,” he says. “We’re motivated by Jewish values and what is affecting the Jewish community. We also focus our efforts on a safe and strong Israel, as well as think about the notion that we as a Jewish community are all connected globally.”

“Our motto,” asserts Korda, “is this idea of a thousand [people] connecting millions to Jewish life and to Israel.”