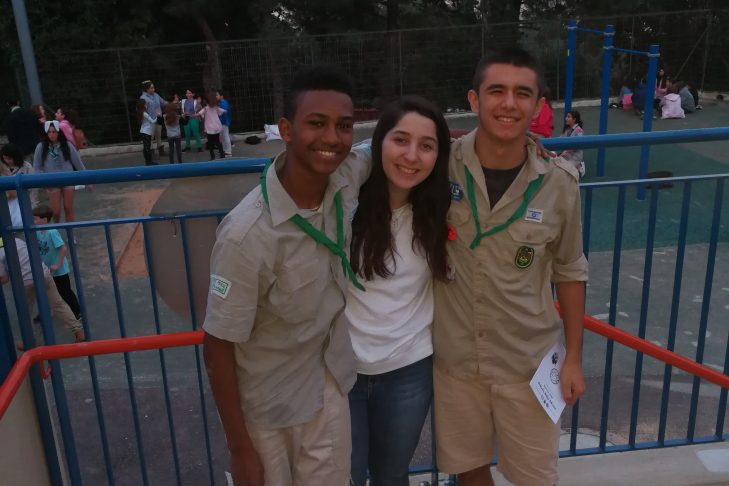 Good evening, my name is Shira Becker and I would like to share with you my thoughts that are inspired by the legacy of Dr. Martin Luther King Jr. I am from the city of Haifa in Israel and am doing a voluntary gap year in a program of the Combined Jewish Philanthropies. Along with my partner, Bar, who is also here tonight, we have postponed our mandatory military service in the Israel Defense Forces to serve as young ambassadors for Israel and work in the Jewish community of Greater Boston.

One of the things I find similar between Israel and the U.S. is the fact that they’re both nations of immigrants. If you’ll look at a world map, you’ll see people really came to Israel from all around the world. When Israel was just a young country, after WW II, most of its citizens came from Europe or North Africa. My ancestors came from Poland. During the ’50s, Israel had two big operations to bring Jews from Arab countries in Asia, such as Yemen and Iraq. Later, in the ’70s, there was a very big wave of Jews from the former Soviet Union. Every time, when new cultures joined Israel, the people were facing some struggles fitting in. They didn’t all know how to speak Hebrew, they weren’t used to the weather and many of them had financial problems because they had to leave most of their property behind.

On May 24, 1991, Israel brought 14,000 Ethiopian Jews to Israel in less than 34 hours! Once again, the Israeli society had to face the issue of accepting so many new citizens, while the new citizens had to learn a new language, get used to their new homes, find new jobs and make sure everyone in their families are healthy and safe.

When I was a junior in high school, I was a counselor in the Israeli scouts. That year, I was working with the seventh grade. My group was all kids that go to a pretty expensive private school, and I had one kid in my group, Yossi, who was going to that school as part of a scholarship program. Yossi joined the school in the fourth grade, he knew all the other kids in the group very well, he was friends with them and he never felt they were treating him any different because of the fact that his family didn’t have enough money to pay for the school on their own.

Yossi was an awesome kid. He always loved helping everyone who needed help, he was very into music and was an amazing hip-hop dancer. Yossi loved watching anime, and I could sit for hours listening to him trying to explain what was happening in the show, who the characters were and why the dragon was so important. In the scouts, Yossi was just like any other kid, except for the fact he was the only Ethiopian in his grade.

As Yossi’s counselor I noticed some things. Whenever I would call his mom, Yossi would pick up the phone, and when I asked him about it once, he said his mom’s Hebrew is not very good, and it is easier for her when he translates to “Amharic,” the native language in Ethiopia. Most of the kids in my group lived up on the Carmel mountain, but Yossi and his family lived down by the shore in a neighborhood called Nave David, a neighborhood known for its big Ethiopian population, and they couldn’t afford a car. A group of volunteers from the Boston-Haifa Connection agreed to drive him home every week, so he could enjoy the scouts just like any other kid. In the beginning of the year, Yossi received the scouts’ uniform pants and shirt for free so he could wear them like the rest of the kids in his grade, but then I noticed he was not wearing his uniform anymore. Most of the time, when I would ask him why he was not wearing the uniform, he would say it was because he forgot to bring it, until one time he told me he lost it but was embarrassed to ask for a new one.

Yossi never seemed any different to the rest of the kids in his grade, but I got to know some of the struggles he was and still is facing, struggles I could never truly understand because I never had to experience.

Dr. Martin Luther King Jr. taught us all that our skin color, the shape of our eyes, our accents, don’t matter and they shouldn’t be the thing holding us back from living together as a whole. The Ethiopian Jews in Israel are still facing some challenges, just like the ones Yossi shared with me. People from different cultures all around the world are working their way in to new societies, but I believe it is only getting better, and thanks to all of you who are here today, it will keep getting better.

Thank you for the honor of speaking with you this evening, and may we continue to pursue the vision and dreams of equality, tolerance and mutual respect that Martin Luther King stood for.