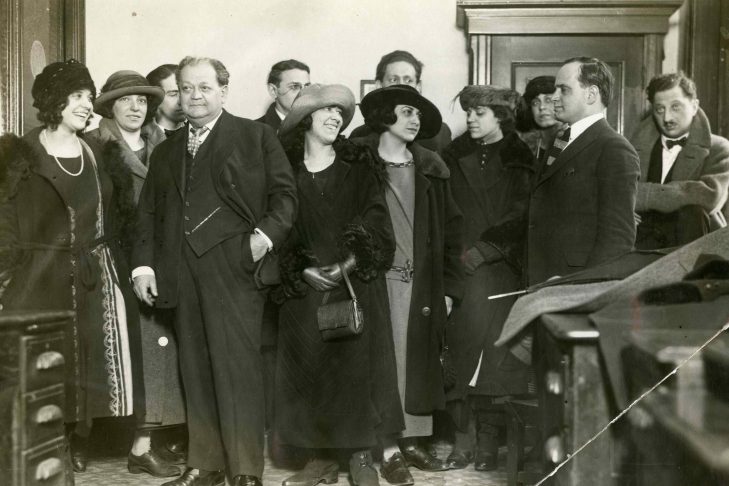 The original Broadway cast of “God of Vengeance” (Courtesy photo)

Sholem Asch’s play “God of Vengeance” caused quite a stir when it came to Broadway in 1923. The play, a mainstay of Yiddish theater since its debut in 1907, is widely known for its frank depictions of sexuality and prostitution in a Polish Jewish shtetl. The drama centers on the efforts of Yankl, a brothel owner, and his wife, Sarah, a former prostitute, to find their teenage daughter Rifkele a respectable Jewish husband. To show his community that he has turned over a new leaf, Yankl has commissioned a Torah scroll. In addition to bestowing Yankl and his family social and religious status, the scroll is intended to be an amulet for the “good and pure” Rifkele.

Yankl has engaged a rabbi, who is also a matchmaker, to open doors in society previously closed to him. But Rifkele complicates the situation by falling in love with Manke, who works for Yankl as a prostitute. The love and affection between the two young women is pure and affecting. Their onstage kiss in 1923 was noted as the first depiction of lesbianism in the Yiddish theater and landed the entire company in court on charges of indecency.

As complex as Rifkele and Manke’s relationship is, it appears that the rabbi, who ostensibly has the closest connection to God, is even more complicated for the way he defies the shtetl’s religious and communal norms. He looks the other way when Yankl offers a hefty dowry to compensate for the family’s unsavory business, and the rabbi brings forward a worthy candidate without a second thought. The rabbi takes advantage of the fact that Yankl is desperate to buy his way into the good graces of God and society.

Asch was 26 when he wrote “God of Vengeance.” He was a former yeshiva student whom David Mazower, Asch’s great-grandson, has described as an “intensely spiritual man. Although he rebelled against his traditional education, my great-grandfather wrestled with God, and his own version of faith throughout his life. His strongest works reflected that.”

Mazower was in the audience at the stage reading of “God of Vengeance” at the Lyric Stage Company last week. The Jewish Arts Collaborative presented the play and sponsored a post-performance talkback with Mazower and Barbara Wallace Grossman, the play’s director. Mazower is also the editorial director of the Yiddish Book Center in Amherst and co-editor with Aaron Lansky, the Center’s founder, of the English-language magazine “Pakn Treger.”

Mazower said that during the time Asch wrote “God of Vengeance” he was exposed to the latest literary trends in Polish, German and Russian modernism. He had seen the works of Ibsen and Shaw performed, and he was regarded as a cosmopolitan European writer. Asch’s “brothel play,” as it came to be known, was translated into Polish, Hebrew, English, Italian, French, Dutch, Czech, Swedish and Norwegian. A silent film based on the work was also released.

The timeliness of the stage reading of “God of Vengeance” coincides with Huntington Theatre Company’s presentation of Paula Vogel’s powerful play “Indecent” at the end of the month. Vogel’s drama depicts the turbulent history of Asch’s play and incorporates some powerful passages from it.

As Mazower wrote for Yiddish Book Center, “Powerful dramas [like ‘God of Vengeance’] are like good jazz tunes—they invite creative riffs and artistic tributes. Over the last 20 years or so, [‘God of Vengeance’] has been updated, revised, adapted and reworked almost as many times as it has been staged in the original.”

In their 30-minute discussion, Mazower and Grossman discussed how the play comes across in the 21st century. Grossman worried about the play’s potential anti-Semitism. “It was such a savage excoriation of the Jewish community at the time,” she said. “It portrays some of the characters in such a negative light, and there are several depictions of fraught relationships. However, I love Rifkele and Manke’s positive energy, and I love the fact that these women had agency.”

Mazower noted that his great-grandfather was aware of the play’s anti-Semitic overtones, but also sought to convey a universal message about the difficult relationship between parents and children. “It’s also a play about striving and wanting to be different, and that accounts for its success in translation,” he added. He further observed that Asch’s depiction of young women made him a hero to many female fans. From his earliest stories, he challenged authority figures that included fathers and rabbis. Asch was also not hesitant to dramatize men abusing women. The violent scenes in “God of Vengeance” are eerily relevant today as women are still brutalized and trafficked for sex.

Yankl is both the play’s villain and its anti-hero. Unlike his sturdy wife and his passionate daughter, his survival is uncertain. The audience may not forgive Yankl, but neither are they in a position to judge him. “Yankl is a sinner; his wife is a sinner,” Mazower said. “It’s a black-and-white world. It’s heaven or hell. Asch’s response would have been that you couldn’t write a play about only virtuous Jews. He didn’t care if he wrote a moral or immoral play. He only cared about writing a good play that had an impact and spoke to people.”