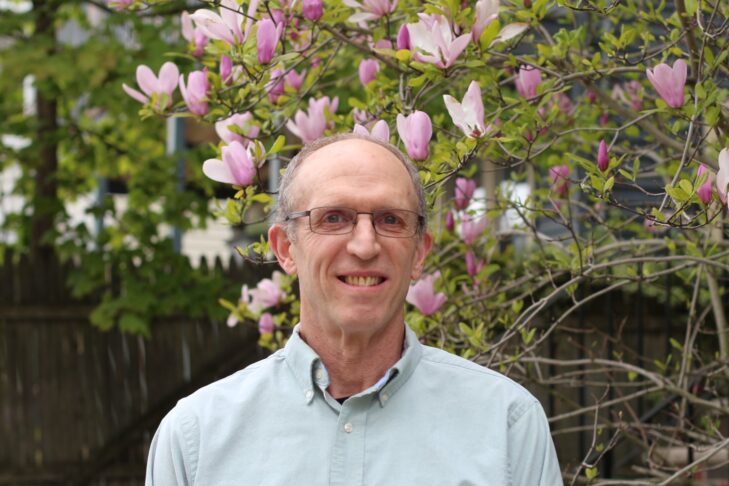 Asking the right questions can make all the difference in the world. Just ask Dan Rothstein, co-founder and executive director of the Cambridge-based Right Question Institute. In the spirit of Jewish tradition, Rothstein’s life’s work has been to ensure that people know how to ask effective questions that elicit helpful answers. Inherent in his quest is a deep sense of tikkun olam—a commitment to social justice issues—that he has pursued locally and in Israel.

Rothstein was recently honored with a “16 Over 61 Award” from the Marlene Meyerson Jewish Community Center in Manhattan and The Forward. Honorees were selected for their creativity, leadership and initiative. As the award announces, the 16 winners range in age starting from 61. Rothstein’s fellow awardees include rabbis, creative artists, social justice advocates and LGBTQ activists. In a recent Zoom call with JewishBoston, Rothstein noted he found the award’s JCC connection particularly meaningful, recalling that his father had been director of the Louisville, Kentucky, JCC in the 1960s and ‘70s.

Rothstein grew up in Louisville and was influenced by his parents’ civil rights activism. In the 1960s, Louisville unofficially sanctioned Jim Crow laws. However, Rothstein said that after Martin Luther King Jr.’s assassination in 1968, his father created a program to improve relations between the Black and Jewish communities. His mother also supported the Black community through her involvement in Hadassah.

A resident of Somerville for many years, Rothstein first came to the area as a Harvard University undergraduate. Upon graduation, he went to Israel on a Fulbright scholarship, where he worked in youth and community organizing with the Mizrahi community. He met young Mizrahi leaders pursuing various advocacy efforts and collected oral histories of the community’s arrival in Israel.

He returned to Harvard to work on a Ph.D. with the renowned educator and psychiatrist Robert Coles. Coles was an ideal mentor to guide Rothstein. “He was known for listening deeply and collecting stories from people whose voices were not usually heard,” noted Rothstein. Coles supported Rothstein’s historical research as he worked to record the oral histories he had amassed in Israel. The result was a dissertation about the Mizrahim’s first years in the State of Israel.

Rothstein and his young family returned to Israel, where he and his wife, Ana Karchmer, worked at Ben Gurion University’s research center in the Negev. During their time there, the couple designed and facilitated a two-day training program with Bedouin women, which was sponsored by the New Israel Fund and the U.S. Department of State. Rothstein said the experience was an “economic empowerment project” for the participants. It was also an event that Rothstein regards as “one of the greatest stories that comes from knowing how to ask the right questions. It was very moving for my wife and me to see these women, who had to ask their husbands for permission to attend the training, to take this idea of asking questions and advocating for themselves.”

Added Rothstein, “There was a parallel to what I learned in Jerusalem and the Negev to the origins of the work that the Right Question Institute does.” He brought those insights to his work with the Latinx population in Lawrence, Massachusetts. Supported by a foundation grant, Rothstein worked with parents in that community on issues around dropout prevention. Initially, he created a list of questions for parents to ask about the matter. Parents then asked for another list of questions about homework and discipline policies. The requests increased, and Rothstein and his colleagues realized “we were creating greater dependency by giving people a list of questions. We discovered that this was a serious problem that had long been overlooked. It was an obstacle to effective advocacy, which is knowing how to ask your own questions.”

In 1990, Rothstein and his colleague Luz Santana founded the Right Question Institute. The Institute soon morphed into an educational initiative, which included teaching people effective strategies to advocate for themselves, their families and their communities. Rothstein traveled across the country to teach sugarcane plantation workers to advocate for themselves after they lost their jobs in Hawaii. He was in solidarity with Mexican immigrant parents as they advocated for their children caught up in school violence. In New Hampshire, welfare recipients stood up for themselves when their benefits were cut.

Rothstein and Santana wrote a book, “Make Just One Change: Teach Students to Ask Their Own Questions,” showcasing their overall strategies for formulating effective questions. “People need to learn quickly the skills that doctors as diagnosticians, lawyers as cross-examiners and scientists and journalists as researchers need to know,” he said. “The challenge was teaching what is actually a very sophisticated skill to people with limited experience and education.”

The first step in asking the right questions is what Rothstein calls “the question formulation technique”—a simple yet rigorous process in which people learn to distinguish between open-ended and closed questions. “It’s a revelatory moment when people discover that how you ask a question can determine what kind of information you’ll get,” Rothstein said. “It is a very significant leap in understanding the power of asking questions. The second step asks people to prioritize their questions using a set of criteria. Prioritization allows people to be more strategic about what they need to learn to have their needs met.”

The question formulation technique has been adapted by organizations such as the National Science Foundation, National Geographic Society and Library of Congress. The technique has also been deployed to advance democracy. The Right Question Institute posits: “Individual citizens confidently participating in their common and ordinary encounters with public agencies and services will produce examples of what we call ‘Microdemocracy,’ a starting point for democratic action. Microdemocracy is the cornerstone of a strong foundation for a more just society.”

It turns out that Rothstein has created “micro democracies” throughout his long and distinguished career. His advocacy has been based on close listening, empathy and devotion to making the world a more just and equal place for the underserved. “I am very fortunate to have been able to do this work at different times and in different places,” said Rothstein. “It’s been a very moving experience.”