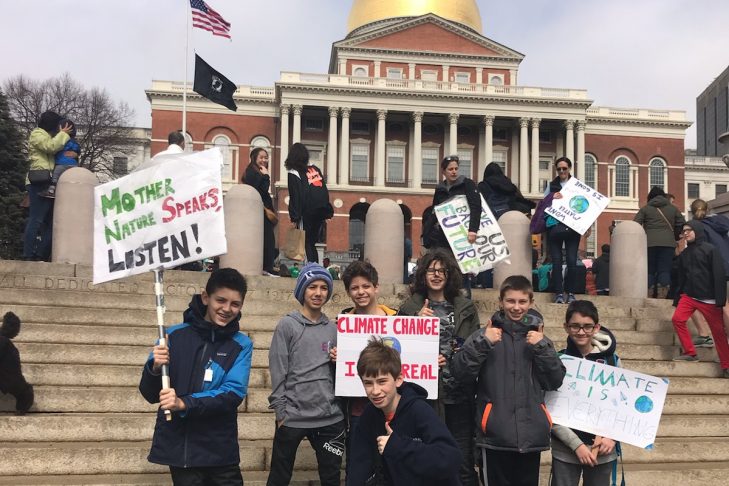 On March 15, 2019, there was a march in Boston to protest our government’s silence on climate change. For most, the day came and went, but for middle schoolers Sam, Zach, Hannah, Bella, Josh, Ziv, Isaac, Wyatt, Oran, Nina, Leah and Elah of The Rashi School, the morning was spent on the steps of the State House with hundreds of kids from all over Massachusetts.

“I think there are a lot of people who are ignorant about climate change,” said seventh grader Nina following the rally. “An international study has warned us that we only have 12 years until we can no longer make a difference to the earth, so it’s really important that we all do something to fix it now. It would be helpful if everyone was aware of the problem. That’s the first step.”

The official stance of the teen leaders who organized the strike was that elected officials support the Green New Deal, stop all fossil fuel infrastructure projects, make decisions based on scientific facts, declare a national emergency on climate change, require climate change to be incorporated in K-8 education, preserve public land and wildlife, and protect the water supply.

To better understand our students’ concerns for the future of our planet, we sat down for a conversation.

What was it like to join the climate change strike?

Ezra: When we arrived, there was a group of people in front of the State House. There was a lot of cheering and yelling and some inspirational speeches. People sang songs and shouted cheers and there was a marching band at the end. There were also a lot of interesting signs. I liked the signs that were funny but also serious. There was one with polar bears on a thin sheet of ice that said, “Did the polar bear get a say in its fate?” It made me think that our choices are affecting everything on the planet; it’s not just humans.

What inspired you to get involved?

Oran: I was inspired to go to the climate change strike because it’s a huge problem in the world.

Zach: It feels like the only issue that can affect anyone—no matter who you are, you’re not safe from it.

Ezra: As a right, everyone should be able to have access to nature. It’s important to me to protect the earth so that people in the generations after ours can have the same access to nature that we’ve had.

Bella: A lot of people care more about money than our earth. It’s not surprising, but it’s something that I really want to change.

What did you hope to achieve as a result of attending the strike?

Oran: I wanted to get the government to do something about climate change.

Ezra: I hoped to scout out how many people would join and how much movement there would be for Boston. I know that Massachusetts wants to help reverse climate change. Indirectly, I hoped it would pressure the Massachusetts government to take action on the issue. The strike was showing the world that people will band together and fight for what they care about.

Many students decided not to attend the rally for a variety of reasons. As representatives of The Rashi School, what message would you like to bring back to your classmates?

Ezra: There are scientists out there who are saying that our world could be destroyed in less than 150 years. That’s too little time. Earth is our planet—we need to save it. We need to stop ignoring the signs of climate change and band together to get as much research as we can toward this issue. I liked the energy from the crowd and how focused and determined everyone was. We didn’t know each other, but we were one big community working together.

Zach: I hope they are aware of climate change and how they can help everyone else who is protesting against it. It’s important to help.

Josh: Because we only have 11 years to make a change!

Ziv: It was cool to be part of something bigger than ourselves.

Nina: I thought it was cool for people with common beliefs to come together and join their voices as one to project to the politicians how much we care about issues.

Leah: People should stand up for what they believe in and not be afraid to speak out about an issue that’s happening. 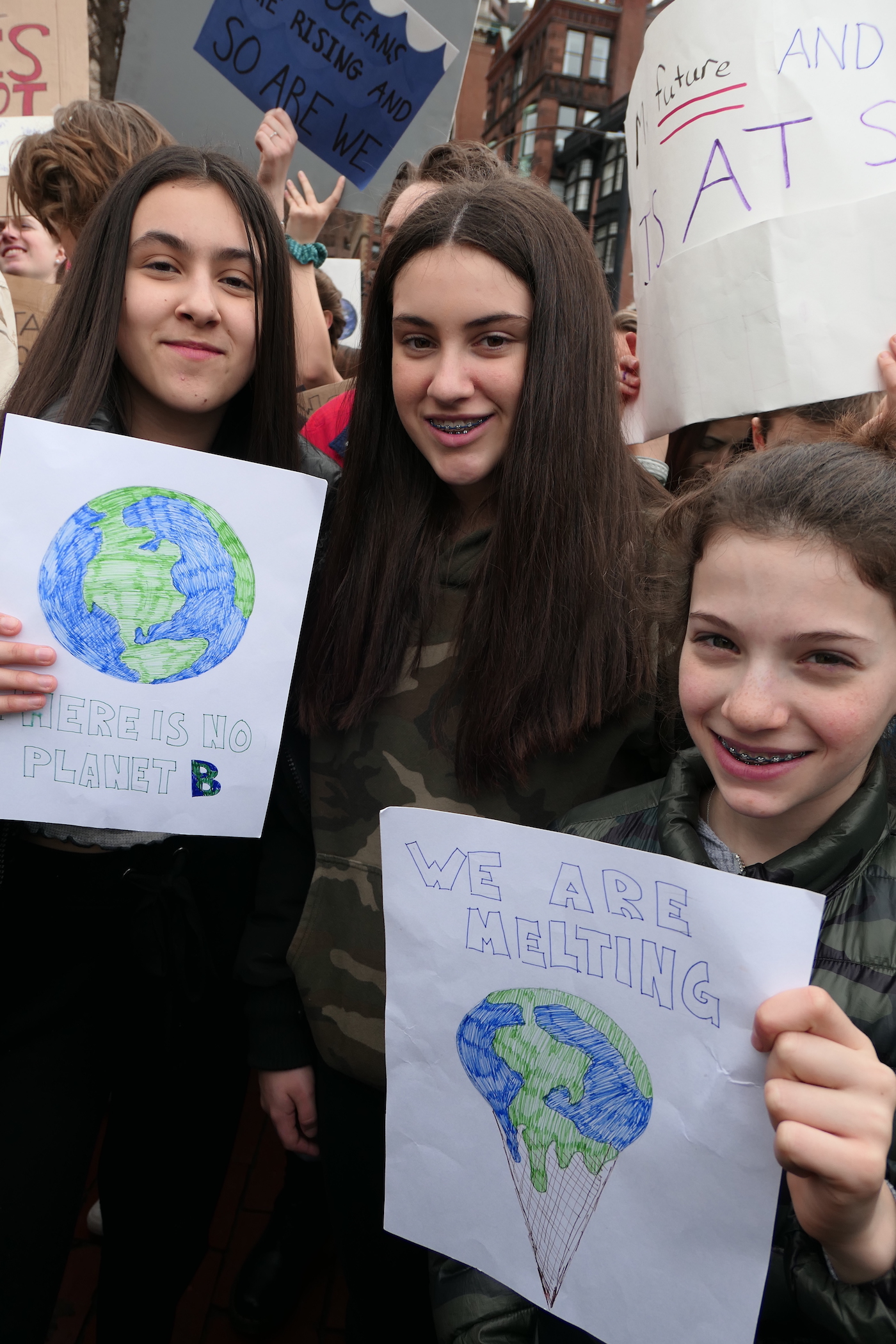 It was clear you took the time to make posters. Did you think it was an important piece to have at this rally? What did your posters say?

Oran: Mine was, “Climate change is real.” It had a melting ice cream cone and the earth was the scoop. The signs expressed that people took time and effort in thinking about fixing climate change.

Ziv: Mine said, “Climate is everything.”

Ezra: My sign said, “Mother Nature Speaks: Listen.” People aren’t paying attention to the signs of climate change. It’s an issue; it’s here and it’s happening right now. We need to be prepared to reverse the effects of climate change before it’s too late.

What are some things you are doing now to impact climate change?

Leah: At my house, we turn off the lights if we’re not in the room, and my family has an electric car.

Hannah: I use reusable things, like plastic forks and things.

Oran: I make sure I am aware of recycling properly and putting trash in the trash bin. I conserve water and take shorter showers.

Zach: There’s a group that I’m in at my temple that works to make bar mitzvahs more environmentally friendly. We’re putting together some recommendations to share with the leadership soon. My family also has solar panels on our house.

Nina: I used to go on bike rides with bags and I would fill them with trash to dispose of properly. Last year, when I was running for class government, I said that I wanted to bring composting to the school. My vision was to have a compost bin next to the recycling. We could have an assembly at school where we could be educated about the kinds of things that go into compost and recycling, and we could add a simple compost bin and we could save a lot.

Ezra: First, my family does a lot of biking and we use the car as little as we can. Instead of using the car, we use the bus and the T when we can. Hopefully next year, we’ll get an electric car. We’re also doing this community solar project where we pay money to have solar panels installed in other places. We recycle and compost and try to throw away as little as we can. We have a huge amount of reusable things; we don’t really do single-use stuff. We try to get outdoors and get exercise and stay connected to nature.

Bella: Definitely. I do take the bus.

Sam: I try to bike as much as I can instead of taking the car. I bike to the grocery store to get ingredients when I make dinner at home. Also, builders should be more aware of ways that homes need to be built to accept things like solar panels. Sometimes, your roof doesn’t face the right direction or something.

Nina: It would be helpful if trash cans were closed or had a flap so trash doesn’t blow out in the wind. In my house, we have a trash can that compacts trash so you don’t have to go as much to the landfill so there’s less flying around everywhere.

Josh: But even when you do pick up trash, it still goes to a landfill, which is also a problem. 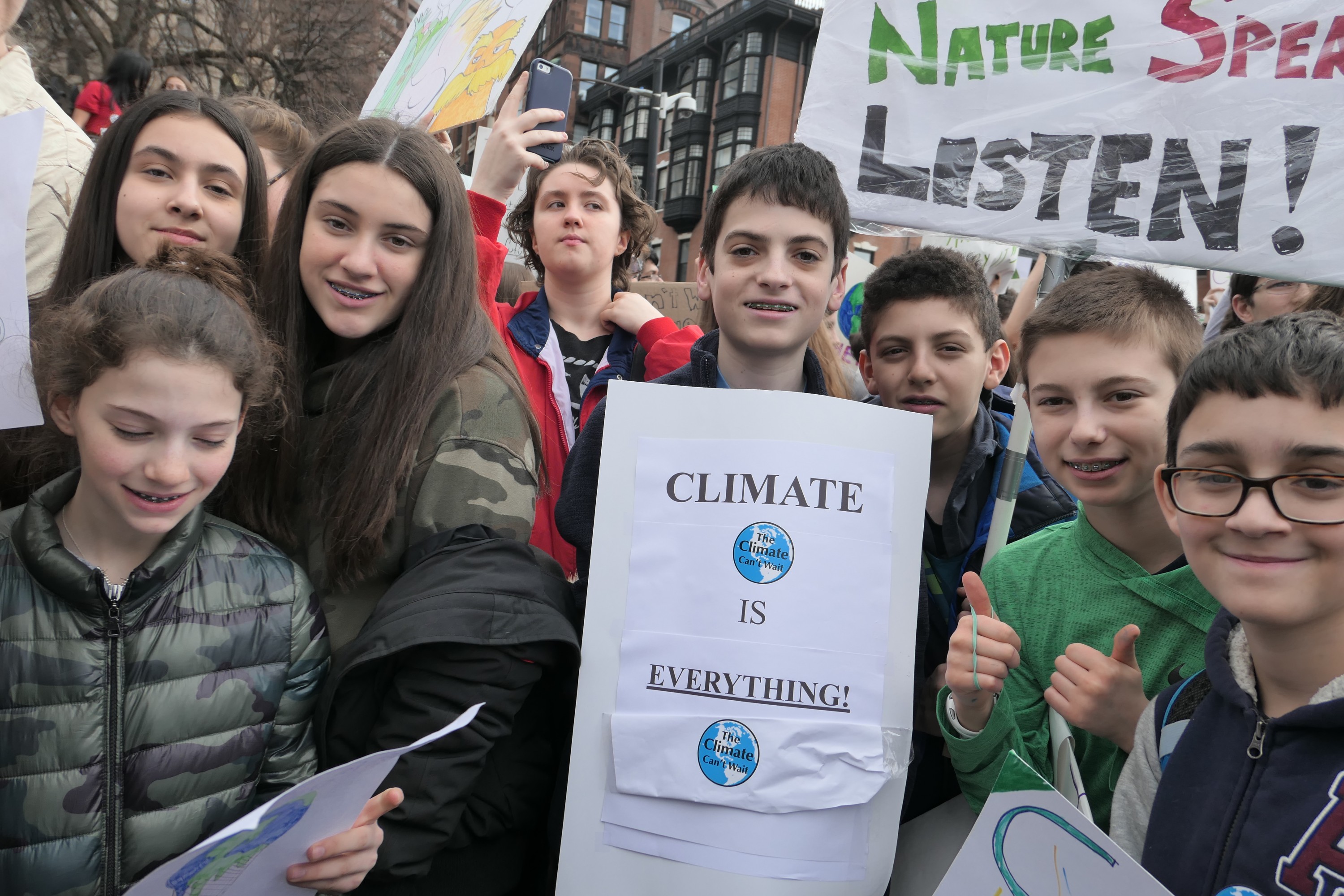 What are ways other people can help with climate change?

Ziv: Change your diet. Vegan, vegetarian or pescatarian diets are a lot better for the environment.

Ezra: Start small. If your family doesn’t have one, get a recycling bin. If you don’t compost, start. Try to cut down on single-use items. Instead of a plastic water bottle, get a good one that you can use for a long time. Try to use public transportation more. Cut down on how much you use your car. Do more outside and get more connected to nature.

Nina: Conserve our outdoor spaces and pick up trash. Think of what you do that produces carbon emissions and find an alternative.

Bella: Reduce driving and pick up trash. If you can, and I’m aware that not everyone can, try to get solar panels or an electric car or a hybrid. Compost and recycle; it’s not that hard. Be aware of the issues.

Isaac: Just be aware and stop saying that it’s not a problem.

Josh: Even if it’s a bit out of your way, pick up trash. If each person does that, it’ll reduce garbage.

Sam: Teach people that climate change is a real thing. So many people want to deny it, and kids learn from their parents. Break a cycle; that will eventually help a bunch of people. Do what you can, even if it’s small. It will help the world.

Ezra: I think that it doesn’t matter who you are, you can make a difference and every small difference adds up. But we can only make a change if everyone does it. Everyone has to contribute to the solution.