Close
Never miss a great event again!
Get the best Jewish events delivered to your inbox every Thursday with JewishBoston This Week.
By signing up, you agree to our Terms of Use and Privacy Policy.
My dad was the strongest man in the world. At least that’s what I believed and felt for much of my childhood. I was never fearful of anything when the two of us were together, which was quite often during my younger years as my mom worked on Saturdays.  Dad–Mike to his coworkers, Michel to my mom, and Michal to his buddies, was born into a poor family in Kalisz, Poland. He was one of many children, and when his father, my grandfather, made his frequent trips to the US, Dad would become the family’s substitute father figure. Unfortunately for my dad, on the last trip my grandfather attempted–the trip where he was finally taking his family with him–an eye infection prevented my grandmother (and thus the rest of the family) from going to “America the Golden.”  And the rest, as they say, is history–a very sad history. After experiencing the horrors of over fourteen concentration camps, one of them being the most horrible, Treblinka, my dad was left alone. I would come to find out many years later, only after reading a newspaper article about him, that his brawn, knowledge of mechanics, and sheer luck enabled him to survive.
He was a simple man, with simple needs. He had a great memory–could pick out someone in a crowd he hadn’t seen in forty years and knew exactly where and when that last time was–and although he was not one for small talk, he was a great storyteller. How he and my mom (Miss Fancy Pants), ever got together was one of life’s great mysteries to my sister and me. “The war did strange things to people,” my mom would like to remind us. “If not for the war…,” she was wont to say. They met in a displaced persons camp in post-WWII Germany.  She allegedly was a witness to a crime, and he was the chief of police. He was good-looking, strong, and employed. That was good enough for her. Theirs was a tempestuous marriage, to say the least, and how it lasted over fifty years is yet another of life’s greatest mysteries.
One of the favorite things I loved doing with my dad was visiting his cousin Molly who lived in the projects near Coney Island. Every once in a while we would go on some rides, but mostly we went too see Molly. She lived in a very tall apartment building where the halls echoed with the sound of our heels and the elevators smelled of ammonia. Molly was his “American cousin,” the daughter of his uncle. There was always a tuna sandwich on a soft, braided challah roll awaiting me on those visits, and I munched happily in the kitchen as I listened to my dad and his cousin speaking in hushed tones in the living room. Every once in a while I caught a snippet of what was said–most of it was health-related (Molly’s) or marriage-related (Dad’s).
Some of our other outings took us to Pitkin Avenue, in the Brownsville section of Brooklyn. Back then, Brownsville was the cultural center of Jewish life in Brooklyn, and Pitkin Avenue was it’s main commercial strip.  Much of the street was taken over by pushcarts from which vendors would sell their wares. A special treat we would bring home from those trips was marble pound cake. The paper-wrapped cake came in long loaves from which smaller slabs were cut. The yellow part of the loaf was soft and buttery, while the swirly ribbon of chocolate that ran in and out through the yellow cake was moist and fudgy. My dad was not a big sweets eater, but he did like this cake (simple, always simple), and he would wash down a slice of it with a big tankard of coffee. He never drank coffee from a normal-sized cup, always a tall glass tankard. He had a large collection of tall ceramic mugs imprinted with “World’s Best Dad” that were given to him on birthdays and Father’s Day, but invariably the glass one was the one he would choose. Last week marked the tenth anniversary of my dad’s passing, and when I think of him at this time of year, at Hanukkah, I think of my mom saying, “Michel, if you’ll grate a few potatoes, I’ll whip up a batch of latkes.” (No food processor for them back then.) He’d then pull out the four-sided box grater and together they would get to work.
I very much doubt the pushcarts of Pitkin Avenue are still in existence. Soon after I discovered the wonderfulness of the marble pound the Jews began to skedaddle from Brownsville to other parts of Brooklyn, such as  East Flatbush and Canarsie, and even to Long Island (better known as the hinterlands). After that, we no longer made the trek to the neighborhood. The marble pound cake did survive, however. I’m sure the one I tasted back then was oil-based, not really buttery at all. (How was I to know everything had to be parve??) This one below is buttery, and a whole heck of a lot better than the original. But memories are memories…. 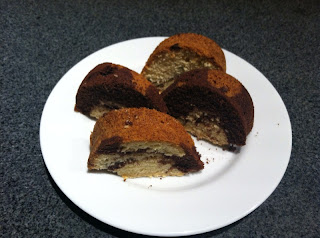 MARBLE POUND CAKE
(adapted from a recipe by Marcy Goldman)
Vegetable oil cooking spray
2 cups all-purpose flour
2 teaspoons baking powder
1/4 teaspoon salt
1 1/2 sticks (6 ounces) unsalted butter, softened, plus 3 tablespoons melted
2 tablespoons unsweetened cocoa powder, preferably Dutch process
1 1/3 cups granulated sugar
2 large eggs
1 teaspoon pure vanilla extract
1/2c. buttermilk
Preheat the oven to 350°. Spray an 8-by-4-inch loaf pan with vegetable oil cooking spray and line it with parchment paper. Spray the paper.
In a medium bowl, whisk the flour with the baking powder and salt. In another medium bowl, combine the melted butter with the cocoa until smooth.
In a food processor, combine the softened butter with the granulated sugar. Add the eggs and vanilla and process until smooth. Add the dry ingredients and pulse just until combined. Add the buttermilk and process until smooth. Transfer 1 cup of the batter to the bowl with the cocoa and stir until smooth.
Spoon batters into the prepared pan in 2 layers, alternating spoonfuls of vanilla and chocolate to simulate a checkerboard. To create marbling, run a table knife (or wooden skewer) through the batters in a swirling motion.
Bake the pound cake for 25 minutes. Reduce the temperature to 325° and bake for 25 minutes more. Cover loosely with foil and bake for 15 to 20 minutes longer, or until the cake is lightly browned and a toothpick inserted in the center comes out with moist crumbs attached. Let the pound cake cool in the pan for 10 minutes, then unmold and let cool completely on a wire rack. Dust with confectioners’ sugar before serving.
MAKE AHEAD The cake can be wrapped in foil and refrigerated for 1 week or frozen for up to 2 months.