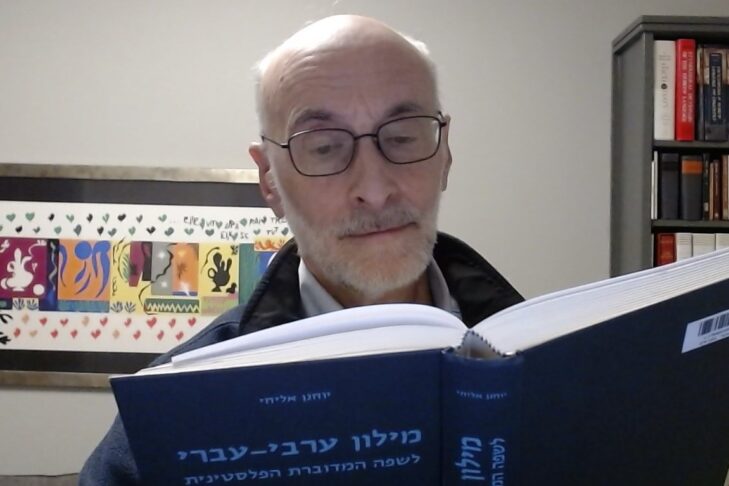 Every Wednesday morning at 10:30 a.m. Boston time—5:30 p.m. in Jerusalem—Harvey Bock, a Hebrew College faculty member, “Zooms” with a group based in Abu Tor, a Jerusalem neighborhood that was split by the armistice line in 1949 and reunited in 1967.

Bock, whose love of Hebrew stems from a day-school education in New York City, first studied Arabic 50 years ago during his junior year of college at Hebrew University. Decades later, after a career as a lawyer, and after moving on to a second career on the Hebrew College faculty, he decided to return to the study of Arabic.

“The similarities between Hebrew and Arabic are fascinating, but at the same time, the differences are large enough to make learning Arabic challenging,” he said. “Learning Arabic is further complicated by what linguists call ‘diglossia.’ In addition to the colloquial Arabic dialect that every child learns at home, in order to be literate they must also master standard literary Arabic, in which all formal discourse is conducted. And the colloquial dialect varies from region to region.”

But after investing effort in studying literary Arabic, which is what is generally taught in universities, Bock found that he still couldn’t communicate with Arabic speakers in Israel. “The situation is roughly like the middle ages, when every learned person had to know Latin, but in daily life people spoke in the colloquial regional dialects that became the Romance languages,” he said. “You can imagine the reaction back then if you had approached someone on the street and started to speak to them in classical Latin!”

So Bock decided to study Levantine Arabic, the colloquial dialect spoken in Israel-Palestine, Jordan, Lebanon and Syria. He started with self-teaching books, and then began working with tutors. His current instructor is a Druze teacher who lives in Haifa.

Then, last year, he learned from a friend who lives in Abu Tor that as part of neighborhood community-building efforts that the friend had initiated, residents of the neighborhood were teaching each other Hebrew and Arabic. Because of COVID-19, half of the group had moved to Zoom. Bock’s friend invited him to join.

“I jumped at the opportunity, and I am now a regular,” he said. Each week, 12 to 15 speakers of Arabic and Hebrew meet for half an hour of group discussion, led by two bilingual moderators. Bock and the other Hebrew speakers do their best to communicate in Arabic, and vice versa for the Arabic speakers. They then break into mixed groups of three or four, in which the participants chat alternately in each language, for a total of about 30 minutes, and help each other with vocabulary and grammar.

“There are typically more Arabic than Hebrew speakers, which is great for me. I am getting to know Palestinians not only from Israel, but from Ramallah and Jericho, too, as well as some very interesting Israeli Jews. And participating in this group has definitely strengthened my Arabic conversational skills,” Bock said.

Someone recently asked whether the group would continue meeting on Zoom once COVID was over. “Of course—how else would Harvey participate?” one of the moderators responded. Bock said, “I knew then that I was a full member of the group, and I felt like an honorary resident of Abu Tor.”