Close
Never miss a great event again!
Get the best Jewish events delivered to your inbox every Thursday with JewishBoston This Week.
By signing up, you agree to our Terms of Use and Privacy Policy.
Shabbat Resources
View all 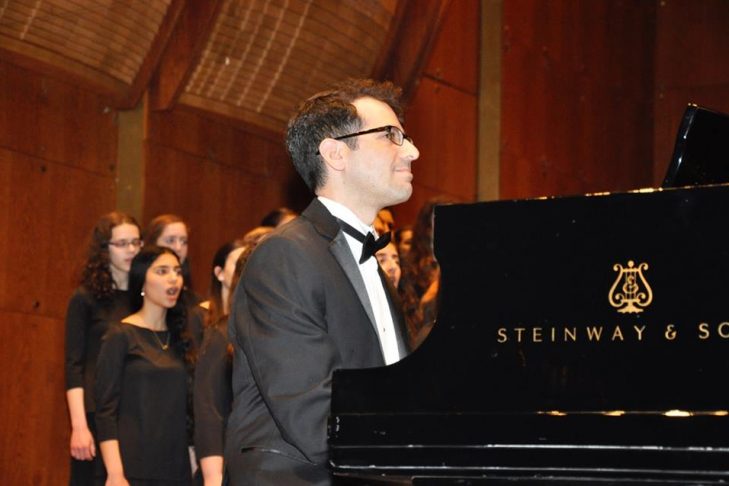 Including instrumental music in Shabbat morning services is not usual among Conservative synagogues yet, led by an energetic and dedicated young cantor, Temple Emeth in Chestnut Hill is reinvigorating the prayer experience with its Shabbat Unplug services.

Temple Emeth’s Cantor Michael McCloskey recalled that the impetus first came to him about four years ago when he was coaching a Hebrew College cantorial student, now Cantor Kevin Margolius. Having grown up in the reform tradition, in which music was often accompanied by instruments, Margolius sought to set the more traditional liturgy of the Conservative Siddur to harmony.

Inspired and intrigued, Cantor McCloskey sought to create his own harmonizations of Ashkenazic nusach hat’fillah (Central/Eastern European traditions of prayer-chant). In addition to building community through song and engaging learners of all ages as cantor-educator at Temple Emeth, McCloskey is a lyric tenor and accomplished pianist who was the conductor the Boston chapter of HaZamir: The International Jewish High School Choir.

“I see Jewish music as where East and West meet,” he noted. “I am influenced not only by the great arrangers — including Sholom Secunda, Abraham Ellstein and Max Janowski — but also by contemporary folk music, indie rock, jazz and world musical traditions. The great cantors and arrangers were translating ancestral musical traditions of the East into the Western idioms of their time, and that is what I’m seeking to do.”

To take the musical arrangements and give them life he partnered with David Wesson, a talented song leader and songwriter who has taught at the Rashi School and Cohen-Hillel Academy and served as director of congregational learning at Temple Ahavat Achim in Gloucester. The two men took inspiration from prayer innovators such as Nava Tehila and Joey Weisenberg, who are working toward the celebration and renewal of sacred Jewish music.

“We see ourselves as an ensemble of sh’lichey hatsibbur, representatives of the community, rather than simply a ‘band,” says McCloskey. “We are the oil that gets those heavy souls rolling, singing, moving, and sometimes even dancing.”

Shabbat Unplug also features a guest speaker and a catered kiddush luncheon. Past services have been sponsored by Keshet, the GLBTQ Jewish alliance, and the Ruderman Synagogue Inclusion Project. McCloskey and Samara Katz, Temple Emeth’s director of congregational learning, have distributed neon green bags for storing cell phones that say “Shabbat Unplug” to increase excitement and get the brand out into the community.

McCloskey invites the community to experience the next Shabbat Unplug on Saturday, Oct. 21, at 9:30 a.m. at Temple Emeth, 194 Grove St., Chestnut Hill. In honor of the Temple Emeth Women’s Rosh Chodesh Study Group, Cantor McCloskey will offer a teaching in honor of courageous Jewish women and their impact on Jewish living.