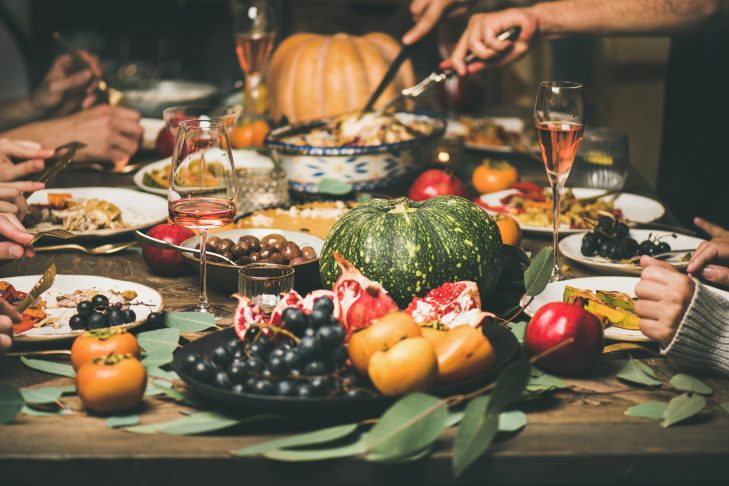 The festival of Sukkot is, of course, weeks behind us. But Thanksgiving is just around the corner. What’s the connection? Well, it depends whom you ask.

There has been speculation for many years about whether the Pilgrims were influenced by what they read in the Bible about Sukkot. The question is, was Sukkot a model for their new holiday, Thanksgiving? The semi-consensus among historians and theologians is that the specifics of Thanksgiving as we know it came from elsewhere, but the idea of giving thanks for the harvest did come from their reading of the Torah. It has also been suggested that they were influenced by reading about the bikurim, the offering of the first fruits (from Exodus) which occurred from Shavuot until Sukkot.

And, of course, there are opinions on all sides.

Before their travels to what later became America, the Pilgrims (also known as English Puritans) fled the intolerance of their beliefs in England and settled for awhile in Holland in 1608. At the time, Holland was known for religious tolerance. For about a decade, they lived among another persecuted group—a small group of Sephardic Jews who had been exiled from Spain in 1492. The Pilgrims were there long enough to interact with the Jewish population and would have witnessed their Sukkot celebrations.

The Pilgrims were well-versed in the Bible and knew that Sukkot, which they would have known as the Feast of Tabernacles or the Feast of Booths, was a harvest holiday. They celebrated the harvest as a modern day (for them) version of the Israelites’ holiday. Today, we might say they “identified” as Israelites. They compared their voyage across the Atlantic to the Children of Israel’s crossing the Red Sea, and they compared the hardships of their new land to the Israelites’ years of wandering in the desert.

“The Puritans did not believe in fixed holidays. If it was a good season, they would announce a thanksgiving,” Brandeis professor Jonathan Sarna noted in an interview with Robert Gluck of Jewish News Syndicate. “But it’s not like the Jewish holiday which occurs on the 15th of the month of Tishrei. They did not believe in that holiday.” Sarna pointed out that the Pilgrims were very familiar with what they knew as the Old Testament, and that “they were influenced by it…the notion that one would be thankful for a bountiful harvest was certainly one they would have learned from the Hebrew Bible.”

After the Pilgrims arrived in the New World in 1620, one of their leaders, William Bradford, led a service of thanksgiving. The group recited Psalm 107, “Give thanks to Adonai; for He is good, for His grace continues forever…” In fact, Bradford’s bible included notes from an English clergyman who quoted the Rambam, Maimonides, the most well-known Medieval Jewish scholar. (In his Mishnah Torah, Maimonides instructs Jews to recite a prayer based on Psalm 107.)

Rabbi Elias Lieberman of Falmouth feels there is a stronger biblical influence on Thanksgiving than do some scholars. “It is likely that they consciously drew on a model well-known to them from the Bible they cherished,” he told an interviewer. “Seeing themselves as new Israelites in a new ‘promised land,’ the Pilgrims surely found inspiration in the Bible, in the Books of Leviticus and Deuteronomy, in which God commands the ancient Israelites to observe the Feast of Booths—in Hebrew, Sukkot, ‘To rejoice before Adonai your God’ at the time of the fall harvest.” By the 1700s, Thanksgiving was celebrated throughout New England, and spread west with the migration of New Englanders.

“Both of these splendid holidays encourage us to stop and acknowledge the manifold blessings God bestows upon us each and every day,” Lieberman said. “Whether we accomplish that stock-taking over a slice of Thanksgiving pumpkin pie or beneath the leafy branches of a sukkah roof—or both—we understand and embrace the impulse which inspired our Pilgrim and our Israelite ancestors.”

Thanksgiving, by the way, did not become a fixed holiday in America until President Abraham Lincoln declared it as such in 1863. The holiday also did not have a firm date until Congress established one—the fourth Thursday of November—in 1941.

Tori Avey is a food writer who has a particular interest in how the foods and recipes of different cultures evolve. In her musings about the connection between the two holidays, she suggests that the cornucopia, which is somewhat horn-shaped, resembles the shofar.

Avey’s observation is indeed thought-provoking, but I think that’s a stretch. However, the other connections between Sukkot and Thanksgiving are certainly worth exploring, as well as celebrating.