Anita Rabinoff-Goldman began the work that became the spectacular art exhibit “Seeing Torah: A Visual Midrash” almost four years ago. She had moved from Albany, New York, to Waltham, Massachusetts, to be closer to family. In Albany, she had studied the weekly Torah portion with her rabbi and occasionally created a piece of art in response. 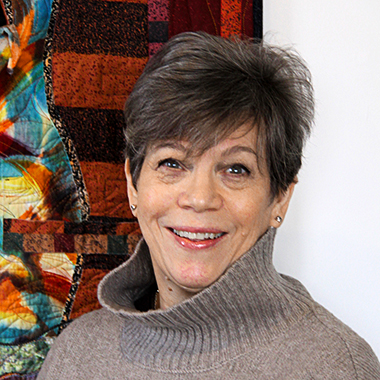 Newly retired, Rabinoff-Goldman looked for a meaningful project and returned to explore the weekly Torah portion in word and image. “There were many Torah portions I still had not read,” Rabinoff-Goldman told JewishBoston during a visit to her studio in February 2021. “Even the ones I had read I had not done so sequentially. When Simchat Torah came around, I thought now is the time to study and interpret the Torah portions in the right order.”

What transpired over her year of study was a stunning artistic interpretation of a verse from each of the Torah’s 54 portions. Each is a small quilt that Rabinoff-Goldman described as “painting with fabric.” She explained: “A quilt has three layers. It has a top layer of fabric, then comes the batting and then the backing. The quilting itself is the stitches that hold the three layers together, so it’s like a fabric sandwich.” She pointed out that these quilts do not have the usual binding on the edges. “These are not bound because the study of Torah is never complete,” she said.

Postponed because of the pandemic, “Seeing Torah” is finally on display at Hebrew College through Dec. 10 as part of the college’s centennial celebration. Taken together, the 54 squares of quilt present a biblical arc that references the personal, political and historical. The first Torah portion, Genesis’s Bereishit, is an explosion of color capturing the energy of creation. Rabinoff-Goldman offers an artistic rendering of the verse “Let there be light” with the Hubble Space Telescope images in mind. “I looked at those images from the Hubble and thought, this is what it looked like when the earth was created,” she said.

At the outset of the project, Rabinoff-Goldman switched from working in cotton to silk. She found that silk was not only more luminous, but the fabric’s sheerness allowed her to layer the colors. Viewed together on the wall at Hebrew College, Rabinoff-Goldman’s quilted pieces serve as both plot points and commentary. For example, the third book of the Torah, Numbers, records Miriam’s death in Hukkat. “It simply says in the Torah, ‘And Miriam died.’ My representation of Miriam is the visual eulogy she does not get in the Torah,” said Rabinoff-Goldman. Miriam wears a colorful tunic of blues and yellows striped with red and green. In the background are representations of events in her life that profoundly impacted Moses and the Israelites.

Two chapters later, the Torah portion is Pinchas. Miriam’s feminist legacy is carried forward through the five daughters of Zelophehad. In the absence of sons, these women are allowed to inherit their father’s land by no less than a decree from God. Rabinoff-Goldman presents a contemporary take on this prescient story by depicting her version of the Women’s March. Additionally, the slogans “We Can Change the World” and “Re-Arrange the World,” are amplified in large black letters.

Rabinoff-Goldman offers another feminist image for the iconic words of Judaism’s central prayer, the Sh’ma, found in Va’etchanan in Deuteronomy. “You shall love the Lord your God with all your heart and with all your soul and with all your might,” begins the prayer. Alongside those words, the artist offers a picture of a pregnant woman walking in the desert, presenting the prayer as a gift to future generations.

For her affecting interpretation of Ekev in Deuteronomy, Rabinoff-Goldman had two verses in mind. One is the famous line commonly known as, “Man does not live by bread alone.” Second, later in the chapter Moses commands the Israelites to circumcise their hearts and not be “stiff-necked.” She explained: “I was conflating these two ideas because to me they both represented ways to access a spiritual life by opening the heart and by accepting that what we have is not necessarily from us, but from God. As for, ‘Man does not live by bread alone but by the mouth of God,’ I understood those words to mean that the mouth of God is like the words of Torah, providing spiritual sustenance.”

Rabinoff-Goldman also brings forward themes of social justice in the Bible, as in the Shoftim chapter in Deuteronomy. She illustrates the words, “Justice, justice shall you pursue,” with a magistrate of the day copying the words to emphasize that, “Thus he will not act haughtily toward his fellows or deviate from the Instruction to the right or to the left, to the end that he and his descendants may reign long in the midst of Israel.”

She offers blunt criticism of the Trump White House with a verse from Metzora in Leviticus: “Something like a plague has appeared on my house.” The end of the chapter discusses leprosy, and Rabinoff-Goldman envisioned a kind of leprosy invading buildings and homes. In her quilt, the White House lurks in the background as an example of an extreme case of leprosy dwelling in an edifice. “You have to take out the bricks and re-plaster,” she said. “And the bricks say xenophobia, disenfranchisement, racism, climate change denial, isolationism, misogyny and so on. The young man in the foreground is re-plastering the White House with democracy.”

Rabinoff takes a pro-migrant stance with a verse from Mishpatim in the book of Exodus: “You shall not oppress a stranger, for you know the feelings of the stranger, having yourselves been strangers in the land of Egypt.” The Statue of Liberty holds her torch aloft and wears a button that strikes out the word “wall.”

The words of the Torah also personally resonate for Rabinoff-Goldman. At the end of Deuteronomy, Moses tells the Israelites he will not cross into the Promised Land with them. She works with verses in Vayelech, which include Moses telling the Israelites, “Moreover, the Lord has said to me, ‘You shall not go across yonder Jordan.’” The accompanying image is that of a young woman and her granddaughter exchanging a piece of art similar to “Seeing Torah.”

“I was turning 60 when my grandson was born,” said Rabinoff-Goldman. “I thought, ‘I won’t live long enough to know the end of his story,’ which is a way to contemporize the story of Moses not crossing over into the Promised Land. It’s an ongoing narrative in our lives.”

In introducing “Seeing Torah,” Hebrew College president Rabbi Sharon Cohen Anisfeld reflected Rabinoff-Goldman’s spiritual journey and determination to continue her Jewish studies. Said Anisfeld: “It is through deep literacy that we give rise to rich intellectual, spiritual and cultural creativity, [and] it is through Jewish education that we give birth to a vibrant Jewish future. What better expression of those values than an art exhibit born of deep and sustained study of the yearly Torah cycle—that is itself a work of visual midrash? Undertaken—incidentally—by someone who had supposedly ‘retired’ but has shown us all what it means to cultivate a lifelong capacity for learning, creativity and renewal.”

Want to learn more? Hebrew College is featuring alumni-led talks about the Torah portion of the week as it pertains to Anita Rabinoff-Goldman’s “Seeing Torah” exhibit beginning Monday, Oct. 4. Find more information here. For information about viewing the exhibit through Dec. 10, 2021, click here.