Missy Mae Sturtevant, MSW, is the director and owner of MaeBright Group, LLC. MaeBright works with state agencies, non-profits and companies looking for support in creating welcoming environments for LGBTQ people through policies, trainings and technical assistance. Contact missy@maebright.com to inquire about how MaeBright can help your agency or organization. Missy is 30 years old and lives in Somerville, where she spends a lot of time dancing in her kitchen instead of cooking in it and spoiling her tripod Siamese rescue cat, Hamlet. 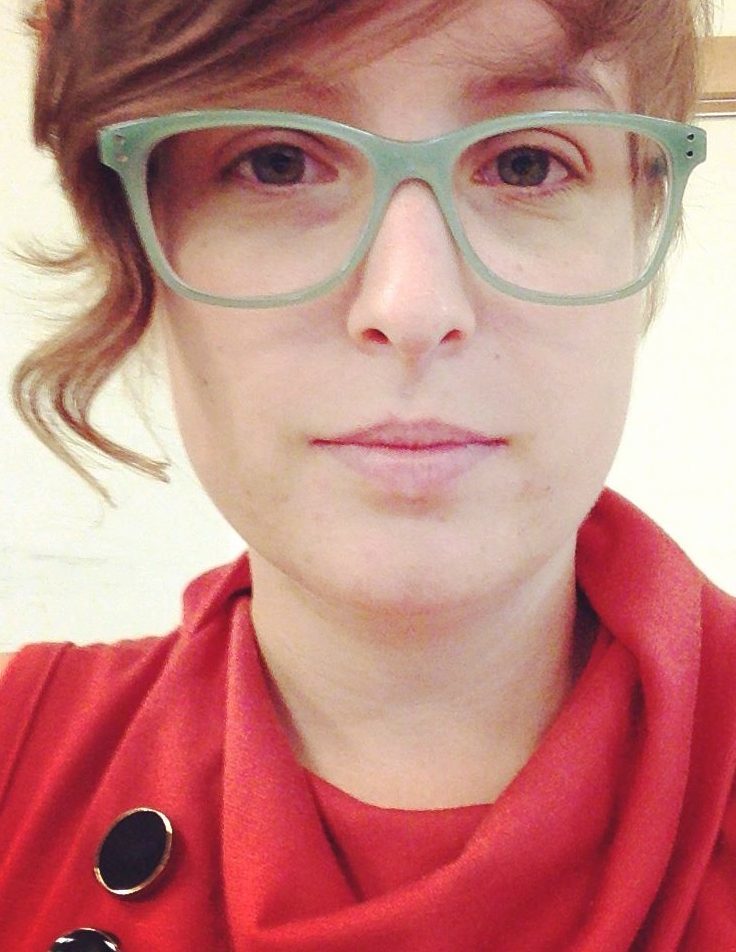 If I were to describe my sexual orientation, the image that comes to mind is a brown cardboard box, flaps open, with green goo oozing over the sides. It feels uncontained, messy and amorphous. That’s how it’s felt ever since I came out at 15.

I’m lucky to have built a career in talking about queer folks. I lead trainings and offer support to agencies, businesses and communities that want to improve their welcome to LGBTQ people through MaeBright Group, LLC, a business I started in August. Recently, a colleague asked me whether I come out to people in my trainings. Use-of-self, as a trainer, is a really valuable tool.  I’ve seen people talk about their own identities while facilitating who do a great job. But I don’t, or rather it feels like I can’t. My identity feels too complicated.

When I was 12, I started plastering my bedroom walls and ceiling with late-‘90s boy band pictures. At 15, I started dating a person who at the time was living as a girl and dressed very masculine (and has since come out as gender non-conforming). This confused a lot of folks, including myself. I tried to find a word that made sense to describe my identity, but none of them felt right. The only thing that did feel right was my new relationship. So I settled on being label-free and focused more on the person I was dating. I didn’t get a lot of support about not using a label, though. My friends encouraged me to “just accept” that I was bisexual—a word that seemed to make sense logically but just didn’t feel right in my body. Eventually I gave in and called myself bisexual, too.

During college I learned a new word that felt better—pansexual. It helped me articulate some things: (a) there are more than two genders, and (b) I have been and can be attracted to more than two genders of people. When I would tell people I identified as pansexual, they usually replied, “What’s that?” Then I got to provide some education. I wanted to have conversations about my identity instead of using a label that already had stereotypes, presumptions and a lot of other conversation-stopping baggage attached to it.

In the past eight years, I’ve settled on “queer”—a label that feels like it has enough wiggle room for me. I’ve also realized this: some people are attracted to body parts, and some people are attracted to gender identities. What I’m attracted to is masculinity—on people with any body parts and any gender identity. I’m all about people who look amazing in a tie. (I’ve had someone jokingly say I’m tiesexual.) My current partner, Max, actually bought a bow-tie for special occasions and date nights. He’s used to the typical necktie for professional settings, but seeing that bow-tie makes me dance a little closer. The labels our culture has built don’t always have words that express everything about ourselves, so sometimes we’ve got to make them up or wiggle around a bit to find labels that feel better to us.

It’s been a journey, with at least five descriptors that I’ve used or had thrust upon me (straight, unlabeled, bisexual, pansexual, queer), and with constant learning about who I am. Talking about this journey is not a tool I can effectively bring out from my facilitator’s toolbox without fearing that it will require a long explanation and an intricate digression. Instead, I find it more useful to talk about how people are complicated sometimes, even though we try to fit them in neat, orderly boxes. Everyone’s got some box that is oozing over. When I do talk about myself, it’s to get people to examine their own stereotypes. We talk about my short (adorable) haircut, the dress or pants I’m wearing, or how I’m not wearing makeup. We talk about how the participants also don’t fit into stereotypes and parts of them feel complicated too. The trainings I facilitate are an opportunity for people to feel their own uniqueness and build for themselves an understanding of identities that is less boxed in.