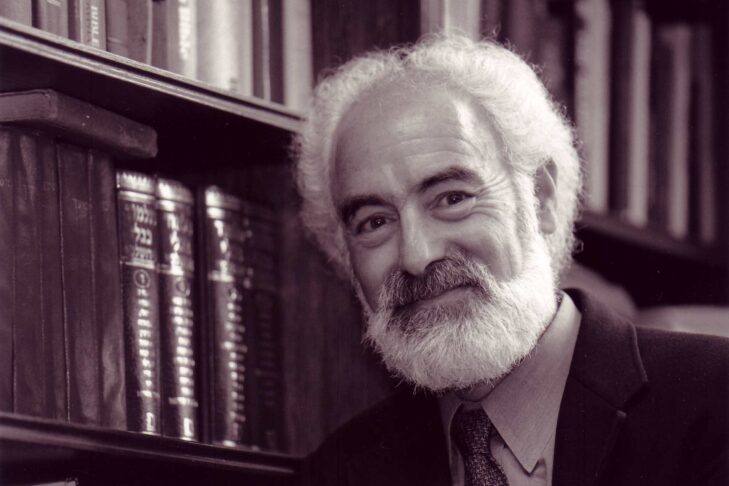 University of Chicago professor Michael (Buzzy) Fishbane, PROZ ’60, BJE ’64, calls himself “one of the old-timers,” a Hebrew College student from an earlier era.

Fishbane attended Hebrew College Prozdor and Hebrew College’s BJ.Ed program in the 1950s, soon after the College had moved from its first home on Crawford Street in Roxbury to an elegant classical beaux arts mansion at 43 Hawes St. in Brookline.

There, he studied in Hebrew with “remarkable faculty members,” many of whom had lived and learned in Europe before World War II—rabbis and scholars, religious and secular, experts in fields ranging from Talmud to Hasidism to modern Hebrew literature. These “singular individuals,” as he calls them, including many others who were Boston natives—all had lasting impact on Fishbane and his contemporaries.

“As young Americans, we suddenly came in contact with intellectual and cultural currents of an earlier era—most notably the spirit of Hebrew humanism and traditions of political and cultural Zionism,” he said. “The faculty brought events to life and spoke of important matters with a personal and cultural intensity.”

Fishbane remembers first-hand reports of Dr. Steiner’s relationship with Jabotinsky, and the impact of the Tachkemoni schools of Poland. He remembers memorizing biblical and rabbinic texts, and especially the poetry of Bialik and Tchernichovski. He also recalls giving a report on “Plato’s Symposium” in Hebrew.

“The goal was to master the sources, traditional and modern, to think deeply, and to live a rich cultural Judaism. The diversity made a deep impression,” he said. “It was formative for me and, I think, for many of my friends.”

For Fishbane and his classmates, the old Hebrew College library was also “a wonder.” Fishbane recalls perusing the shelves, filled with tens of thousands of volumes that represented “the entire range of Jewish experience.” It was, he said, “the kind of library that we had never seen or even imagined.”

Like many of his friends, Fishbane carried what was referred to as “a double load.” After classes ended at Brookline High School, he traveled across town to Hebrew College, where he would take five or six additional courses through the afternoon and late evening. He also spent Sunday mornings at Hebrew College and summers at Camp Yavneh in New Hampshire, where he and his friends continued their Hebrew studies and spoke only in Hebrew. Fishbane sustained this “double load” throughout college, attending both Brandeis University and Hebrew College.

“We were taking 10 to 12 courses, and shared a unique bond,” he said. “It was very intense. It required an enormous amount of dedication. But it was also very exhilarating. Hebrew College was an everyday event, and was a continuous source of intellectual stimulation, alongside my secular studies.”

Like many classmates, Fishbane also taught in local synagogue schools, preparing him for a lifetime of service to the Jewish community. He spent his junior year, 1962-63, in Israel, where he and his classmates were amongst the first overseas students. Many of Fishbane’s teachers at that time were also great luminaries of Jewish scholarship in the 20th century, he said.

“We were exposed both from the early generation to this range of Jewish culture and Jewish scholarship that was kind of a living cultural Zionism,” he said. “There was a shared sense of creativity. Everyone was intelligent and creative in their own way. The experience was extremely rich and penetrating.”

Fishbane went on to earn a Ph.D. in biblical studies from the Brandeis Department of Near Eastern and Judaic Studies, and to become a faculty member at Brandeis for over 20 years. He left Brandeis for the University of Chicago in 1991, where he remains a faculty member today. He has also served as a visiting professor at many universities throughout the world. He received an honorary doctorate degree from Hebrew College in 2009.

Through his writings on the ancient Near East, biblical studies, rabbinics, the history of Jewish interpretation, Jewish mysticism and modern Jewish thought, Fishbane has shaped the understanding of Jewish texts and traditions at the undergraduate and graduate levels. He believes the foundation for all of this came from his experience at Hebrew College, which, he says, has been formative for so many young adults throughout the past century. To help commemorate this legacy, he is one of the editors of the Hebrew College centennial volume, Hiddushim, along with friends and colleagues Arthur Green and Jonathan Sarna.

“Everybody saw the Hebrew College as the crown jewel in Boston. Everybody really felt that this was where Jewish culture was being expressed through courses and study,” he said. “And Hebrew College has always been a special place—one that can draw everybody together from diverse backgrounds. The Hebrew College of today continues that great legacy. It has been my privilege to be associated with it over these many years and to watch the College enter its second century.”