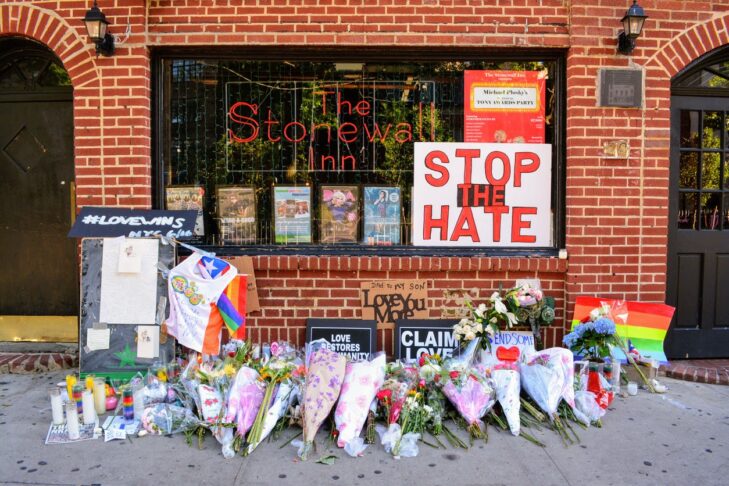 This year’s Pride Month is going to be different. Instead of lavish parades with T-Mobile floats, rainbow Absolut bottles and mounted police gamely telling me to smile, the streets of every single state in the country are filled with protestors.

Community leaders, activists, essential workers and even Mennonites are showing up in droves to fight back against the horrific violence police perpetrate against black people. Breonna Taylor, George Floyd, Tamir Rice, Philando Castile, Eric Garner, plus a million other people whose names are not widely shared, were brutally murdered by police for the crimes of sleeping, playing, driving. For the crime of being black in America. As the summer heat rises, it’s obvious that the American people—along with protesters across the world—will no longer stand for this violence. This year, June casts off capitalist frippery and cuts straight to the heart of what Pride is actually about: fighting police brutality.

In 1969, being gay and trans in public was functionally illegal. Police often raided gay bars frequented by black and Jewish people. Butch lesbians and trans women were subject to humiliating and dehumanizing three-article rules, where they had to be wearing three items of clothing “appropriate” for their perceived gender to prevent arrest. Mass arrests, brutality and assault were common. The Stonewall Inn in Greenwich Village was subject to police raids regularly, but at the end of June 1969, the patrons of the bar fought back. Gay and trans people, most of whom were people of color, homeless or sex workers, surged against the police as a community. These riots and the marches on their anniversary became the foundation of Pride. It is only fitting that we return to our roots now.

Police presence at Pride has always unnerved me. I’ve watched police stand guard over homophobic protesters and protect neo-Nazis, only to see the same police shoot tear gas and rubber bullets into the faces of black people. The divorce between Pride’s origins and what it has become indicate that the purpose of the event has become warped. Pride isn’t a party. It isn’t a moving zoo, a spectacle or billboard on which to buy ad space. It’s a condemnation of the brutality marginalized people have faced at the hands of police. It’s a protest. It’s a riot.

Some are quick to condemn protesters and call for “unity” and “love” instead of real change. Some take their thin mask off in favor of police brutality, citing “blue lives” as opposed to black. But blue lives don’t exist. Policing is a job, just like every other job. At the end of the day, police can take off their uniforms. Black people can’t take off their skin.

The Jewish and black communities have long worked in solidarity with one another. This solidarity does not excuse the privilege that we hold over each other, and unlearning racism is a lifelong pursuit. But the LGBTQ and Jewish communities owe our solidarity to those who are persecuted in ways that we are not. If you can, take to the streets. If you can’t, donate to bail and mutual aid funds. Examine your own prejudices, read about systemic police brutality and call your local government.

This June, the world is fighting back against tyranny and fear. We are pulling back the curtain on cruelty, and we have decided that it will no longer stand. We owe this to those who came before us, and we will not stop fighting for a better, kinder world.