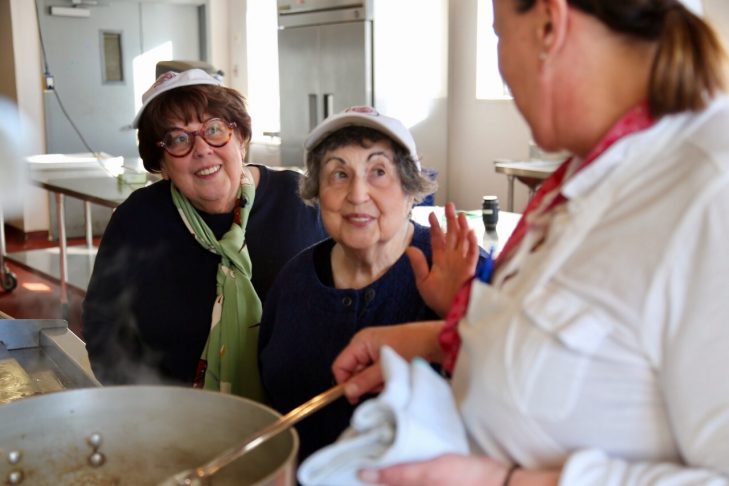 Marilynn and Sheila Brass prepare to make a leaning tower of savory rugelach on an episode of “The Food Flirts” (Photo: Bruce Seidel)

To meet the charming Brass sisters—Marilynn and Sheila—is to fall in love with them instantly. In this latest stage of their lives, the sisters have reinvented themselves as award-winning cookbook authors and irresistible television personalities known as “The Food Flirts.” They exclaim together that between them they are two “roundish” women who have accumulated over 130 years of cooking and home baking experience. At 75 and 80, respectively, Marilynn and Sheila like to say they are an overnight success in the culinary world, and the key to their success is the ability to always “feast on hope.”

That hope has transformed the Brass sisters into culinary stars. With three successful cookbooks behind them—2015’s “Baking with the Brass Sisters: Over 125 Recipes for Classic Cakes, Pies, Cookies, Breads, Desserts, and Savories from America’s Favorite Home Bakers,” 2006’s “Heirloom Baking with the Brass Sisters: More than 100 Years of Recipes Discovered and Collected by the Queens of Comfort Food,” which was named a James Beard Award finalist in the dessert and baking category, and 2008’s “Heirloom Cooking with the Brass Sisters: Recipes You Remember & Love”—and an upcoming series of weekly television episodes aptly called “The Food Flirts” airing on PBS beginning July 6, the sisters have arrived. They received their second James Beard Award nomination this year for “Best TV Show on Location.”

On a recent Wednesday afternoon, Marilynn and Sheila warmly greeted me in their North Cambridge home. “This is a working house,” said Marilynn, pointing out the various culinary antiques that decorate the single-family home they rent. In one display case there are antique food molds that the sisters found in yard sales. “We were certified antique dealers in the 1970s,” they practically said in unison. Antique cash registers are lined against another wall. There’s a sign that announces in neon “Marilynn’s Café,” and protruding from the wall near the kitchen are large letters that spell the word “EAT.”

The Brass sisters’ story begins on the North Shore in the town of Winthrop. They lived in a three-decker house on Seafoam Avenue across the street from their synagogue. Their father, Harry, was the town pharmacist, and their mother, Dorothy—“the most beautiful woman in all of Winthrop”—was a baker and cook extraordinaire. On their website—a rich resource of recipes and anecdotes—the sisters write: “When we could barely reach the kitchen table, we were already turning scraps of dough into miniature braided challahs and jam tarts, lovingly brushed with an egg glaze to make them shiny.”

Sheila described their mother as the “Cake Boss of Winthrop” and the appellation brought forward a sweet memory of her making an elaborate cake that Marilynn related with commentary from Sheila. “My mother wanted to participate in our temple’s fundraiser, and she decided to make a replica of the shul in cake form,” she said. “She made sheet cakes and built up [her design] from there. She made maple frosting to duplicate the tiles of the shul, and the windows were arched with chocolate icing. It took her three weeks to make this cake. When it was finally finished, she realized she had to get the cake down a flight of stairs from a triple-decker across the street.” At this point, Sheila interjected: “How many Jewish men does it take to carry a cake across the street? It takes four strong ones!”

The sisters are trailblazers. They never married and supported themselves in a variety of professional jobs. Marilynn directed communications for a laboratory at MIT and Sheila was a dress designer in New York and Boston for over a decade. They also both worked at WGBH. In their spare time, their antique collecting hobby turned into an avocation. Many of their collectibles, along with dinnerware from their mother and an art deco bench in the kitchen, are used as props in their books and on their television show. 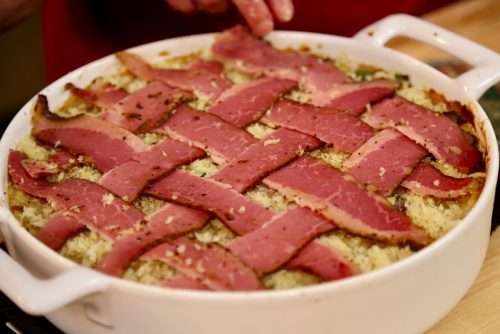 Pastrami ramen noodle kugel from an episode of “The Food Flirts,” made with pastrami from Mamaleh’s and homemade ramen noodles, with a latticework top (Photo: Bruce Seidel)

In addition to their impressive 5,000-piece collection of culinary memorabilia, the sisters have garnered an astonishing 6,500 cookbooks. Their mother’s cherished cookbook, a fragile keepsake of original recipes and family lore, is in a safe deposit box. The sisters led me into a room in their house where most of the cookbooks are stored. There didn’t appear to be a particular filing system, but nothing felt out of place either. The collection goes back as far as the 1600s and are in languages ranging from French to Swedish. It is further notable for the number of manuscript cookbooks the sisters have either found or been gifted.

“We’re stewards of these manuscripts,” said Marilynn. “Some go back three generations, and we know that because the handwriting changes. One of them had knitting patterns, another prayers. One even combined recipes with a diary. Recipes for things like ‘war cake’ and ‘economy pudding’ reflected the times.”

This season of “Food Flirts” features the sisters on a road trip to Provincetown in which they try South African food with daunting names like “monkey ribs with monkey gland sauce.” There’s a story behind those names, and Marilynn is quick to tell it. “After the Boer War, the English were in South Africa and they wanted to eat something special,” she said. “So, the South African cooks said their pork ribs with barbecue sauce were monkey ribs and monkey gland sauce! The food was incredible.”

The sisters stick with their tried-and-true format of joining different cultures through their food adaptations. For this recent set of episodes they have combined the national desert of South Africa, a frozen milk tart, with a Greek baklava that contains cinnamon and walnuts. In another episode, the sisters roll ice cream. Marilynn was a natural, but Sheila was not quite as adept on her first try. “I couldn’t let Marilynn get away with doing it perfectly, so I had to do it again!” she said. In that episode the sisters also mix Asian and Latin cuisines to make a tres leches cake. “We layered mango, green tea and bourbon-banana ice creams in a metal bowl, and we used Thai iced tea whipped cream in the frosting,” Marilynn said. “It was fabulous,” Sheila interjected. “We had a little party afterwards where we had salsa lessons right in our kitchen.”

Always seeking new adventures, the sisters are keen to try soul food and “want to do something with barbecue sauces. There are so many different types. Some are sweet, some are vinegary. It’s a real art form and we want to learn more,” said Marilynn.

The blending of cultures is not only the sisters’ stock-in-trade, it works a special magic on all the foods they lovingly prepare. “The concept of ‘Food Flirts,’” noted Marilynn, “is not just what you put on the table, but what you bring to the table.” Added Sheila, “It’s food without borders.”

The sisters are intent on sharing the multi-ethnic cuisines and cultures of America. “That’s what we should be doing,” said Marilynn. “We shouldn’t be divisive. We should be celebrating who we are. Unless you are Native American, you had to come from somewhere. We honor everybody, and we have fun doing it.”