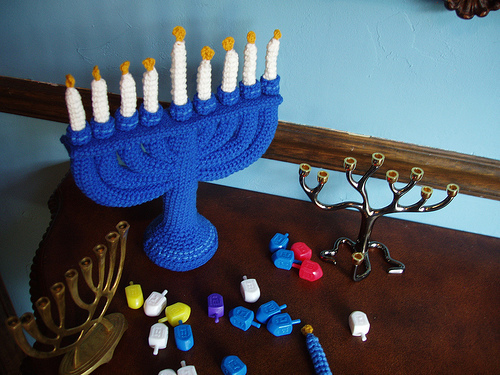 Chanukah. Hanukkah. Chanuka. So nice, I spelled it thrice. What’s not to like about the Festival of Lights? A time to sing….to play….to clog your arteries with cooking oil. LET’S PARTY! This time of year you may find yourself having to explain to your friends, co-workers, Wal*Mart greeters, and vagrants at the bus stop what exactly this holiday is about. And you may not know yourself. Fear not – I’ve got for you a cheat sheet. Whether you like your latkes with apple sauce or sour cream, there’s much to celebrate for eight days this December, so gather round, children, and let’s learn about the upcoming Jewish holiday.

What’s this celebration all about? In 168 BCE, the Syrian-Greek army gained control of the Jewish Temple. In 167 BCE, their king, Antiochus, declared that followers of Judaism would be killed. And in 166 BCE, Jewish rebels known as the Maccabees decided that two thousand years later, their descendants might need a reason to make dorky Youtube videos.

Regaining control of their land, the Maccabees returned to the Temple to discover that they only had enough oil to light the Temple’s ritual menorah (candelabrum) for one day. To their surprise, it lasted eight. And to this very day, we commemorate this miracle of the oil lasting eight days by eating an inhuman amount of fried foods. The most popular oil-coated delicacies are jelly doughnuts (sufganiyot, primarily in Israel) and deep-fried potato pancakes (latkes), which taste like pancakes in much the same way that cotton candy tastes like liquid mercury.

This little history and culinary lesson should clarify that despite the holiday’s close proximity to Christmas, the festivals really have nothing in common. Although Christmas is celebrated on the 25th of December and Chanukah begins on the 25th of the Jewish month of Kislev, rather than waiting for a fat man to visit, we Jews try to put on as much weight as humanly possible. Furthermore, while many Jews in the United States give gifts on these eight days, it is understood that this custom has developed simply so that Jewish children will not feel left out during Christmastime. (The Jewish holiday with a longer association with gift-giving is actually Purim, which usually falls in March and may explain why halfway through the month, left-out Irish-Catholics are so eager to give each other the gift of green beer.)

To mark these eight festive days, Jews light a special menorah known as a chanukiyah which begs the question “what the heck is a non-special menorah?” The first night, we light one candle, the second night two, and so on. Each candle is lit from a separate candle called the shamash whose job is illumination, as using the ritual candles for light is forbidden. The shamash sits apart or above the others, which can occasionally lead to issues of jealousy, petty name calling, and online candle bullying.

Now that we’ve lit the candles and sung joyful songs, let’s have some fun. It is tradition for young children to play with a dreidel, a four-sided top with letters on each side, each one corresponding to an amount of goodies the spinner will win or lose, based on how the dreidel lands. The main lessons to take from this are, one, that Chanukah is a happy occasion, and two, that gambling should begin at a young age.

FYI: While many Diaspora Jews have a strong connection to Chanukah, it is not considered a major religious holiday in Judaism. Unlike on the Sabbath, celebrants are not commanded to rest, which is ironic considering that the large number of doughnuts might induce a food coma.

However you plan to celebrate, spin that dreidel loud and spin it proud. Chag Chanukah sameach! Happy Chanukah!

This article is part of JewishBoston.com’s Brief Guide To Christmas For The Perplexed! Download the entire guide or find the other articles in our blog section.