When you think of Judaism, you might not think about angels; you might even dismiss them as one of those things that Jews don’t believe it.  But given what we see in this week’s parasha, and later Jewish thought and prayer, that is far from the case.

One of the essential movies of my childhood was Raiders of the Lost Ark.  It is a timeless classic, one of those movies that I watch whenever it’s on- no doubt most of you have seen it.  As a kid, the fact that a major Hollywood movie was made about a Jewish artifact was stunning and exciting for me, despite Belloq’s bogus Hebrew prayer over the Ark at the end of the film before he and his Nazi pals meet their timely demise.

Take a look at the Ark in the movie, or in any other depiction and you’ll notice the kruvim (or, in English, the cherubim)- the golden, winged angels facing each other. 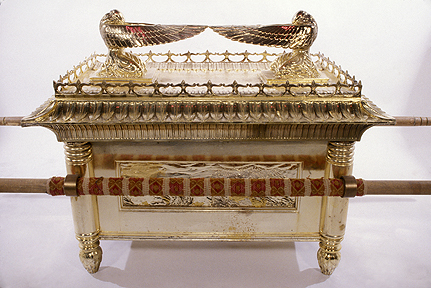 In the middle of this week’s Parashat Terumah, Moses receives the following instruction from God about building the Ark.

What are kruvim/cherubim?  In today’s world the word cherub evokes an image of a chubby, winged baby-ish figure with rosy cheeks, flying around and being adorable.  A few thousand years ago, however, the development of kruvim in Judaism has a much more interesting story.

Scholars tend to think that the idea of kruvim has its roots in ancient Near Eastern mythology.  The pre-Israelite existence of deities like the shedu and lamassu (male and female versions of a part bull, part eagle, part human) and the Hittite usage of griffins point to a proliferation in the region of mythologies revolving around protective man/beast/angelic creatures.

The linguistic connections between these pre-Judaic figures and kruvim are strong- note the Assyrian words karabu/kuribu and the Akkadian word kuribu, both of which were used to describe these protective angelic beings, whose likenesses were designed to be placed on the entryways to homes.  (Mezuzot, anyone?)

In the Jewish tradition, kruvim pop up all over the place, from the description of the ark, to Ezekiel’s vision of the merkava, to the Books of Samuel and Psalms.  God in fact places kruvim at the entrance of the Garden of Eden to guard against re-entry.  The description of these winged angelic beings with special powers is laid out in the Tanakh and then incorporated into later Rabbinic and Kabbalistic tradition.  Maimonides himself, inhis work Yad Ha-Chazakah, placed the kruvim as #5 on his list of the ten ranks of angels.

And even in our liturgy today, there are echoes of these angels.  At the conclusion of the El Adon prayer on Shabbat morning, we have the following words: “Tiferet ugdulah, seraphim v’ofanim v’chayot hakodesh.”  Loosely translated, this means “all the celestial beings attribute glory and grandeur”, but a more exact translation would actually name the celestial beings, the seraphim, ofanim, and chayyot hakodesh, three other powerful and distinct angels in the Jewish tradition.

While some modern scholars, and certain denominations of Judaism, reject the literal interpretation that supports the existence of angels, there is no denying that the kruvim and other celestial beings are all over our literature, whether  Biblical, Rabbinic, Midrashic, Kabbalistic, or even modern.  This is the tip of a very large iceberg; I certainly encourage you to look into this topic and reach your own conclusions.