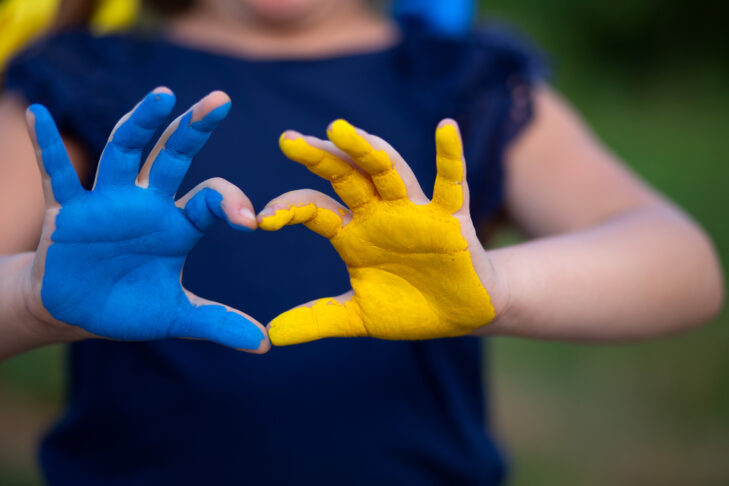 Helen and Skip Davis were the last people to get on the last flight out of Ukraine before Russia attacked. Just a day earlier, a family friend in a Ukrainian intelligence agency informed Skip that this situation was different. Russia had mobilized troops right next to the Eastern Ukrainian border. Skip’s friend gave him an ominous warning, one that he would be forever grateful for: “They’re coming, Skip. I would have left yesterday.”

Skip and his family lived in Odesa, Ukraine, for more than a decade, and Helen, Skip’s wife, lived in Ukraine for her entire life. The couple had been assessing the heightening tensions between Russia and Ukraine for weeks, hoping that the conflict would not escalate further than military intimidation. Nobody in Ukraine wanted to believe that Russia would actually invade. Having only 31 years of independence from the Soviet Union under its belt, many Ukrainians were convinced that the two nations’ close history would prevent civilian attacks. According to Skip, everyone assumed that “Russians weren’t going to kill other Russians.”

Deciding it was better to be safe than sorry and to cause the least amount of panic in their community, Skip and Helen booked what they thought would be a 10-day trip to Istanbul until tensions between Ukraine and Russia deescalated. Gathering just the basic necessities, Skip, Helen and their two children packed one small bag each and drove to the airport, making it just in time to leave. Skip remembers thinking to himself: “Geez, I hope the Russian navy doesn’t use us for target practice,” when boarding his plane. An offhand comment meant to amuse Skip’s audience shows just how terrified the family truly was.

Unfortunately, it wasn’t long until Skip and the rest of Ukraine’s fears came true. On Feb. 24, Russian troops were mobilized into Ukrainian territory. Skip and his family were in the air when they received the news: “Helen and I received a text message that a state of emergency had been declared in Ukraine and that Russians were going to invade. They were going to attack. All airports were closed and all future flights were canceled. Within minutes of receiving that message, we had taken off.” Had Skip, Helen and their children been any later than they already were to their flight out of the country, they might not have been able to flee Ukraine.

Just days later the same woman who advised Skip and his family to flee Ukraine, along with her three young children, were victims of a Russian airstrike. While no one received fatal injuries, the three children were immensely traumatized and had to be evacuated out of Odesa to a Romanian hospital.

Skip and Helen continue to think of and help their family and friends who weren’t able to leave Ukraine. Many Ukrainian civilians, small villages especially, are struggling to provide basic necessities; food, water, hygiene products, medicine and first aid are especially scarce.

Conditions for people with medical issues are even worse. Hospitals in Ukraine are being bombed, so some are refusing to seek first aid or medical assistance. Skip laid it all out: “You know how it is for people in America with COVID. All of the beds are being taken. Well, that’s how it is in Ukraine. Only all of the beds are being taken by soldiers.” While many people think of victims of war as those who die in combat or from attacks, many fail to remember those who slowly lose access to vital resources.

It’s Ukrainian women and girls, however, who are taking the brunt of the war’s impact. Helen, who is in frequent contact with people from all over Ukraine, hears first-hand accounts of what happens to victims of war: “The intelligence agencies are intercepting messages that Russian soldiers are sending back to their families and friends. They brag about the fact that they rape and assault women and girls. They brag about looting villages and homes.” This is not abnormal, however.

The Russian and Ukrainian conflict has gone back almost a decade. Most Ukrainians will tell you that the real war started in 2014. As Skip remembers it: “The Russians had agents all over Ukraine. They were starting to plant the seeds of separatism in many cities, including Odesa.” Skip and Helen remember first seeing Russian supporters right outside of their own apartment.

Protesters were singing anthems and leading demonstrations that included the Russian flag. Paid pro-Russia protesters marched around the Odesa downtown area and got into a physical altercation with a pro-Ukrainian independence group.

Helen went on to admit that this entire ordeal has been draining on her. Having to hear the worried voices of her family and friends every day gets tiring: “It’s such a nice area here. We live right next to this beautiful park. But you can’t enjoy it. Because you wake up in the morning and think: How can I help my people? What else can you do? It gets emotionally exhausting.” Even though Helen and her family are safe, they still carry the burdens of the ongoing conflict, something many people don’t realize is a consequence of war.

One thing continues to remain clear, though. Ukrainians are tough. As Skip put it, “Ukraine loves freedom. They do not want to go back to an iron curtain.” Ukrainians will continue to fight for freedom and democracy—Putin won’t take that away from them.

Skip went on to specify how Americans could help Ukrainians, and while he was prepared with a plethora of answers, one in particular stood out: “The biggest way you can help has to do with misinformation. The propaganda in Russia and Ukraine is horrible. Russian propaganda is infecting the United States to the point where people genuinely don’t know if the Ukrainian-Russian conflict is happening. The absolute best thing you can do is denounce misinformation. You gotta tell people the truth. This is a real war. It is genocide of Ukrainian people.”

Skip’s message was clear: Americans need to use their privilege and do everything in their power to spread the truth. Through social media, conversations with friends and family or even just self-education, every American needs to do their part in ending this war. Skip wants everyone to know his story, and to know that while he and his family were able to flee Ukraine, many were not that lucky (including his family members).

Helen wants everyone to have a little bit of empathy and kindness. She remembers not the objects she was forced to leave behind, but the memories and the feelings she will never get back. Through all that, Helen remains full of warmth and is clearly a gentle soul: “I wasn’t angry at anyone. I’m not an angry person, of course, and so I try to understand why things happen, and why people don’t get involved. You realize how helpless the people who stayed in Ukraine are and you understand the consequences of the United States getting involved. How could you be mad at anyone?”

If everyone shared just a fraction of Helen’s kindness and Skip’s determination, the two are sure that Americans could make a huge difference in the lives of Ukrainian civilians. Many organizations, such as Students For Ukrainian Refugees and Jookender, are hosting collection drives and fundraisers to take some of the weight off the most affected people of war. Do what you can to help Ukrainian refugees and consider donating to Students For Ukrainian Refugees. Check out our donation page or fundraiser for more information on ways you can make an impact.

Passionate about social justice and activism, Mackenzie Holian, a junior at Pingree School, decided she could no longer sit back and idly watch the Ukrainian refugee crisis. Mackenzie leads her local school community through clubs and organizations such as Model United Nations, Gender-Sexuality Alliance, Write to Your Representative and Equity and Inclusion committee. It only seemed natural that when put in touch with two local Ukrainian refugees, she used her platforms to spread awareness and encourage others to help those in need.

All Jookender programs are supported by The Jewish Federations of North America, with generous funding from the Genesis Philanthropy Group and powered by CJP Teen and Young Adult Community Impact Grants.