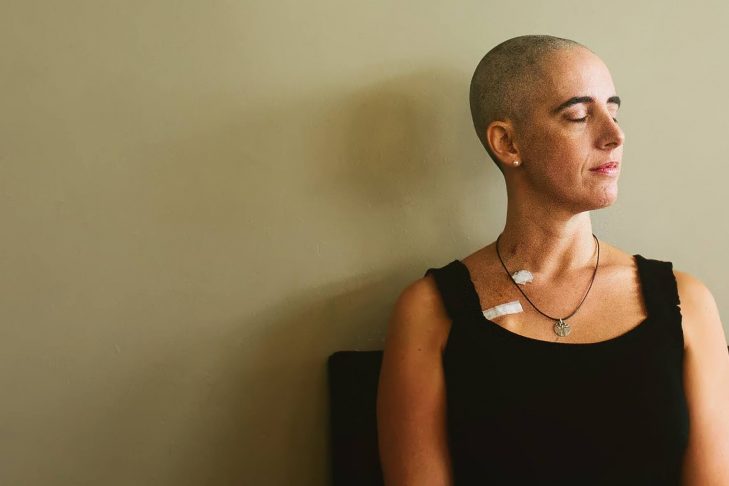 Lauren Corduck shortly after being diagnosed with ovarian cancer that developed because she inherited a mutation in her BRCA1 gene. Lauren preemptively had her head shaved prior to her hair falling out due to chemotherapy treatment. (Photo: Cara Soulia)

This week, I was gutted by the death of a stranger. I never met her, but I felt as though I knew her.

I had followed Lauren Corduck’s work since reading about her right here on JewishBoston. She founded the nonprofit advocacy group Oneinforty to raise BRCA awareness among Ashkenazi Jews, who are at high risk for the gene mutation. BRCA increases the chance of being diagnosed with breast, ovarian and prostate cancer. We have a one in 40 chance of developing these cancers, and early screening for mutations such as BRCA is preventive.

Lauren learned this the hard way: In January 2017, she was diagnosed with late-stage ovarian cancer after experiencing back pain. She was dedicated to ensuring that other Ashkenazi Jews did all they could to avoid the same fate.

When pregnant with my second son in 2016, I underwent genetic testing as part of the Jewish panel, which screens for Tay-Sachs and other hereditary diseases. I was told it was a precautionary measure, mainly because I was over 35 (I sailed through my first pregnancy blissfully unaware of such things).

For all my worrying, I didn’t fret about the panel. My dad is Jewish; my mom isn’t. My dad is perfectly healthy. People in his family die of heart disease, generally, not cancer. But then I got a call from a clueless nurse at my OB-GYN’s office, telling me I had tested positive for a jumble of letters that she had trouble pronouncing.

I finally was put in touch with a higher-risk OB-GYN and a genetic counselor at Dana-Farber Cancer Institute, who explained that I had tested positive for FANCC, the gene for Fanconi anemia, which causes young kids to develop bone marrow failure, cancer and a host of other illnesses. It’s common for Ashkenazi Jews to carry the mutation; the chance that my husband had it—he’s not Jewish—was unlikely. We each needed to have the mutation in order to pass it along, and he was quickly tested and cleared.

That was the good part. The scarier part was that, if I had this mutation, what else could I have? FANCC is in the BRCA family—it’s a different gene, but who’s to say I didn’t have both? In fact, FANCC was initially thought to increase breast-cancer risk, something that has since been preliminarily dispelled. And yet: I worried. What other secrets were harbored in my DNA?

Truthfully, I didn’t want to know. I admired Lauren’s bravery and educational advocacy from afar. I admired her honesty. It also terrified me. It was easier to pretend that it could happen to someone else. Easier to say, “Oh, how sad. Oh, how awful. Oh, what a relief that it isn’t me.” So I didn’t get tested. My life was going so well. Why ruin it?

“It’s like I can hear the cancer forming in other people’s bodies as we speak,” she told The Boston Globe in 2017. “We need help raising awareness.”

So, for years, I put off getting tested for BRCA. I had dealt with health anxiety, sometimes crippling, for years. Why add fuel to the fire? What if I came back positive? Then what? At least, if I didn’t know, I could cling to a glimmer of hope that I was fine. I could pretend that the odds didn’t apply to me. Of course, had I been tested and found negative, I could stop worrying about it once and for all. But the waiting period was just too frightening, even if it could bring me long-term relief. Because it could also bring me certain doom.

I also avoided getting mammograms. I rescheduled and rescheduled again. First, I blamed a tough year of ongoing kidney stones and subsequent infections—even my doctor, aware of my ongoing health anxiety, advised me to wait a few months until I felt mentally stronger. Then COVID-19 happened, and I felt completely justified in avoiding non-urgent medical appointments.

But then I saw Lauren’s obituary. I was aimlessly scrolling on my phone, loafing on my couch, picking at holiday leftovers. My throat tightened. My stomach clenched. I felt sick: nervous sick, anxiety sick, somebody died sick. This was real, and it was awful.

Because, reading about Lauren’s life, I realized something. My life is going so well. Why ruin it?