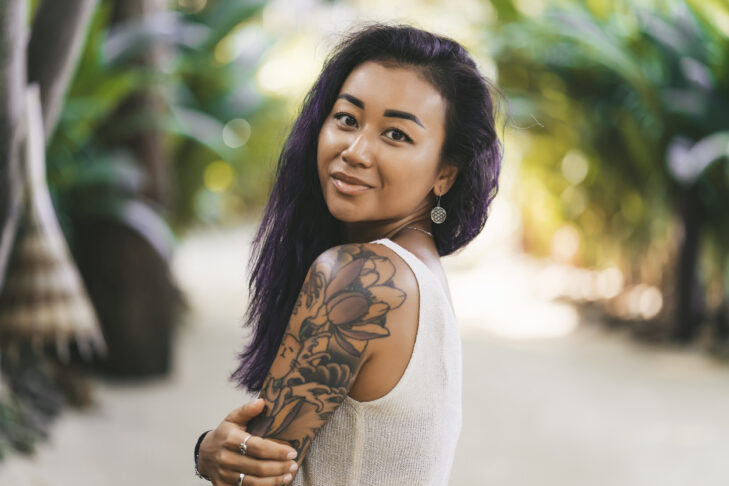 As cultural views on tattooing shift into a more nuanced approach, more Jewish people are choosing to decorate their bodies with permanent art. For some, tattoos honor the passing of a loved one, indicate something about themselves and their interests or reclaim the recipient’s body after trauma or surgery. This new generation has embraced tattoos to a certain extent, but this cultural change is not without its pitfalls.

Tess S. recounts their father’s trepidation when, at 18, they wanted a tattoo signifying the birth and death dates of their mother: “When I told my father I wanted to include the dates of her birth and death, he got nervous in a way I hadn’t seen before. Numbers? On my arm? I assured him they’d be on the inside of the upper part of my arm, close to my heart, and that they’d be going horizontally across, not lengthwise down. He relaxed a little bit. I hadn’t considered how it would sound, a Jewish person asking to be inked on their arm with a string of numbers.” Tess’s father also balked at the suggestion that he might want a tattoo to signify the loss, stating that “he didn’t want to run the risk of not being buried next to her. Besides, he’d have a hard time coming up with a design he’d want forever.”

The myth that a tattooed person cannot be buried in a Jewish cemetery is a pervasive one, though Tess finds it “incongruous with my understanding of Jewish ethos.” Tess writes: “Living your life such that you’re constantly preparing for what will happen to you after you die feels like an incredibly Christian concept to me—in Christianity, every action contributes toward whether you’ll inevitably spend your afterlife in paradise or in punishment. But in my understanding of Judaism, life is for the living. We work to repair the world now, not so that we can be rewarded for it in death, but because it makes life better for people now. Why, then, should we conduct ourselves out of fear of retribution post-mortem?”

Alma R. takes a similar approach, stating that while “some cemeteries will be stricter about it, in my experience it’s not actually as widespread in practice as most people seem to think.” A Reform Sephardic Jew with 14 tattoos, they understand “why some Jewish people feel uncomfortable with getting tattooed” but ultimately believe that tattoos and Judaism are not always incompatible. “I think ultimately it boils down to ‘two Jews, three opinions,’” Alma says. “As long as a tattoo isn’t hateful, I don’t think having one or more makes anybody a bad Jew.”

The LGBTQ community is well known for embracing counterculture aesthetics, in part to buck social norms and in part to identify each other, so it’s understandable that LGBTQ Jews take a more generous stance on tattooing. However, the Jewish community as a whole can push back on these choices, as evidenced in both Alma and Britt K.’s experiences.

Britt writes: “I have received pushback from my parents and grandmother about my tattoos, and it’s likely that some of that is linked to their involvement in Conservative Judaism, but I believe that most of it is linked to conservatism in general. I come from two very modest Jewish families from just outside Philadelphia. They have been embedded with certain values of what is ‘presentable’ or ‘respectable,’ so my tattoos are just one part of me—along with my queerness, my style, my piercings—that they choose not to understand.”

Alternatively, Tess has received no pushback at all, writing: “I’m lucky to be part of an incredibly progressive Reconstructionist congregation in a progressive town in a progressive area of the U.S. My community, both de facto and by design, doesn’t particularly care about whether or not a person has tattoos. We study the Talmud, and we discuss the rules and regulations, which often get touted as being outdated and out-of-touch, but a significant component of our practice is the adaptation of old laws to modern life.”

During these conversations, I was pleased to learn that both Alma and Britt have tattoos of plants far removed from the traditional roses or bundles of herbs. Alma’s outer forearm sports a “bouquet of flowers that all happen to be poisonous” as a symbol of the idea that “you have to be beautiful and gentle, but still defend yourself.”

Britt’s largest tattoo was “done by a friend while she was an apprentice, and it’s a sort of surrealist arrangement of carnivorous plants that forms a face with the leaves and vines. I’ve always felt connected to Venus flytraps and pitcher plants because they seem to contradict what we all know about plant life—that they’re motionless, passive, the prey of others—and that power feels special to me. I grew up very timid and sweet, going out of my way to please others, and I always felt something like a carnivorous plant inside of me, like there was passion, direction and confidence that others didn’t expect from me or hoped not to see.”

Though Alma, Tess and Britt represent a very small sample of LGBTQ Jews, I was struck by how closely their experiences and thoughts mirrored mine, and how their responses indicated a broader shift in the Jewish opinion of tattooing. Of decorating one’s body, Britt writes: “I believe in Judaism that I can come as I am and that we should celebrate our bodies; I celebrate mine with tattoos. They are a way of expressing myself so that others get a glimpse of who I am before they might even speak to me. I want to have my grandmothers’ Hebrew names tattooed on my arm next, so my tattoos and my religion are directly related to one another.”

This use of tattooing as honoring oneself acts as self-care and self-love, practices vital for LGBTQ Jews, and it seems the culture of shame surrounding tattooing within parts of the Jewish community may be headed in a more nuanced, compassionate direction.