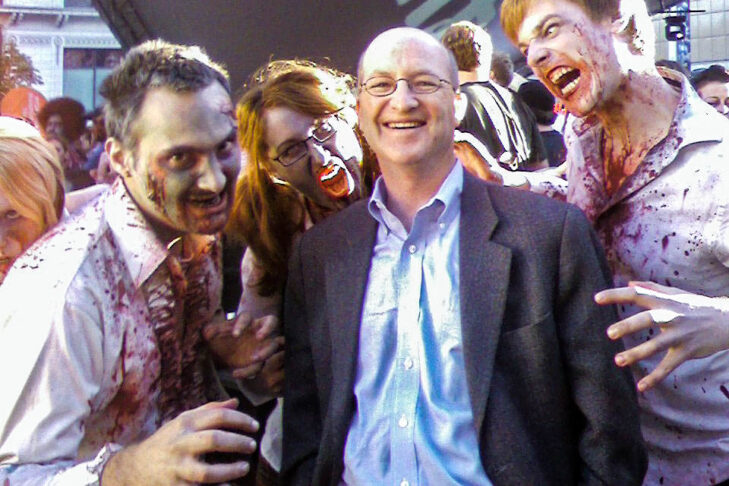 “Judaism does have quite a folklore, mostly from Jewish mysticism, that posits Jewish spirits and even demons,” says Dr. Steve Schlozman, an assistant professor of psychiatry at Harvard Medical School and a psychiatrist at Massachusetts General Hospital. “The problem with tying it to Halloween is the less-than-savory history regarding Halloween and Jewish people, especially during the late Middle Ages and into the renaissance. During this time, Jewish folks were often more ruthlessly persecuted then on other days.”

We spoke with Schlozman, the Belmont-based author of “The Zombie Autopsies: Secret Notebooks from the Apocalypse,” about Halloween, zombies, horror films and the impact the pandemic is having on children this season.

How did your family celebrate Halloween when you were growing up?

My family of origin was about as traditional as you could find in the late ‘70s and ‘80s. We were pretty observant Jews, and I attended Hebrew school until my bar mitzvah. My parents never tried to stop me from trick-or-treating. They understood what I had been taught in Hebrew school—the antisemitic history that had in the past characterized the observance of All Hallows Eve—but they also understood that everybody in my neighborhood in Kansas City, Kansas, was trick-or-treating and there was not an ounce of antisemitism in the practice. To that end, they wanted me to feel like I could be part of the gang, and Halloween was always fun.

As a guy who loved scary movies, and even recalls with nostalgic giddiness the horror movie book that my grandmother, Bobby, gave me one year for Hanukkah, I never quite worked through my issues with Halloween, but I found myself trick-or-treating, nonetheless. Therefore, it seems to me that the bigger demons on Halloween, at least for my generation of conservatively raised Jews, are the demons of guilt that are sometimes associated with assimilation.

How did your upbringing coincide with your passion for horror?

I have very clear memories of my father describing for me over and over how frightening Bela Lugosi is in the original “Dracula” movie. My dad would even imitate Lugosi’s accent and ask me if I could hear the wolves in the distance. Horror films were on Sunday morning on the UHF station from 10 to noon, and although I was normally a kid who got outdoors as soon as the weather would allow it, I often found myself glued to the set watching those original horror features.

Demons have a place in Jewish folklore, as well as the Talmud and Midrash. Where did you learn about these demons?

I learned a tiny bit about the spirit world of Jewish mysticism in Hebrew school, and then later in a Jewish studies course I took in college. However, I was given a crash course on the subject by the gentleman who collects interesting items for Truman State University in northern Missouri. I was visiting the campus one summer to teach about neurobiology using the conceit of zombies. It was a special program for local kids who were interested in science. The man who ran what was I think the library for the osteopathic medical school told me that he had learned of a dybbuk through his acquisition of an item that had once belonged to a professor at Truman State. It was this story that inspired Sam Raimi to produce a movie called “The Possession.” This led me to read more about this usually not-talked-about part of Jewish folklore. Additionally, I often turn to the opening scene in the Coen brothers’ movie “A Serious Man.” It’s a marvelous short film before the feature begins that displays a deceased man who returns to have a conversation with his family in a Jewish village in the old country. It is both heartbreaking and frightening, as well as funny.

The pandemic can be likened to its own horror film. Do you see any parallels here?

Heck yes—and a lot more than I’d like to. There are the obvious issues—a monster out of nowhere that robs us of our freedom, as well as our lives, for example. But perhaps more subtle is the way we personify the virus; we attach political ideologies and even specific pre-existing biases. We forget in its presence how much we have in common and we focus instead on dichotomizing ourselves. There isn’t a horror movie out there where humans do not themselves become the most impressive threat. 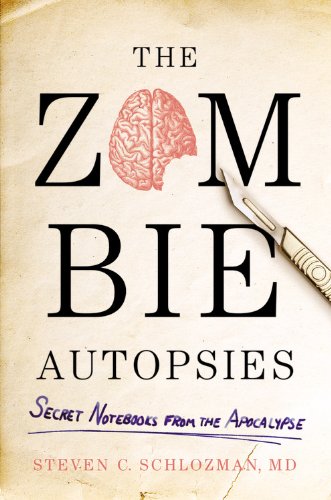 With Halloween just around the corner and the pandemic still with us, what advice would you give to parents?

Halloween is going to be tough this year. Part of the fun is the sense of community one sees as younger children in the neighborhood run from house to house and older children transition to hanging out with each other, or even staying home to hand out the candy. This year, above all, folks need to remember that times are different because of the pandemic. I know we have a tendency to say, “Just this once we can break some rules,” but it doesn’t seem to me to be worth the risk. I would be straightforward with kids; stress that this is an exception to what one usually does on Halloween. Consider putting bags of candy separate from one another on the porch for those kids who do come out, and come up with a good family scary film that everyone can tolerate. Make some popcorn, huddle together and enjoy a Halloween at home as best you can.

There are, in fact, some seasonal activities that are being kept relatively safe. Outdoor events like corn mazes, as long as folks wear masks and keep their distance, ought to be safe enough. Having said that, I want to encourage people to make their own judgments about what their sense of appropriate risk is, and not to be worried about turning around if things don’t feel as carefully planned as they should be.

You teach film classes at Harvard focusing on the horror genre. Tell us about that.

I teach an undergraduate seminar that focuses on the psychological, cultural and neurobiological aspects of horror films and stories. It feels like cheating to teach this stuff, like a return to my days as an English teacher, but even more in line with my interests. I also teach the introductory course in psychiatry for a smaller medical school within Harvard Medical School called the Health, Science and Technology Program. This is a joint endeavor with MIT that admits only 30 students a year. Most are MD/Ph.D. candidates, and most combine their interests in clinical medicine with careers in some kind of research. Both groups of students keep me honest. I am never as aware of how little I know as when I teach, and I find that feeling genuinely invigorating.

Would you call yourself a zombie specialist?

To the extent that zombies aren’t real, then absolutely! I know a ton about the genre, but also, I can kind of make up the science as long as I don’t stray too far from either the fictional or the scientific canon.

Do you have any favorite horror books you would recommend?

I really like reading horror to learn about horror. Mary Shelley’s “Frankenstein” is a must—it teaches the necessity of sympathy for the monster as a means toward understanding one’s own response when things don’t make sense. I love “Something Wicked This Way Comes” by Ray Bradbury. Who doesn’t enjoy a lyrical love song to the strained relationship between a father and a soon-to-be adolescent son? For non-fiction, “In Cold Blood” still gives me chills even to think about.

I can’t possibly choose a favorite! Lately, I’m very fond of a more recent film called “It Follows” and another one called “The Babadook.” These felt like perfect metaphors for some of the issues we face today. Having said that, I enjoyed the heavy-handed political satire of the “Purge” movies, and I have rediscovered many of the films that Larry Fessenden produced and wrote. His movies always feel fresh to me, filled with sometimes subtle and sometimes not-so-subtle social commentary, and they never pull their punches. Finally, I always like to mention the movie “Martin.” This was one of George Romero’s early films, and it’s a sort of vampire film but really works best as a strategy. I think that it’s maybe the most under-watched wonderful horror film in the horror canon.

Your writing combined with your medical knowledge are perfect for turning a zombie into something people can understand. How did your first novel, “The Zombie Autopsies,” come about?

I had been kicking around the idea of making sense of the modern zombie trope through the lens of neuroscience. However, it was the scary year when my wife was undergoing chemotherapy that provoked me to put it down on paper. Because “Night of the Living Dead” is nearly always on TV, I remember the evening when I tucked my kids into bed, got my wife to sleep after she had received her first or second treatment for breast cancer and then settled in to watch this old favorite. It occurred to me that I wasn’t going to sleep that night anyhow because of my concerns for my family, so I decided to write a fake medical paper. I thought I needed to leave my wife’s illness to the oncologist, and I would have a go at the zombies. My wife’s cancer responded wonderfully to her treatment, and she has been free of any signs of recurrence for nearly 10 years. That’s one of the reasons it’s easier for me to talk these days about the etiology of this strange zombie journey. 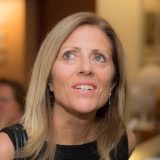