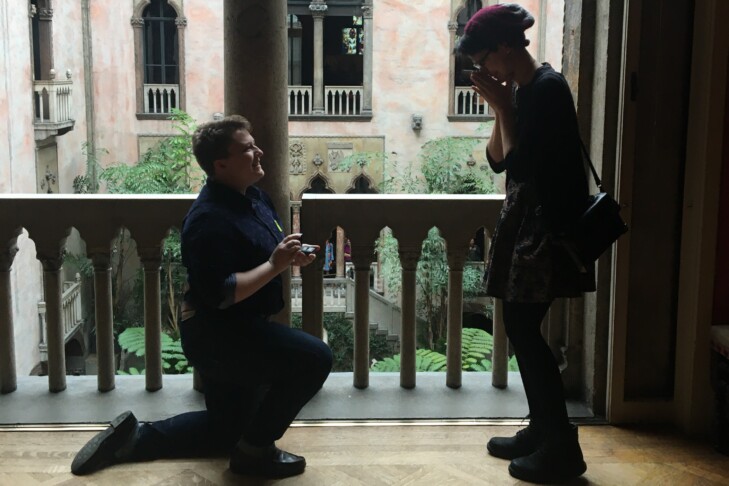 Wedding stuff for gay people is weird. Same-sex marriage wasn’t legalized in all 50 states until 2015, and even after it was, there are so many intricate, gendered rules that simply don’t apply to most same-sex couples. Long before my partner and I made it official, we delightedly shopped around for rings amidst straight couples and discussed the minute details of our hypothetical lesbian Jewish wedding. However, the question remained: Who should propose? I personally had no qualms about proposing and was more than willing to pop the question first, but a little part of me wanted to be the shocked, excited bride-to-be looking down at a gorgeous ring.

Regardless, I hatched a plan. My partner’s best friend, Katie, was visiting us for a few days, and I enlisted her as the secret picture-taker for my proposal at the Museum of Fine Arts. I’d planned to propose in front of two of Rothko’s black paintings that kept residence in the contemporary section but discovered two days before the proposal that they had only been there for a year and had long since been returned to their original home.

“The Rothkos don’t live there anymore!” I messaged Katie in a frenzy, which in hindsight sounds like a secret code indicating the start of a coup d’état. She assured me that I would figure out the right time to propose, and yet I agonized for the remaining days, completely unaware of what was coming.

“What do you think about taking Katie to the Isabella Stewart Gardner Museum?” My partner Olivia asked me casually over breakfast, and bells went off in my head. I eyed her. Her face remained placid.

“That sounds nice,” I said in a very unsuspicious manner. “We can do the MFA and the Gardner Museum on the same day.”

Olivia raised her eyebrows at me in an equally unsuspicious manner, but neither of us said anything more. 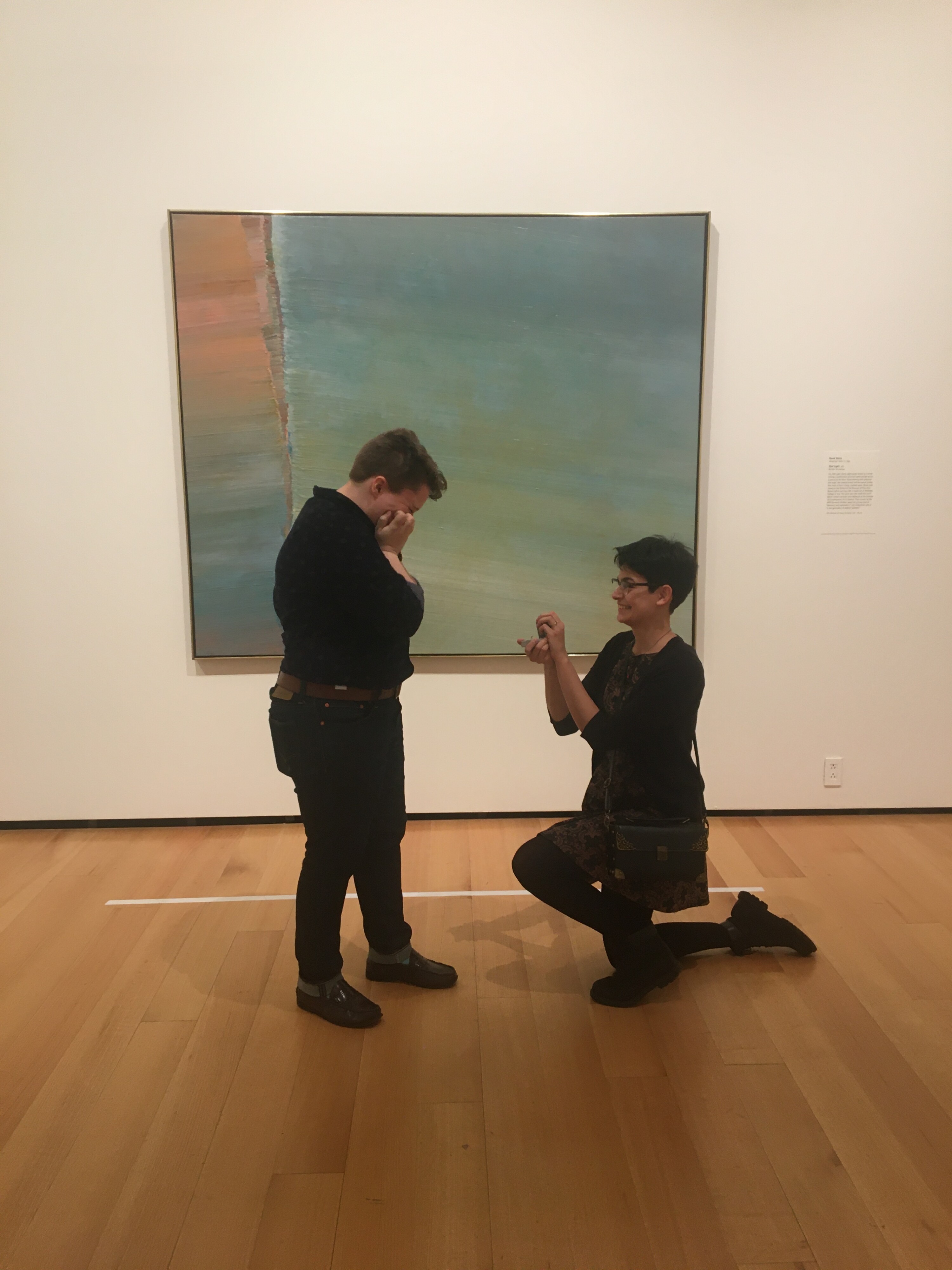 Unbeknownst to me, however, Olivia had the same conversation with Katie, discussing her plans to propose on the same day in the Titian room at the Isabella Stewart Gardner Museum. Katie, in an act of incredible discretion, kept this joint proposal a secret from each of us.

We wandered through the Isabella Stewart Gardner Museum first, ostensibly showing Katie around the city for her visit. I snuck a furtive glance at Olivia’s back pocket for the outline of a ring box, but there was none.  I felt, strangely, a flutter of disappointment, but we continued through the museum and paused in the Titian room, where an enormous group of high school students gazed out onto the garden from three stories up. After they’d moved, Olivia and I stepped onto the balcony. In the first picture, Olivia is looking into the camera like an imp while I, completely unaware, look upon the garden.

“I love coming here with you,” she said to me. “There’s something I want to ask you.”

I wanted to be cool. I wanted to gasp attractively when she got down on one knee and cement the image in my mind forever. Instead, I burst into tears.

The nice thing about a museum proposal is that it isn’t terribly public. Everyone is trying to be quiet, lost in the depths of art. For a moment, there was no tour group, no museum guard. It was just me and her and the glowing winter light filtering through the glass ceiling.

I said yes. Of course, I said yes, and then two hours later, I got down on my own knee in the quiet MFA and asked her to marry me, just to make super extra sure. Simultaneous proposals aren’t exactly common, but they do indicate a certain readiness, a mutual understanding between two people that yes, we do want to hang out forever until one of us is dead. And when I woke up the next morning next to my fiancée, the cat curled up between us, I realized that my dream of a loving Jewish home was finally coming to fruition.