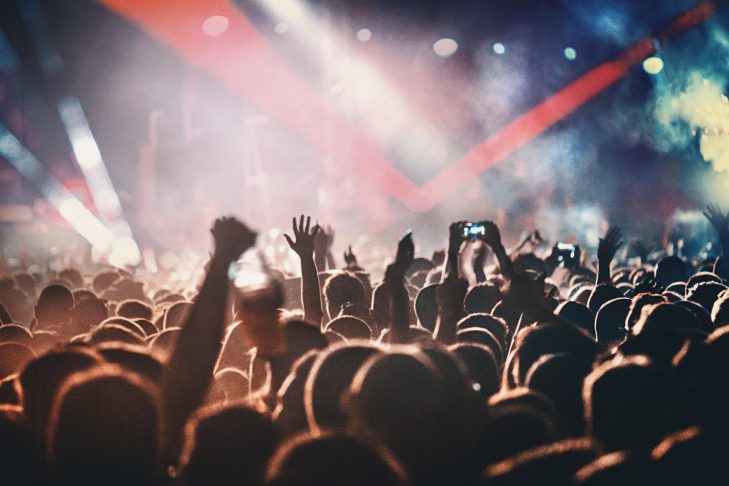 For some reason, I was excited about getting my first set of hearing aids. I had recently turned 31, and for most people that age, the notion of a lifetime with corrective devices most closely associated with those over 75 should not have been particularly thrilling. Not like I was getting a new car or going on a great vacation.

But there I was, sitting in the audiologist’s office, ready for a whole new world (or a return to the one I was in half a lifetime earlier). With gloved fingers, the nurse took each tiny device by a nearly invisible plastic wire and inserted them with a quarter twist into each ear canal. Within a second, a welcoming tone assured me they were on and working properly. Then the noises started coming and I felt the overwhelming urge to vomit.

I had officially rejoined the land of the hearing, and it was awful. I was (sort of) back where I was the day before I went to the Worcester Centrum on a steamy August night as a teenage concert goer.

I lost most of my high-register hearing at approximately 9:45 p.m. on Aug. 15, 1986. I was at my second rock concert. Van Halen, with new front man Sammy Hagar, was headlining the “5150” tour, and it was the hottest ticket in New England.

My teenage brain didn’t ask my ears whether they wanted to go. I didn’t bring any ear protection for them. They had a miserable time.

When the concert ended, my head felt like it had just been on the receiving end of a roundhouse kick. It sounded like someone had locked me into an echoing toilet stall that was surrounded by foam. Sounds were hollow and muffled and didn’t quite make it all the way to my brain.

I recovered after a week or so, but not completely.

Van Halen was painfully loud, but far short of the loudest band out there. That title, according to amp manufacturer Gibson, is shared by a number of classic rockers: The Who, a band that played at a sustained 126 decibels; AC/DC and Led Zeppelin, which tied at 130; and the all-time winner, Kiss, which attained a mind-shattering 136 decibels in 2009, just shy of the140 decibels typically heard on the deck of an aircraft carrier. 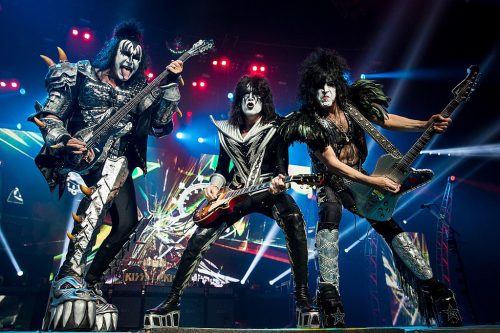 Kiss played the loudest concert in history, destroying the ears of 20,000 or so Canadians at a 2009 show in Ottawa. (Courtesy photo)

The website Dangerous Decibels estimates that, with unprotected ears, exposure damage from loud noises can happen in under 15 seconds at just 115 decibels. If I conservatively estimate 120 decibels from Van Halen back in 1986—and combine the sound from opening act Mountain—I was exposed to dangerous levels of sound as a 15-year-old for nearly three hours.

Lest you think insanely loud noises were limited to the ‘80s and the Worcester Centrum (now DCU Center), consider my morning commute.

The average MBTA Red Line train ranges between 92-102 decibels at cruising speed. That’s a little less than a chainsaw but feels just as grating.

Most commuters wear headphones. But then you’re making yourself an ear-destroying cocktail—cranking your personal earbuds to block the train racket.

In his book, “Zero Decibels: The Quest for Absolute Silence,” author George Michelsen Foy writes that Boston Children’s Hospital estimated that headphones/earbuds plus Red Line subway noise reaches 120 decibels, on average. Essentially, you’re listening to a 737 at runway level. (Most useful analogies for the 110 decibels-plus range involve airplanes, in case you didn’t notice.) 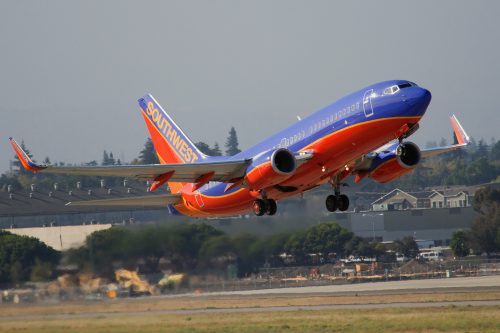 If you’re riding the T and wearing non-noise isolating/canceling headphones, you’re basically hearing the equivalent of a plane take off for the duration of the trip. (Photo: Wikipedia Commons)

Alas, my ears are halfway gone, so I worry less than most about the commuting noise.

I knew I had lost a significant portion of my ability to hear long before my audiologist said my hearing test chart looked like it was “falling off a cliff” at high registers. I always sat in the front of the class in high school and college. I avoided conversations with people who mumbled or had high voices. I became a proficient lip reader. I watched TV with the volume cranked. The medical world calls this sensorineural hearing loss, or damage to the tiny hairs inside the ear from prolonged exposure to, you know, Van F’ing Halen.

I had gotten used to it though, in my own way. Until I noticed that it was impacting my performance at work.

Not hearing much was difficult, but honestly, my first day with hearing aids was tougher. I felt dizzy. I put the hearing aids away as soon as I could, retreating into my car, exhaling in the silence. Sure, I was going deaf, but the world had gone mad since I could last really hear it, and the solitude was comforting.

Now the hearing aids are an essential part of my life, my link to most of humanity. 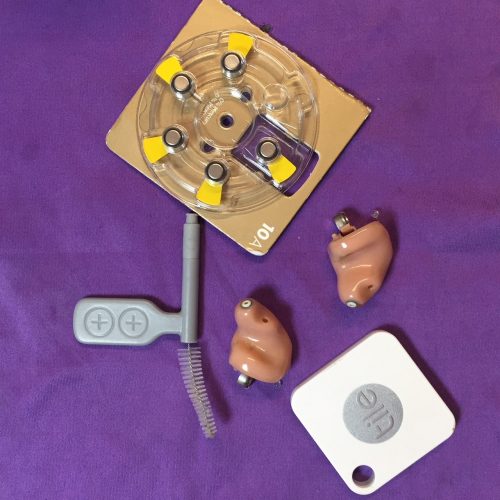 My fifth pair of hearing aids along with the essentials: size 10 batteries, a cleaning stick and, of course, a Tile for the next time I lose them. (Photo: Dan Seligson)

I’m used to them, but not everyone is. Seeing hearing aids in a relatively young person surprises people. Hearing loss, as opposed to deafness, is almost always considered to be age-related. When I go see my audiologist, I’m the youngest patient by 20 or 30 years.

The age stigma is all too real. The vast majority of people under 75 don’t have hearing aids. As a result, it’s associated with old age. A therapist I saw for about a year in D.C. told me that I should think of hearing aids as glasses. “If your eyes didn’t function correctly, you’d wear glasses to correct them. Why is that different for your ears?”

I gave her quite a few reasons: Those with hearing loss aren’t treated like people who need to wear glasses to drive. We need to be treated a little differently, though most people initially don’t know that.

I know my hearing limitations are sometimes a burden to the people around me. No one wants to have a conversation with a mostly deaf grandparent, repeating the same three words over and over. (Which ’80s child among us can forget that awkward business lunch in the Miracle Ear commercial?) Yet that’s where I’m sure I’m headed.

At work, my hearing impairment can still surprise people. That’s why I’ve taken to warning them, “If I don’t respond to you, or better yet, answer a question you didn’t ask, assume I didn’t hear you.”

Aware of my problem, my employer is extremely accommodating. I have a desk in the far back corner, where I can see people coming and be largely spared various sounds that make hearing conversation difficult. During department meetings, the white noise machine pumped through the office is turned off after I said it confused me since I have to make a choice—hear the hum of the white noise or whoever is talking.

Also—and this is for you, therapist of my past—glasses can correct my vision to 20-20. Hearing aids absolutely cannot correct my ears to an ideal hearing range for someone my age. For all the expense and technology, they’re still a hell of a lot dumber than the human brain and a sorry replacement for undamaged, functioning ears.

So even those of us wearing hearing aids need strategies for everyday life.

If you have average hearing, you probably don’t appreciate how different everyone sounds—how your breathing affects your speaking, your intonation, how you start and finish sentences, up-talking, down-talking, vocal fry (the kids are doing that now, right?), pronunciation, elocution, subtle regional accents and so forth. You’re just talking, right?

For each person I interact with, I create what I call an “audio profile” so I’m prepared for the situation. I try to anticipate the conversation, figure out whether I need to toggle the volume or find a better room with fewer distractions.

There’s my friend “Eddie,” who speaks so loudly and clearly that I can go “au naturel,” sans my little electronic friends. There’s “Mike,” who has a low voice but swallows the end of his words, or “Jon,” who strings too many words together for me to understand. There’s my former colleague, “Mary,” whose soft, high voice was so hard to understand that I asked her to email me questions, though she sat less than 12 feet away from me.

An all-too-common strategy I use is faking it. If, despite the hearing aids, I still can’t understand someone, I will only say “What?” about three times (on average) before I start to feel weird or embarrassed, so sometimes I give up, smile or nod in what I think is agreement, and slink away hoping I didn’t somehow humiliate myself.

Home is a lot easier. My wife is patient. God knows how many times a day she has to repeat herself when asking me questions, but she does it. And she adheres to our “same-room rule” when asking each other questions or having conversations, though lately she has wondered—given the challenges—why I don’t start wearing my hearing aids at home. My kids, two girls ages 3 and 7, know about daddy’s “robot ears,” though they can get frustrated when I don’t understand them.

For the most part, hearing aids have been a blessing. I wasn’t raised as a deaf person, so I have no deaf culture that I grew up with. I have no idea how I would work, interact or have hearing friends without them. Hearing loss has been associated with depression, social isolation and, not surprisingly, suicide. There’s no support group (that I know of or that I’d have time to join) for the half deaf, and few accommodations are made in everyday life.

I should be grateful. My “robot ears” keep me involved, engaged and, frankly, employed. I know now that I had nothing to be excited about that day so many years ago in my audiologist’s office. But I have reached an uneasy compromise with myself—the hearing aids will keep me connected to the larger world and, in exchange, I’ll suck up the loss of pride and vanity. Just know that as soon as I get the chance, I’m taking these things off and retreating into the (near) silence.