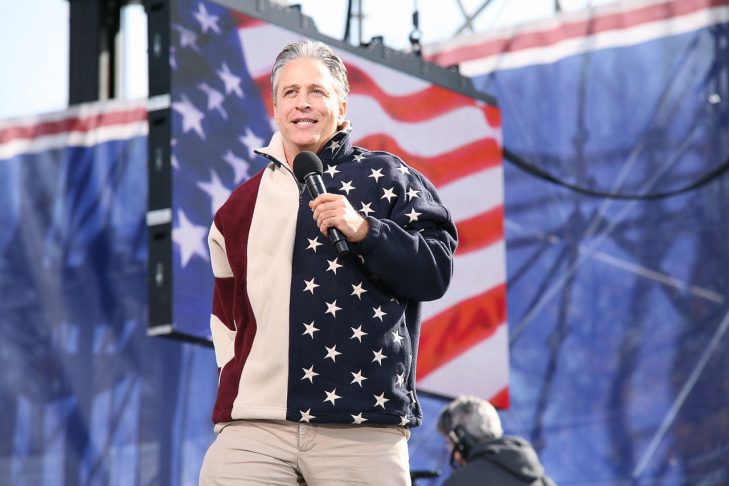 The fantastic Jon Stewart with a microphone in his left hand. (Photo: Cliff/Flickr)

To celebrate finishing our summer finals at UC Berkeley, one of my roommates and I explored San Francisco for the day. Aug. 13, 2012, was classic Bay Area-beautiful and we, free from academia’s clutches, were excited to enjoy it. I was intent on making one of our stops Pier 39 for the sea lions, a sweet view of Alcatraz and Lefty’s, a store I had heard about that promised to eradicate my #LeftyProblems.

I felt warm and fuzzy as soon as I walked through the door. Sergio, a righty, and I began browsing, joking around with all the fantastic merchandise like dribble mugs, which have a hole on the side right-handed people tilt toward them when they drink coffee, and left-handed can openers. After about five minutes, a store employee announced lefty trivia would soon begin in honor of it being International Left Handers Day. I had never heard of it but he assured me it was quite real. Falling every Aug. 13, International Left Handers Day raises awareness of the day-to-day struggles left-handed people face by encouraging the right-handed to do everything with their left hand. 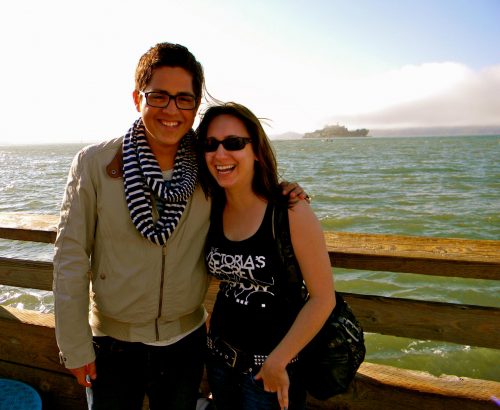 Sergio and me at Pier 39 before heading into Lefty’s. (Note how I’m on his left!)

FINALLY. Not only was I in a store designed for my people and filled with everyday objects 90 percent of the population don’t think twice about, I was there on a day created to spread awareness of our plight! Needless to say, I came in first place (I received the second-place ribbon until a scoring mix-up revealed my true victory), winning over $100 to spend on things that would make my life easier.

I left California with these treasures, including a pair of scissors I can actually use, an oven mitt made just for me, wooden mixing spoons that slant properly, a leather portfolio with the legal pad on the left side and a left-handed can opener. That hour of acceptance came from a lifetime of being an outcast. While we lefties tend to congregate together (two of my best friends are left-handed), the way in which the world is constructed reminds us how separated we are. 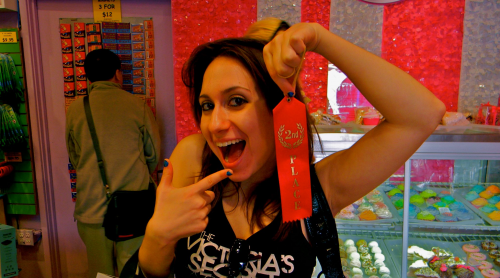 Me in Lefty’s, pictured with the second-place ribbon, because I’m not that person. (Photo: Sergio Ruiz Tello)

School craft projects were messier than they needed to be and school supply lists sucked (do we really have to get binders?). In the lefty community in college, there were lefty high fives, outcries over the substantive lack of the dreaded chair desks designed just for us, strategic seating across rows and the collective sigh upon noticing how smudged our notes were and how ink-stained our left hand became from smearing them. Out here in the right-handed real world, there are can openers (the bane of my existence), those burn hazards called oven mitts and too many allusions to the “evil” of the left.

Perhaps the most common language associations made with left-handedness are sinister (Latin) and gauche (French). Other international synonyms for “left” include Sanskrit’s “wicked” and Chinese’s “wrong.” Meanwhile, “right” has more “righteous” connotations. Droit means both “right” and “law” in French; maladroit, a French synonym for gauche, literally translates into “bad at law.” (I knew my eight years studying French would count for something!) In English, both words mean “awkward.” In Hebrew, se’mol (שְׂמֹאול)—“left side”—comes from Samael, the “Angel of Death” and “Prince of Demons,” who, according to the Talmud, sits on God’s left. But aren’t things like that the very thinking behind superstitions?

No one ever grabbed crayons out of my hand or reacted to my left-handedness by declaring, “I saw Ashley Jacobs with the devil!” (What is this, “The Crucible”?) The same, however, cannot be said for a left-handed ex-boyfriend, whose Catholic grandmother tried convincing his parents to tie his hand behind his back. Throwing spilled salt over your left shoulder is supposed to blind the evil spirits that wait there. The devil has typically been depicted as a lefty in art. Pop culture is also guilty! As JewishBoston’s authority on Harry Potter, I’d be remiss if I didn’t point out how Lord Voldemort puts the Dark Mark (a skull with a serpent coming out of its mouth) on every Death Eater’s left arm. 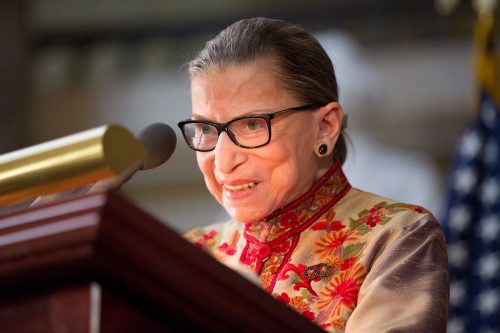 As has become the case when I come up with content ideas for JewishBoston, I decided to look at how Judaism views something I only think about when the comparison is forced in front of me. In the face of the archaic and widespread “left is evil” notion, I found Judaism’s emphasis is on balance and strength.

Judaism’s view of good and evil manifests in yetzer hatov—“the good inclination”—and yetzer hara—“the evil inclination.” Sitting at the very core of free will, the tensions between these instincts enable us to get what we want. An excellent piece by David Holzel sums this up: “Far from a demonic force that needs to be destroyed, yetzer hara represents creativity, ambition and will.” In Kabbalah, the right side is chesed—“kindness”—and the left side is gevurah—“judgment” or “might.” Both work together: “The might of gevurah becomes the power and forcefulness to implement one’s innate desire of chesed. Only by the power of gevurah is chesed able to penetrate the coarse, opposing surface of reality” (Gal Einai Institute).

Looking beyond good and evil to the literal left hand reveals nothing marked with contempt: The Tribe of Benjamin’s soldiers comprised both left-handed and ambidextrous fighters (Judges 20:16 and 1 Chronicles 12:2), yet Benyamin means “son of my right hand” (Genesis 35:18). I’m comforted that being a southpaw gives me an advantage if I ever get in a fight; the assailant won’t see it coming. Certain mitzvot are done with the stronger hand, and if you’re left-handed, your left hand is stronger than your right. For example, tefillin is worn around the weaker arm, so lefties wrap tefillin around their right. Even though there are exceptions, some room has been carved for us. 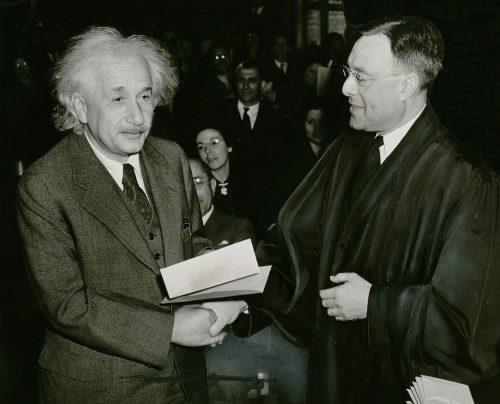 In general, the right-hand biases and conveniences around which society has constructed itself enable culture—however contemporary it may be—to perpetuate antiquated standards. How do we lefties command our own space?