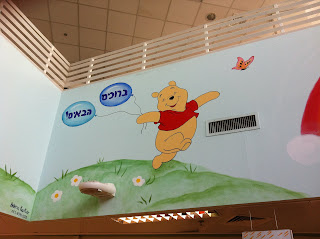 In a whirlwind trip, women discover the power of one
Heart to Heart shows their dollars at work

When you enter the hospital, you are greeted by a huge, colorful mural. There are a rainbow and a dancing Winnie the Pooh, balloons in hand, one of which is inscribed with “Baruchim Habaim, Welcome Friends.” I knew then I would not leave without shedding tears.

This was the third of five days I spent in Israel, and I was beginning to feel the rush of exhaustion and exhilaration one gets after jet lag sets in. Thrilled to be traveling with two of my closest friends from Boston and 85 other American women, I was on a mission sponsored by the Jewish Federations of North America’s (JFNA) Women’s Philanthropy division.

We had come to Be’er Sheva, to the Soroka Hospital for Children, to meet the teachers and the students of the World Ort Kav Or program, which helps ill children continue their studies during a prolonged hospital stay. After hearing from the hospital director and educational coordinator, we were divided into small groups to visit the wards and view the program in action.

I was immediately moved by the children and their families – Israelis in bright clothing and Arabs in traditional dress – who were sitting together in small rooms or working in the cheerful classrooms. My eyes fixed upon a teenage boy, wearing a hospital gown, and sitting with an instructor at a small desk. On closer look, I saw that the youngster was working on complicated math problems and he had payus wrapped behind his ears.

Realizing I was staring, I turned to join my companions and became conscious of how out of place we must have seemed. A strong sense of obligation washed over me: It was incumbent upon us to tiptoe lightly through this reality of other people’s lives.

And then out of the corner of my eye, I saw her. A woman in her late 30s sat off to the side, on a folding chair placed against the gray tile wall. She was quietly watching us while slowly sipping from a paper cup. It was apparent from the way she was dressed – long skirt and sleeves, beret covering her hair – that she was an observant Jew. Thousands of miles away from home, I felt an instant bond with this stranger: She was a mother.

She looked up from her cup, and I took the opportunity to say, “Shalom.”
“Shalom,” she replied.

“Medaberet Ivrit? Do you speak English?”

With a wave of her hand, she asked who we were. Choosing my words carefully, I explained that we were Americans, members of an organization that supported the hospital school. I asked if the young man studying math was her son. She said yes, and that he had been there a week with another yet to go. I did not ask why he was there; she did not say. But at that moment, I was no longer a visitor; she was no longer a Sabra. We were sharing the worry for her son. I looked at her as my eyes began to water and said, “I wish him a Refuah Sheleimah, a return to good health.” She too began to weep and said, “Thank you, and thank everyone for their help here.” I said goodbye and moved on, touched by this private encounter.

The Heart to Heart (H2H) mission is an invitation to all women, at any stage of their lives, to take the leap and travel alone, and together, to our homeland. Participants include young mothers, empty nesters, career women and retired teachers; seasoned federation volunteers and professionals and first-time givers; mothers with adult daughters, real sisters – and best friends who wish they were. The most moving traveler this year was the survivor of the Shoah, who came with her daughter and grandson’s wife, a Jew by choice. Israel beckons you, everyone, to fulfill the mitzvah to be there.

Begun in 2010, this whirlwind tour was designed to show donors “where the dollars go.” It is five days of fast-paced, intensive traveling, geared to introducing us to Jewish Agency and Joint Distribution Committee programs, funded in part by annual federation gifts. This was H2H’s second year, and I was a returning participant. Many of my fellow travelers were Lions of Judah, those who give at the highest levels; dozens of others were like me, women who work for community agencies, were new to the federation family or had never been to Israel. We came to be inspired by the energy and commitment of our local and national federations, 157 strong, who make a difference every day in the lives of Israel’s people.

That initial trip was my first to Israel in 37 years. After a busy year, it was the small ad on the Combined Jewish Philanthropy Web site that beckoned. I was increasingly embarrassed to work in the Jewish community and say I had not been to Israel since the age of 15, so now was the time. I haven’t been the same since.

What is it about Israel that moves one in such a powerful way? There is a force, a sense of purpose. Israel has such impossible dilemmas, yet you witness innovative solutions, many funded by American contributions. For instance, juvenile delinquency has recently been addressed with education and business programs that engage young people by boosting their sense of self-worth. We saw those initiatives, as well as others for new immigrant young adults, Ethiopian children and families at risk.

The distinctive nature of the H2H trip is the opportunity for each woman to understand the power of one: I am a philanthropist. Whether you give $500, the minimum gift to participate on the trip, or $5,000, the initial Lion of Judah commitment, a woman’s gift makes an impact, first on her local community, such as for Jewish education, and then on, say, an Ethiopian youngster in the Carmel valley or an elderly woman in Jerusalem.

At the day school where I work, learning about Israel and its people, language and culture is integral to the curriculum. After I returned, I found myself drifting toward the classrooms whenever our Hebrew teachers were speaking. It was a clarion call, a wonderful reprisal of all I had encountered the previous week.

Why do I go back? For five carefully orchestrated, intensely moving 14-hour days, I am incredibly lucky to be offered a chance to see through the eyes of these extraordinary women. A view of the power of what we can do, alone and together. I will go again, with an open mind and a joyful heart, because to be in Israel is to be transformed.

Jan Moidel Schwartz is the Director of Development at the Metrowest Jewish Day School in Framingham MA.
www.mwjds.org
First published in Boston’s The Jewish Advocate, May 5, 2011
To subscribe, www.thejewishadvocate.com
Never miss the best stories and events! Get JewishBoston This Week.