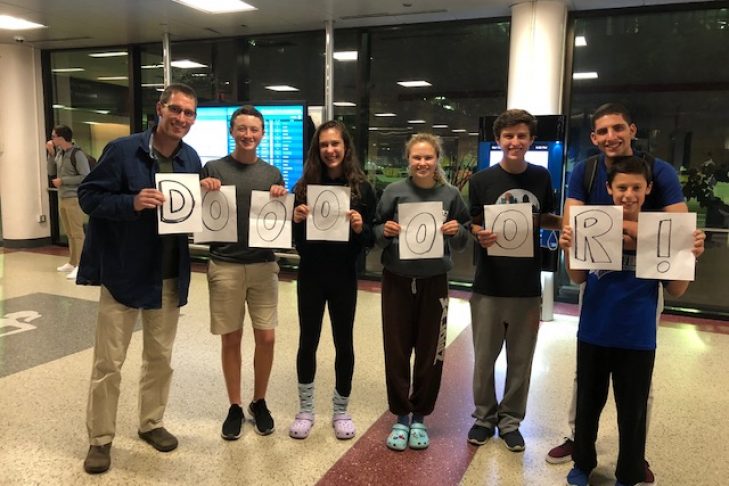 An Israeli young man, barely out of his teens, sits at the head of the dining room table in a lovely suburban home outside of Boston and calmly shares his combat experiences in the Israel Defense Forces (IDF), Israel’s citizen army.

Dor, our returning Shinshin, is taking a week’s precious vacation time from the IDF to return to visit us in Boston, now his second home. As a “Shinshin,” he served as a cultural ambassador for Israel, along with his partner, Nisso, doing a post-high school gap year of community service in the Boston area during 2017-18. The Shinshinim Young Ambassadors Program is made possible through the partnership of CJP’s Boston-Haifa Connection, The Jewish Agency for Israel and area Jewish communal institutions, such as synagogues and day schools. Dor and Nisso touched the lives of hundreds of community members young and old by sharing their personal Israel stories, and drawing us closer to Israel. With only a week’s notice in advance of his visit, Dor’s former host family immediately invited him to stay in his old bedroom, and the staff and volunteers of the CJP Boston-Haifa Connection Living Bridges Committee adjusted their schedules to spend meaningful time with him. Dor also visited with young and old at a few of his former work sites, including Temple Emunah in Lexington and The Rashi School in Dedham.

Dor has always been a remarkable young man—completely dedicated to his mission and eager to do the right thing at all times. He continues to be a deep thinker who cares passionately about Israel, the Israel-Diaspora relationship, and about people. When he inquired as to how Boston’s two Shinshinim made out last year, and I told him how successful they were, he beamed and said they must have exceeded what he and Nisso had accomplished the year before. Of course, as any good “parent” would do, I told him that was not the case. However, I did concede that as our nascent Shinshin program continues to develop from year to year, it is becoming stronger because we are learning more about best practices. The point is that Dor always subordinates his own ego to the larger good.

Hearing Dor’s military stories were so eye-opening, not only because this is always the case with firsthand accounts, but also because for those of us in the Boston Jewish community who knew Dor as a pre-army teen, this is a unique opportunity to witness the before and after: What turns a young man into a combat soldier? How is he the same? How has he changed?

Mind you, very few in the IDF become combat soldiers. The majority do not. Of the six Shinshinim I supervised at CJP over three years, two have chosen combat roles, but Dor is our first who has returned to share his experiences with us.

It is immediately clear what aspects of Dor’s character are the same, some of which I have already mentioned. He continues to be incredibly polite, sensitive and interested in our lives. He always had excellent recall on the details of his schedule as a Shinshin, and he still remembers so many events and people, and inquires as to their well-being. And he enjoyed attending Shabbat services at his adopted Conservative shul, Temple Emunah, despite the fact that this is not customary for him in Israel. 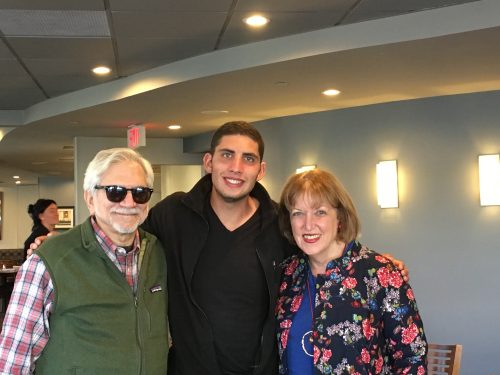 But how has Dor changed? Truthfully, it’s not at all obvious, so we inquired what in his training “turned him into a soldier.” He talked about some of the grueling experiences of basic training that ultimately instilled in him a strong ability to survive the most adverse circumstances, including hunger, thirst and sleep deprivation.

Dor described an exercise of performing a simulated rescue of wounded comrades when there were not enough stretchers to go around. Dor hoisted one of the “injured” on his back and ran two miles to safety. Experiences like these change a person and bring out hidden strength and leadership capacity. Not only has Dor honed his survival skills, he has also learned how to take initiative and attend to the needs of his “brothers” at all costs. As a Shinshin, Dor became accustomed to stepping up to challenges and going beyond his comfort zone. It was good training for the IDF.

Leadership opportunities were one of the reasons Dor opted into an infantry unit. He was selected to lead his four-man squad and will now train to become a commander. Israeli combat units represent the entire spectrum of Israeli society, including soldiers of different ethnic, political and socio-economic backgrounds. A combat unit is therefore an ideal setting for exercising leadership. It’s one of the most critical roles in any army, as it requires the ability to motivate team members as well as to impart ethical values in the face of the most challenging circumstances. Dor’s sensitivity to his fellow man, his positive team attitude and his humanity will serve him well in this regard.

Dor is the “baby” of a family of three sons, and the only one of the three to choose combat service. He has been stationed for the past four months on the Gaza border, and has been in dangerous circumstances there. The news reports convey only a fraction of what transpires on a daily basis. Indeed, a young man in his brigade was killed in action during Dor’s current service. He has become accustomed to fewer hours of sleep and has learned not to shut his eyes when exhausted. He has been trained on how to aid a fellow soldier who may be experiencing trauma.

Dor is fulfilling his lifelong dream of playing his part in protecting the home front, a dream he held from early childhood when he recalls enemy missiles flying over his home in Haifa. However, Dor does not regard himself as special in his IDF role. He’s merely doing his duty. Dor’s dad is beyond mandatory official army reserve service but continues to volunteer once a week as a psychologist in an IDF military jail to work with troubled soldiers. Is it any wonder where Dor’s idealism and Zionist commitment derive from?

Dor wants to become an IDF officer. After this, he wishes to study international relations and possibly work abroad again helping to create bridges of understanding between people and societies. He wants to learn Arabic because he believes it’s important for every Israeli to know the language of 20 percent of the country’s citizens. I can only imagine how much being on the front lines of warfare can impact one’s commitment to peaceful resolution of disputes.

It is an honor and privilege for me personally to have played a small part in the building of this young leader of whom we are all so proud. Dor grew as a Shinshin and will continue to grow as an IDF commander. Yet, despite his army training and combat experience, in the aspects of his character that matter, Dor remains a humane, motivated and idealistic young man—a “mensch” who has learned how to be a soldier, but who’s essentially unchanged. Anyone who does not understand the Dors of Israel and the IDF does not understand the humanity of the country and its citizen army. I only wish more could see what we in Boston have seen and heard, because it’s truly inspiring.