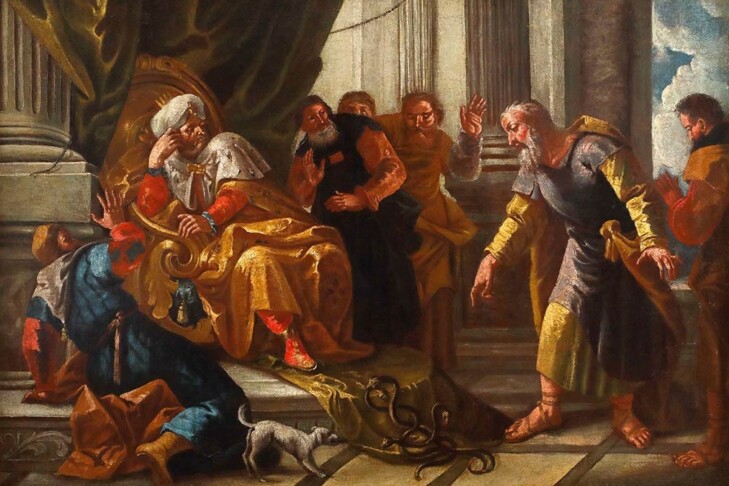 I wrote this reflection on Parashat Va’eira in January 2020, before the onset of the pandemic. It has been revised and republished with the understanding that it is uncannily more relevant now than it was a year ago. Every day we wake up to the horrific news of more sick, more dying, while many are isolated, impoverished, suffering from depression and anxiety, with trauma lodged within the individual and collective body. How do we heal from such trauma? This essay explores the way the Israelites, playing with the “scrolls of redemption” on Shabbat, learned how to breathe hope and freedom through the crushing servitude in Egypt.

I recently heard a fascinating interview with the psychiatrist Bessel van der Kolk, an expert on the treatment of trauma. He defines trauma as overwhelmingly negative experiences which become lodged in the body beyond the reach of language. As an expert on PTSD (post-traumatic stress disorder), he maintains that the “talking cure”—the traditional psychoanalytic attempt to make a coherent narrative of one’s trauma—cannot really help patients, but embodied work such as EMDR (eye movement desensitization and reprocessing therapy), mindfulness and even yoga can. This week’s Torah reading speaks to that very attempt to provide the “talking cure” to the Israelites, yet they will have none of it! They cannot yet transform their suffering—imprinted in their whipped, humiliated and mud-wracked bodies—into a coherent or meaningful story.

Parashat Va’eira opens with the great speech of redemption, promising that God will free the Israelites from slavery with the proverbial outstretched arm and mighty acts of judgment, for “I am the LORD (Yhwh, God as Being-Present-with/Becoming-for Israel) your God, who has freed you from the burdens of the Egyptians” (Exodus 6:7). Yet as soon as Moses delivers these eloquent words of hope, the story threatens to come to a grinding halt for the people would not listen to him. Why could they not hear the great redemption speech? Millenia later, these very words would become the basis for the Haggadah that we recite every year at Passover as we make meaning of that past collective trauma. The four verbs in God’s promise—“ve-hotz’eti…ve-hitzalti…ve-ga’alti…ve-laqaḥti, I will free you…save you…redeem you…and take you to be my people…” (vv. 6-7)—are ritually linked to the drinking of four cups of wine during the seder (Mishnah Berurah 472:43). Yet when first relayed to the people, they were not heard, because of Israel’s “broken spirit (qotzer ruaḥ, lit. shortness of breath) and their cruel bondage” (Exodus 6:9, NRSV). What happened to cause such despair?

In the previous chapter, we read that Pharaoh, in response to Moses and Aaron’s request “to Let the people go” (5:1), intensified the harsh labor by withholding straw from the Israelites while insisting that they maintain the quota of bricks (vv. 8-9). They would need to gather the straw themselves—the thistles and thorns wounding their fingers and feet so they would bleed into the brick work as they kneaded the clay into rectangular molds. (Straw was essential to the binding of the clay when baked into bricks. At my Passover seder, I have a tradition of commemorating the cruel effects of the straw by sticking whole cinnamon sticks into the charoset, symbolic of the mortar and brick.)  As an additional consequence of this decree, the slaves were forced to relinquish Shabbat in order to keep up the quotas. Seven days a week, 12-hour days of back-breaking work. No time for leisure, mindfulness or meditation. In Pharaoh’s words, he accuses them of being shirkers, lazy or lax (nirpim), and decrees: “Let heavier work be laid upon them; let them labor at it, and not pay attention to deceptive words (‘al yish‘u be-divrei shaqer)” (5:9).

What is that they were doing in attending to false words or, as Targum Onqelos suggests, by engaging in “empty or wasteful language (pitgamin beteilin)”? According to the plain sense, this might refers to the request to let the people go that they might worship God in the wilderness. Yet the verb yish‘u—to pay attention, gaze or focus one’s regard (root: שעה)—is unusual. It often refers to religious observance, as in Isaiah’s prophecy that one day Israel will cease to regard idolatrous altars and focus on the One God alone (17:7-8), or, with respect to divine regard, when God heeds Abel’s but not Cain’s offering (Genesis 4:4-5). The Midrash Tanhuma (Va’era 6), however, links it to the double root of שעע, sha‘ashu‘a, meaning play:

What is “’al yish‘u”? They had scrolls in their hands, with which they would play (mishta‘ash‘in) from Shabbat to Shabbat, saying God would redeem them. So Pharaoh said to them, “’al yish‘u be-divrei shaqer—Let them not pay attention to deceptive words”; that is, let them not play, meaning let them not rest (nafishim, lit. breathe) [on Shabbat], as it says “On that day, Pharaoh commanded the taskmasters and foremen of the people…” (Exodus 5:6).

When Pharaoh deprives them of Shabbat, he takes away their scrolls of play that roll and unroll (presumably to be read), and so deprives them of the ability to breathe through the labor (nafishin). They are left only with “broken spirits,” their breathing shallow (qotzer ruaḥ), a manifestation of anxiety or panic. As Dr. van der Kolk remarks: “The big issue for traumatized people is that they don’t own themselves anymore. Any loud sound, anybody insulting them, hurting them, saying bad things, can hijack them away from themselves.” And so the Israelites cannot hear Moses’ redemption speech to them. The harsh, unrelenting work is “soul stealing.” Even when the words—ve-hotz’eti…ve-hitzalti…ve-ga’alti…ve-laqaḥti, I will free you…save you…redeem you…and take you to be my people…” (vv. 6-7)—might have been familiar from the “scrolls of redemption,” they are impervious to the message.

The question remains: How do they learn to hear? How do they heal?  How do we transform that collective trauma of our people into a narrative of redemption? In my yoga studio (when I could go to the studio), there was a sign by the stairs: “The quieter you become, the more you can hear.” (Every morning these days, I wake up to a dry throat, cough, shortness of breath and wonder: Do I have the coronavirus yet? Thank God, no! I have to learn to breathe and hear deeply again with yoga online.) So, I imagine the Israelites playing with theses scrolls in their hands, pantomime, no words but opening and closing, rolling and unrolling the parchment etched with letters. Their bodies and minds turned toward play, toward the sense of the “Eternity in Time” (Heschel’s term) that Shabbat offers. As Isaiah intoned, “If you refrain from trampling Shabbat, from pursuing your own affairs on my holy day; if you call Shabbat a ‘delight’…then you shall take delight in the LORD (Yhwh, God as Being-Present-with/Becoming-for Israel)…” (58:13-14). To call Shabbat a “delight” is to engage in the play that only the presence of Eternity in time can offer. So I bless you with deep breathing this Shabbat, a counter to the obtuseness to hearing and an openness to Presence with and for you.

Rachel Adelman is associate professor of Hebrew Bible at Hebrew College Rabbinical School. She received her Ph.D. at Hebrew University in Jerusalem. When she is not writing books, articles or divrei Torah, it is poetry that flows from her pen.