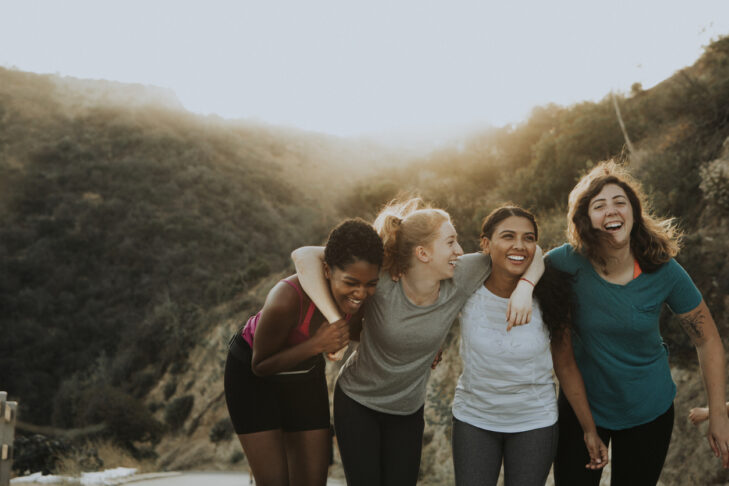 As a kid, I mostly had female friends. Women sometimes boast about getting along better with men, growing up as “one of the boys,” but I always loved being friends with other women. Girls were just nicer, in my opinion, and my friendships with them lasted longer and through more. In high school, I abandoned my core group of friends for selfish, petty reasons and when I returned to them after a year of silence, they welcomed me back with open arms. Those kinds of friends, the eternal kind.

But as much as I loved (and still love) my friends from high school, there was something missing from their companionship. I couldn’t conceptualize it as a kid; the absence felt less like an emptiness and more like a burned-out lightbulb. Of course, it became clear as I got older. My friends were all variations of Christian. I was not.

If there were other Jewish women my age in my hometown, I wasn’t aware of them. The only other Jewish kids were boys and though I thought they were nice enough, we never shared anything but our religion. I remained adrift until college, when I began attending services at Hillel. Suddenly, I was surrounded by other Jewish women, but I was so used to flying under the radar that I was ill-equipped to form relationships with them. Struggling with my sexuality, I couched myself in non-Jewish friends, feeling at once too Jewish and not Jewish enough.

And then I met Olivia. She guided me back into the fold and grandfathered me into her group of Jewish friends. I discovered that my experiences were not exclusive to me, that other women suffered from the same micro aggressions and prejudice that I did. Jewish women are often stereotyped as “harpies,” shrill and demanding, but this perception is just antisemitism under a fur coat. The Jewish women I met were intelligent and self-assured, and I became aware of that burned-out lightbulb, that tickle of something missing in the back of my mind.

Since then, I’ve sought out relationships with Jewish women. It’s not that my friendships before weren’t rich and meaningful, but there’s an extra level of connection that comes with sitting around a table of Jewish women. We are inextricably linked, not only through observance and tradition, but in intrinsic life experience. The greatest support I’ve felt for my writing has come from Jewish women; the greatest shared joy comes from Jewish women. I feel understood in ways I did not previously believe possible, and I cannot explain where that understanding comes from. As Judaism becomes a more prominent part of my life and as I work toward building a Jewish home, I know I can rely on the women in my life for love, humor and support, and those relationships are unbelievably valuable.