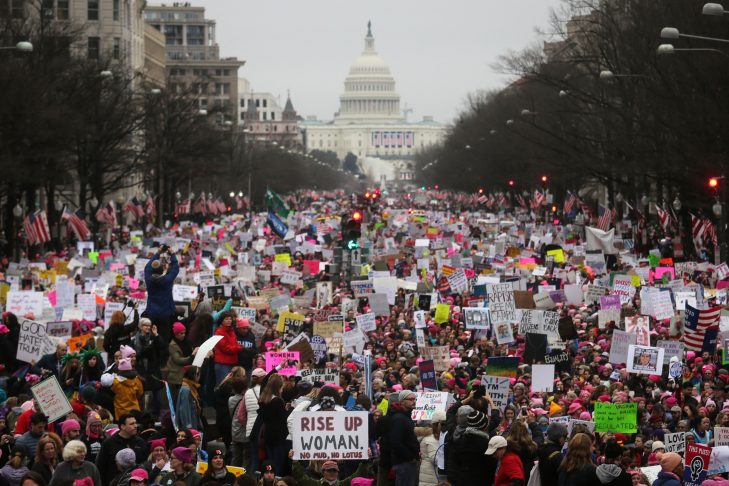 Protesters walk during the Women’s March on Washington, D.C., on Jan. 21, 2017. (Photo by Mario Tama/Getty Images)

When I found out the Women’s March on Washington was on a Saturday, I had an important choice to make.

Like many other Jews, I don’t do work on Shabbat. I love that the practice of Shabbat is modeled on the divine’s day of rest after the creation of a perfect world. So once a week we are given the opportunity to live as if the world is flawless. As if we, through our actions of the past week, have worked hard enough to make the world whole and for one day we are not obligated to labor or make change. We are provided a metaphorical deep breath and chance to reflect on all the good around us.

But Judaism also gives us the principle of pikuach nefesh, the idea that the preservation of human life overrules nearly any other religious consideration. When someone is under immediate threat, our commandments not to act become irrelevant.

The current political situation and the threat of our new administration’s actions is a real and clear threat to people’s lives. It’s not theoretical or a hysterically imagined future. And it is at odds with our Jewish values.

The Torah insists that we maintain the dignity of the poor and work to provide them with a way out of poverty. But President Trump’s administration has promised tax cuts that would reduce federal income by over $6 trillion over the next decade, and experts say that creating his “balanced” budget will plunge more people into poverty: Medicaid will shrink, the Children’s Health Insurance Program will get smaller, the supplemental nutrition assistance program will be cut, housing and energy assistance for the poor will decrease, and more.

Our values tell us we are all created in the image of God and we must value and protect all people, not just those like us. But President Trump has openly mocked a reporter with a disability that impairs the movement of his arms. He removed a webpage from whitehouse.gov that highlighted the government’s commitment to giving people with disabilities access to education and employment. The proposed head of Housing and Urban Development thinks providing fair housing to transgender people is “special treatment.”

President Trump has pledged to force Muslims to register and has implicitly incited nationwide violence against Islamic communities. Steve Bannon, a senior counselor to the president, was executive chairman of Breitbart, a news site that Bannon dubbed the “home of the alt-right”―a synonym for white supremacists and neo-Nazis. And Jeff Sessions, the current pick for U.S. attorney general, has been known to make racist statements and policies and joked that he hadn’t joined the KKK “because members of the group smoked marijuana.”

I didn’t march, as some would accuse, just because “my candidate lost.” I’m taking action because an administration came to power that has already shown itself not only to believe that some people are more human or more deserving than other people, but have already started to create policy based on those discriminatory beliefs—policies that will cost people their livelihoods, their health and their lives.

After marching in Selma, Ala., with the Rev. Martin Luther King Jr., Rabbi Abraham Joshua Heschel said, “I felt my feet were praying.” I understand that feeling. Marching on Shabbat—fighting for the rights and dignity of all people—felt, to me, like the greatest way to recognize the divine spark in each of us and to recognize our holy obligation to save lives.

The march has spurred my commitment to take one action every day to combat the bigotry, hatred and life-threatening policies we are seeing in our highest levels of government: calling an elected official, writing to a news outlet that is not reporting the truth, making a donation to a critical issue, having a hard conversation with someone who doesn’t think voting matters.

At the Women’s March on Washington, Rabbi Sharon Brous said: “Our children will one day ask us: Where were you when our country was thrust into a lion’s den of demagoguery and division? We will say: I stood with love. I stood with hope. I stood with sisters and brothers of all religions and races and genders and sexualities to insist that we will emerge from the darkness and bask in the brilliance of an America that honors the infinite worth of all of God’s children.”

My Judaism is rooted in the value of justice. And I am committed to raising my children in a Jewish community and a larger world that teaches us to care for each other and see ourselves in the strangers around us. But I know that for that world to exist—for that Jewish community to be real—it is my responsibility to stand up, speak out and create the reality I want to see. 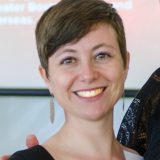 Stephanie Lowitt
Stephanie Lowitt is the assistant director of development for GLBTQ Legal Advocates & Defenders (GLAD). Her prior work includes serving as a senior development officer for Combined Jewish Philanthropies, development coordinator for Keshet, and as director of professional services at the North Shore Women’s Center. She has volunteered with numerous social justice and advocacy organizations in the Greater Boston area, including Ganei Beantown: Boston Jewish Gardens, NARAL Pro-Choice Massachusetts and the board of GLSEN MA. Stephanie earned a B.A. in psychology from Florida State University and an M.S.W. in macro social work from Boston University. When not agitating for change and raising money for worthy causes, you can probably find Stephanie gardening, reading or cooking too much food for friends and family.