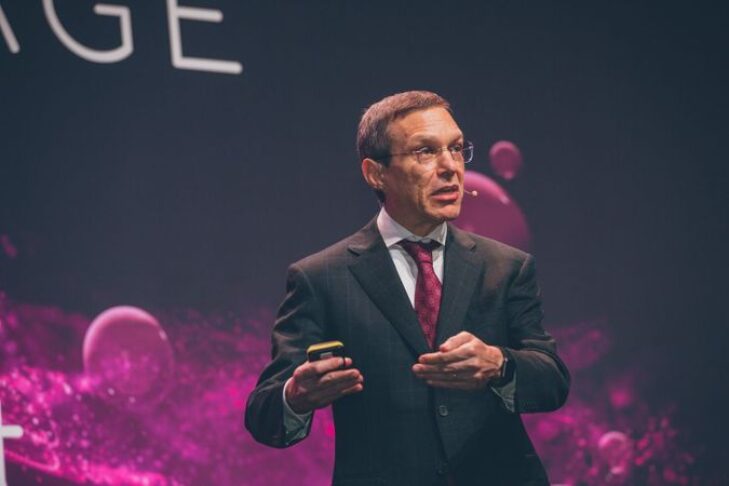 Avi Loeb (Courtesy photo)
The search for intelligent alien life began at a goat farm in Israel. Astrophysicist Avi Loeb was sitting on a barn floor hunched over his laptop devising a scientific way to search for a civilization in outer space. An answer to that age-old question: Are we alone? An Israeli Russian billionaire was ready to front him $100 million for the project—on the condition that Loeb could prepare a PowerPoint presentation ASAP.
But life, like the universe itself, works in mysterious ways. Loeb was on vacation, 6,000 miles from his office in Cambridge, at a goat farm. And, well, goat farms aren’t known for their great WiFi.
“It was 6 a.m. in the morning and I was sitting with my back against the wall looking at the newly born goats that were born just the day before, while contemplating the first trip to the nearest star. It was very surreal,” Loeb recalled during a recent Zoom call. “I’m sure that the owner of the goat farm never imagined that this would happen at that place.” 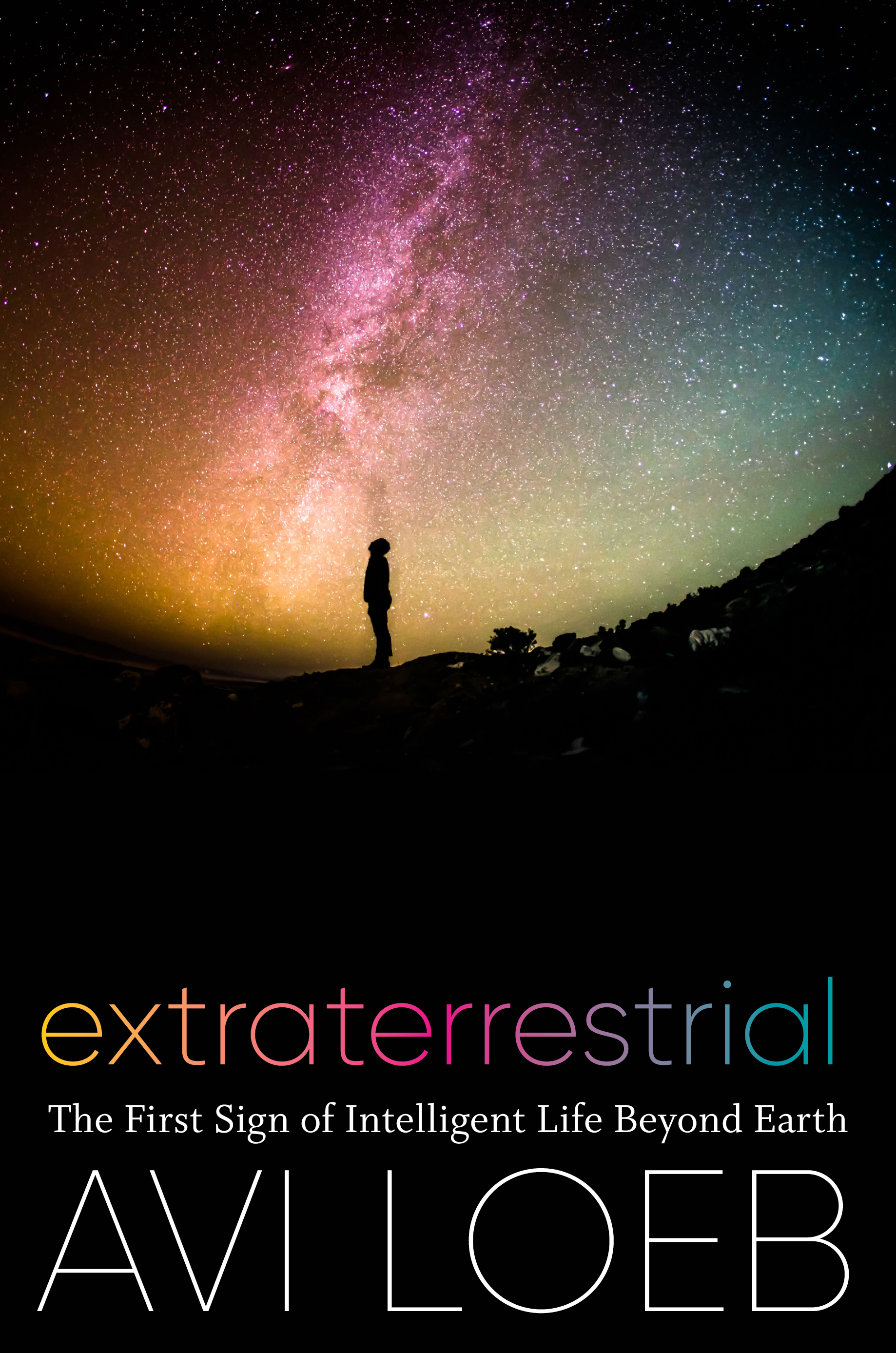 Loeb’s quixotic search for life beyond Earth is the subject of his new book, “Extraterrestrial: The First Sign of Intelligent Life Beyond Earth.” But lest you think the 59-year-old Loeb is some crackpot, tin foil hat on head, glancing up at the stars and spotting a UFO, you should know something about his bona fides. Loeb just completed his third term as chair of Harvard’s astronomy department. The author of five books and 800 scientific papers, he was named in 2012 as one of the most influential people in space by Time Magazine.

For Loeb, looking for aliens is a matter of life or death. Sooner or later, he explained, Earth will no longer be habitable. Within a billion years, the sun will boil off all the oceans. At any point in time, an asteroid could smash into our planet, killing us like it did the dinosaurs. “If we’re not careful enough, we can have a self-inflicted wound today coming from our technologies. We have all our eggs in one basket right now. If there is a catastrophe here on Earth, then we lose everything that is precious to us.”
Now imagine if we could find an intelligent life form somewhere else in the galaxy. Imagine if we could make contact, if we could say, “Hey, our planet is no longer habitable. Can we stay at your place?”
He is not alone in his beliefs. That PowerPoint he created at the goat farm? Crazy as it sounds, it did the trick. Yuri Milner, the Israeli Russian billionaire, cut his $100 million check and launched the Breakthrough Listen Initiative. With Loeb at the helm, Nobel Prize winners and some of the smartest minds in Silicon Valley came on board. The project was unveiled to the world on July 20, 2015, the 46th anniversary of the Apollo 11 moon landing. “In an infinite universe, there must be other life,” Stephen Hawking announced at the press conference. “There is no bigger question. It is time to commit to finding the answer.”

A football field in the sky 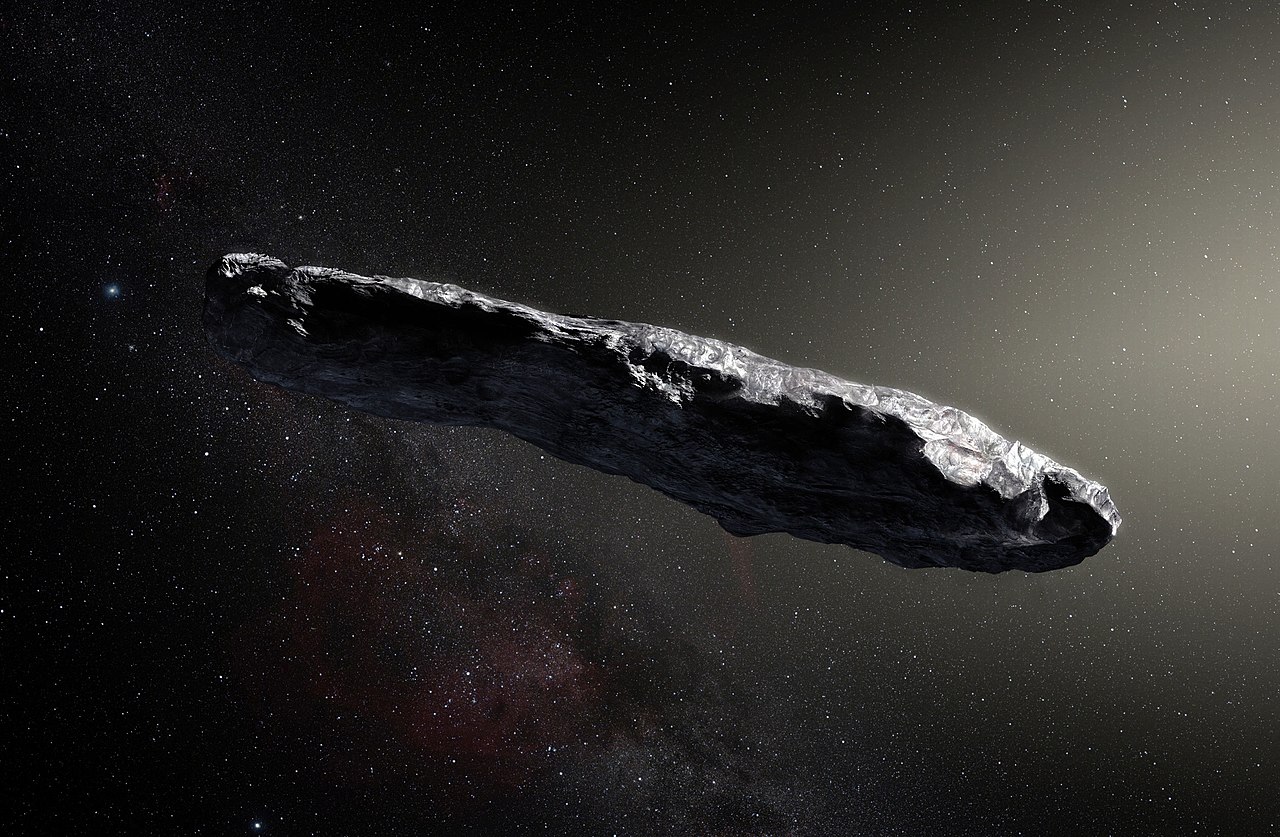 Artist’s impression of “Oumuamua,” the first known interstellar object to pass through the solar system (Illustration: ESO/M. Kornmesser)
Avi Loeb is used to having epiphanies at Israeli farms. His grandparents fled Nazi Germany before the war and emigrated to the bucolic village of Beit Hanan. Loeb was born in the winter of 1962, and was raised in the agrarian ways of his parents. His mom was a baker and his dad was Israel’s leading pecan farmer.
After school each day, when Loeb was done collecting eggs from his flock of chickens, he would drive the family’s tractor to a quiet spot on the farm and read books. “I dreamed of thinking for a living,” he said.
He wanted to become a philosopher, but didn’t know if that was an actual vocation so he studied what he thought was the next best thing: science. He received a Ph.D. in theoretical physics from Hebrew University in Jerusalem—a school that his intellectual muse, Albert Einstein, helped establish in 1923. Loeb then followed Einstein’s path to the Institute for Advanced Study at Princeton University. After spending five years there, he was eventually hired by Harvard University, where he started as an assistant professor and got tenure after only three years.
On the morning of Oct. 19, 2017, just two years after Breakthrough Listen launched, Loeb’s research got an unexpected jolt. A powerful telescope at an observatory in Hawaii spotted something strange in the sky above. It was the size of a football field.
The scientists dubbed it “Oumuamua,” the Hawaiian word for “scout,” and it’s believed to be the first interstellar object detected passing through our solar system.
Ask Loeb what he thinks the strange flying object was and he’ll tell you, in all earnestness, that it was an alien ship on a reconnaissance mission or a relic of a lost alien civilization. Indeed, he talks often about the burgeoning field of space archaeology, wondering if, in some way, he’s Indiana Jones in a lab coat.
His suppositions are not without controversy. Many scientists, even those who respect Loeb’s work in general, believe the Harvard professor is too quick to point to aliens. They think he’s an interstellar Paul Revere. “The aliens are coming! The aliens are coming!” Scientists from NASA and the European Space Agency say Oumuamua was likely just a comet. Chinese physicists believe it was a chunk that had broken off an asteroid or something that we had never seen before.
But that’s exactly the kind of thinking that gets under Loeb’s skin. “They are just saying, ‘You know what? We don’t understand this anomaly. It’s business as usual. Let’s forget about it.’ And that to me is just like a caveman witnessing a cell phone and saying, ‘You know, it’s a shiny rock that just looks like all the rocks I’ve played with until now.’”

Listening for aliens in the quietest place in America 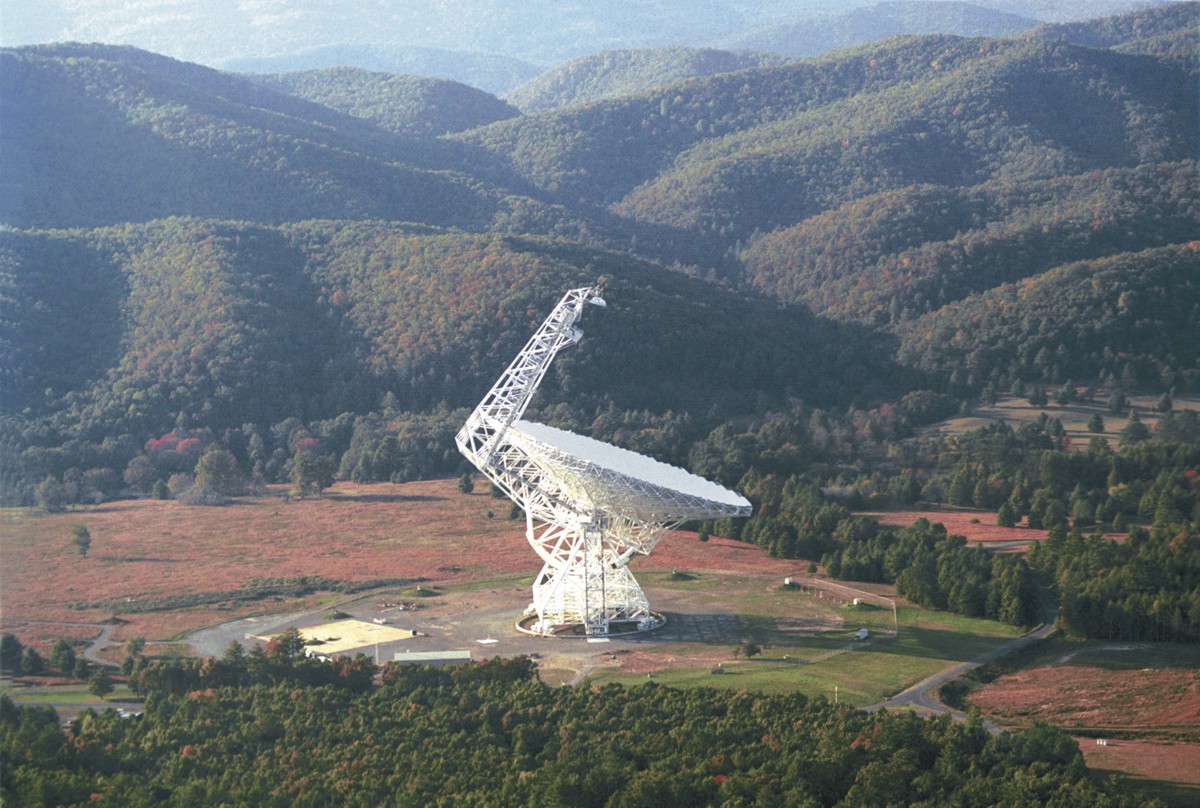 Robert C. Byrd Green Bank Radio Telescope (Courtesy photo: NRAO/AUI)
While Avi Loeb waits for the world to become a better place, he remains steadfast, listening. But to listen for aliens, one needs complete silence. Loeb and his colleagues at the Breakthrough project have found the perfect location to conduct their experiments.
In a field, tucked away amidst the valleys of the Appalachian Mountains in a small town in rural West Virginia, is the Green Bank Observatory—home to one of the largest telescopes in the world. The work they are doing is so precise that the government has dubbed the area the United States National Radio Quiet Zone. WiFi routers and Bluetooth signals are prohibited. Cell service is non-existent. Try to use a microwave and a police officer may cite you.
The scientists are listening for Fast Radio Bursts, an astronomical pulse that would reveal the existence of intelligent life. Since they began paying attention in 2015, they have already collected about a million gigabytes of information. (That would be the equivalent of storing around 60,000 Nicholas Cage movies in HD.)
Loeb hopes his new book—written for a mainstream audience—will get more people interested in the need to find a new Earth, but there’s a part of him that’s still trying to convince his fellow astrophysicists of the legitimacy of searching for aliens. To that end, he has just completed a manuscript for “Life in the Cosmos,” an 870-page science textbook about the search for extraterrestrials to be published by Harvard University Press this summer.
“I want to convince my colleagues that this subject belongs and we have the tools to address it,” he said. He remembered something he was taught during his time as a paratrooper in the Israel Defense Forces. “Sometimes a soldier has to put his body on the barbed wire so that others can pass through. And I don’t care if I don’t get likes on Twitter. I’m willing to put my body on the barbed wire so that the next generation of younger scientists will be able to discuss this subject freely.”

‘Let’s attract their attention by being better’

In the years since the Breakthrough Listen Initiative began, Avi Loeb has done a yeoman’s job explaining why the quest to find extraterrestrials is critical to humanity’s survival. But if the shoe was on the other foot, would aliens want to find us? “I don’t think that we are particularly intelligent or worthy. We are not the smartest kid on the block,” he said. “And the reason I say that is because it’s highly unlikely that out of all the random processes, that the chemical soup that exists on Earth produced the best cake possible. I think that there might be other cakes on other planets that have similar conditions to Earth that taste better, that are more intelligent than we are.”
It’s at this point in the conversation that Loeb transforms into the man he always wanted to be: a philosopher. “I think what the universe is telling us again and again, and people ignore, is that we should be modest,” he said. “Aristotle was arguing that we are the center of the universe, there are spheres around us. And that was a beautiful model. It was very flattering to us. But it was wrong. We are not at the center of anything.”
In his new book, he points to Winston Churchill who, in 1939, was writing an essay about how exciting it would be to search for life beyond our solar system. But then Churchill was drafted to become prime minister and fight the Nazis. Loeb imagined an alternative scenario where, instead of wasting resources during World War II, the citizens of Earth followed Churchill’s advice to use those same tools and technologies to explore the sky for signatures of alien civilizations.
“Humanity, at least historically, wasted most of its resources on people fighting each other on borders, territories, on ethnicity,” Loeb said. “Racism in particular is a completely ridiculous idea—that people with different skin color would have different qualities? My bottom line is, when I read the morning newspaper, I don’t get the impression that we are particularly intelligent. So why should they visit us? Let’s get better. Let’s attract their attention by being better.”
Benyamin Cohen is the news director at The Forward.
Reprinted with permission from The Forward.