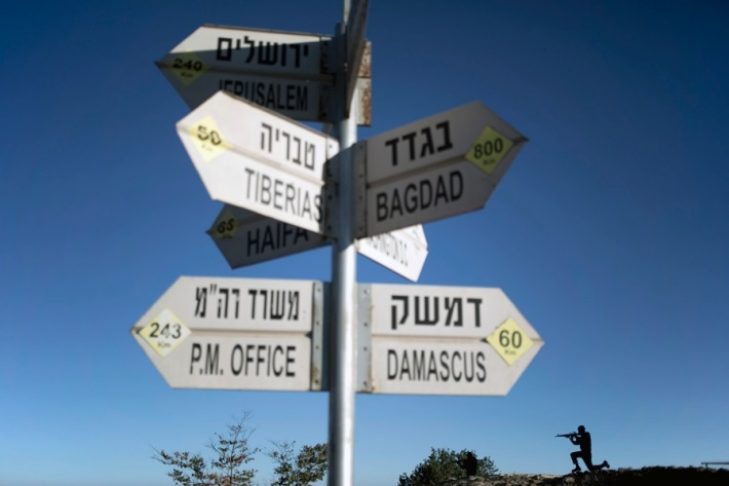 The sign on top of Mt. Bental indicating the distance from the top of the mountain to various cities

Our time in Tel Aviv was way too short, but filled with fun and sun and lots of pride in Israel. Tel Aviv feels familiar. It’s a hub of activity, building, finance, culture, fashion and more. As quiet as Jerusalem is, Tel Aviv is quite the opposite. Known as the city that never sleeps, life is non-stop in Tel Aviv. Tel Aviv is the perfect example of what can be accomplished when people set their minds to it, and the skyline of Tel Aviv is a testament to the city’s success.

Our hotel was on the beach, so many of us took advantage of the gorgeous weather to take a walk or a run, go swimming in the Mediterranean, or simply sit by the shore. It was really special to visit Independence Hall yesterday, on the eve of Israel’s Independence Day. To be in the place where Israel’s statehood was declared 69 years ago felt amazing, and to hear a recording of the first rendition of Hatikvah, Israel’s national anthem, sung after being declared a state was very moving for many of us. I couldn’t help but stare at Theodore Herzl’s image hanging on the wall thinking about how proud he would have been to see that day, and every day and year since then, come to fruition.

Herzl’s vision of a state for the Jewish people was fully realized 69 years ago, and it continues to be nothing short of a miracle. Miracles are around every corner in Israel, and it is evident in the drive of the Israeli people to innovate, excel and invent what has yet to be imagined. Israel has the highest number of start-ups per capita than any other place in the world. How proud Herzl would have been! Speaking of miracles, Israel’s 69th Independence Day (Yom Ha-Atzmaut) is one of those miracles that those who do not believe in miracles, become believers. Immediately after declaring its statehood, Israel was attacked by five Arab countries, which was known as the War of Independence. With one gun for every four fighters, with no organized army and little support from any country, Israel waged the first of many wars. One percent of its Jewish population died in that war, which was a devastating blow to the newly born country. Yet, Israel survived that war, and many others since 1948. This is the miracle of Israel.

From Independence Hall we went to the Ayalon Institute to learn about the inspiring and fascinating story of the secret, clandestine operation to produce more than 2,000,000 bullets that were to be used by the fighters in the War of Independence. Disguised as a kibbutz above ground, the secret Ayalon Institute underground manufactured the ammunition that was needed for Israel to fight the war. It was amazing to see first-hand how this was accomplished.

Yesterday afternoon had something for everyone. Some of the group toured the ancient port city of Jaffa, while others went biking, walking, swimming, or sitting at the beach. It was an afternoon of fun in the sun, taking in all that Tel Aviv has to offer as a gorgeous sea-side city.

One quick comment about Jaffa. It is 4,000 years old! You can stand in Jaffa along the water and look miles down the beach to gorgeous, beautiful Tel Aviv, with its skyscrapers standing tall. It’s crazy to be in the past, sort of, and look ahead to the present. Wow! This is the beauty and amazement of Israel!

Last night we partied like it was 1948! Fireworks, fun, and dancing and hugging people in the streets! Happy 69th birthday, Israel!

We left Tel Aviv this morning and headed north to the Golan. Talk about strategic. We visited Mt. Bental, which used to be Syria, and learned about the Six Day War. As important, we learned about why the Golan is strategically critical to Israel’s safety and security. Just over the border in Syria, we know too well what is happening in that war-torn country. It’s quite honestly a little crazy thinking Israel, which was ranked the 11th happiest country in the world (fourth year in a row!), borders one of the worst countries in the world. Needless to say, we talked a lot about politics and more. This trip to Israel has provided new perspectives and opinions to consider and new ideas to ponder about some very big world-wide problems, and humanitarian catastrophe taking place in Syria. Since standing on top of Mt. Bental, important questions are being asked and deep discussions are taking place. As Daryl said, “This trip has been eye-opening.”

We will spend a quiet night in the Golan Heights wrapping up our trip. It will be a great night to de-brief and talk about what we saw, how we feel, and what we can do with this most special experience we all shared. Tomorrow we will start the day with a boat cruise on the Kinneret, the Sea of Galilee, as we make our way to the airport for our flight home.

On our way to the airport we will tour Sfat, a beautiful artist colony and the birthplace of kabbalah, Jewish mysticism. Then we will tour the Ziv Medical Center, where sick wounded Syrians, children and adults, are treated, even though Syria is an official enemy of Israel’s. From there, if we have time, we will get a glimpse of Haifa and then enjoy a farewell dinner in the Druze Village while we learn about the secret Druze religion. And, finally, to the airport for our flight home.

What happens next will be up to every participant in PJ Library Parents to Israel. It’s been a whirlwind week. I can see changes have taken place in individuals that will change our community that will change Israel. Participants have been posting on their Facebook, sharing their experiences and pictures, which are helping to tell Israel’s story. PJ Library Parents to Israel is already having a positive effect on Israel’s image.

I know your moms and dads, sons and daughters, brothers and sisters, and friends are excited to see all of you and share with you the amazing experience they had in Israel. It was an honor and a pleasure for me to share this experience with them. I thank all of you for “holding down the forts” for your loved ones to participate on this adventure. I am confident it is one they will cherish for a lifetime.

With love from the north of Israel by the beautiful shores of the Kinerret (Sea of Galilee) as the sun is setting.