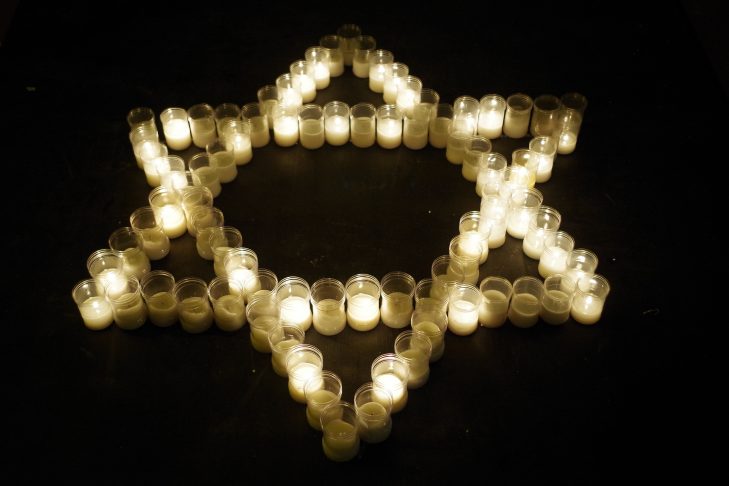 A week ago, last Shabbat morning, Lori Gilbert Kaye died at a synagogue in Poway, California, as she protected the rabbi from a white supremacist’s bullet. The tragedy happened during the Yizkor service—a time when Jews publicly memorialize their dead. The word “Yizkor” is rooted in the Hebrew imperative “to remember”—zachor. Like many of Judaism’s rituals, Yizkor is a powerful, communal and spiritual experience. Lori Gilbert Kaye had gone to synagogue to be with others to zachor, to remember, her mother by saying the Kaddish—the prayer of mourning.

I said the Kaddish for the first time 17 years ago when my father died. The night before he was buried, I lay on a twin bed in the pink-shag, poster-plastered bedroom of my girlhood. I paged through the tattered prayer book from which I had prayed as a young girl. It was small and square with phyllo-thin pages, the kind of book I had seen women holding at the Western Wall, the kotel, in Jerusalem.

The prayer book contained line after line of tiny Hebrew letters that I could no longer read fluently. I stumbled through the chewy Aramaic—a language written in letters of the Hebrew alphabet. Jewish tradition requires a child to say the Kaddish for a parent every day for 11 months. The idea of confronting grief and sorting through memories for a stretch of time held some appeal for me. “You are not required to do the task,” says the Talmud, “but neither are you free to desist from it.”

Throughout the various levels of Judaism I had practiced in my lifetime, that Talmudic maxim hovered over my hyphenated identities as a Cuban American, American Jew, Cuban Jew (Jubana), Sephardic Ashkenazic, Yiddish Ladino-knowing Jew. But the more I thought about saying the Kaddish for my father, even if only for 30 days and not the full 11 months, was a daunting thought. I wasn’t sure I had the stamina for daily prayer. Was I enough of a believer to say the Kaddish, an extended valentine, to a God who had taken my father from me? Even a month felt overreaching.

As I flipped through my old prayer book, the fairytale quality of reciting the Kaddish every day was fascinating to me. The fantasy and lore of Kaddish brought me back to the magical thinking with which I navigated the shoals of childhood and my high school years. I had heard that the more I said the prayer, the closer my father was to reaching heaven. There was also a feeling bubbling up inside me that I needed to recite the daily prayer of remembrance to bring my father back to me, to somehow speak with him though he was no longer alive. The Kaddish I planned to say would be based as much on grief as it was on unfinished business.

In Judaism, there is another tenet that if one does a good deed enough times, the feeling of satisfaction will eventually come. I resolved to say Kaddish for my father for 30 days. By the end of that first month, I was a regular among the mourners at the evening minyan at my temple and had begun to master the words of the prayer. I watched sunsets through the chapel’s domed skylight—not only watching day turn into night, but, as Jewish law dictates, I witnessed the sun go down to bring forward a new calendar day. There was renewal in darkness. The daily event had a way of pulling me in, creating a structure for engaging with my father. I decided to sign on for the full 11 months.

Poway, Sri Lanka, Pittsburgh, New Zealand, Charleston. White supremacists and terrorists transformed their houses of worship into killing fields. I now say the Kaddish for those victims as well. At my temple, doors that were once opened now require a fob to unlock them. There is a police officer posted outside and a guard pacing inside the building. All of these measures are done in the name of security, necessity and, dare I say, fear. However, when we say the Kaddish as a community, we are brave. We remember, and we sanctify what we have lost in the wake of these tragedies.

Three-thousand miles and three time zones away, I cried for my father during my temple’s Yizkor service. The woman next to me mourned her son. My husband’s Kaddish was for his father. And so it went, row after row, remembering parents, spouses or children—close relatives for whom the Kaddish is recited. When my service ended with the prayer of mourning, Lori Gilbert Kaye was still alive on the West Coast.