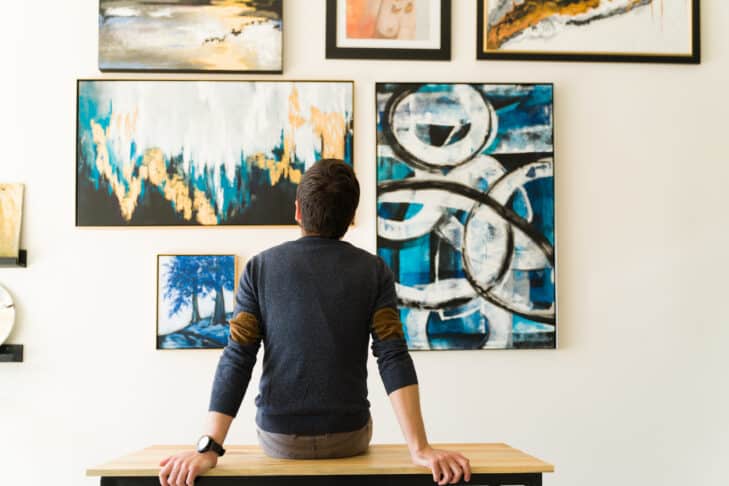 First, consider this portmanteau: Kolture—a mashup of the Hebrew word for voice (kol) and “ture,” the end of the word “culture.” Kolture is the name of the Jewish Arts Collaborative’s (JArts) new portal for all things Jewish plus cultural. It covers books, theater and art performances, visual art including films and documentaries and everything in between. The platform debuted its Beta version in early November with over 120 curated pieces. Three to four pieces are added weekly and JArts is soliciting user feedback to continue to build a more accessible platform.

Kolture has been gestating since the founding of JArts seven years ago. The organization’s executive director, Laura Mandel, recently told JewishBoston that “one of our brilliant board members, Jerry Slavet, was coaxing us into developing a digital strategy. Then the pandemic happened, and Jerry said we had to seize the moment for rolling out that strategy.”

Mandel and Slavet planned Kolture, believing it would continue to be relevant in a post-pandemic world. Their gauge was the popularity of JArts programming and art performances. They capitalized on the successes of both things, aiming to create Kolture as a cultural destination Mandel described as “the best in Jewish life and art that is highly and beautifully curated. This is different than googling a topic. We go further and tell Jewish stories from well-created art.”

Sarah Dauer, an artist and poet, was hired last summer as Kolture’s editor, bringing a wealth of knowledge about Jewish literature and arts. She seamlessly executed Mandel and Slavet’s vision and notably contributed to it. With Dauer at the helm, she and Mandel recognized that, online, Kolture could reach national and international audiences.

In an interview with JewishBoston, Dauer observed: “I’ve been thinking about how Jewishness has this collective experience, whether it is through antisemitism, resilience or cultural connections. Resilience is a common theme throughout our curated work. However, we also have this opportunity to explore a wide range of diversity within a Jewish framework. It’s something JArts does on an organizational level, and now we have the Kolture platform to expand what we do.”

For Mandel, one of the salient features of the new website is how it traverses geography. “It doesn’t matter where you are in the world to access the platform. Similarly, it doesn’t matter where artists and performers are based,” she said. “As a result, people from all over the country have approached us, wanting Jewish arts and culture resources. Now we can share those resources with the click of a button.”

Another innovation particular to Kolture is to call contributors “curators.” Dauer noted that the definition of curator has been expanded from “selecting work from a particular genre in which curators have expertise in presenting a point of view we believe should be shared with our audiences.”

“Several of our curators are actually curators in museums or directors of organizations where curation is part of their daily work,” she explained. “All our curators bring an understanding to the deep complexity of a given work or subject. They understand the audience and their communities because they are also in those communities and understand them.”

The idea of community underscores Kolture’s work. Mandel pointed to the recent interactive exhibition, “Be the Change,” one of JArts’ most ambitious public art projects. A group of six Boston-based mixed media artists incorporated social justice themes into original art created for the exhibition. LGBTQ, domestic abuse, antisemitism, bigotry and gun violence were among the subjects explored in the exhibition, which was on display in Boston’s Fenway neighborhood in October. Each piece of art had a QR code for people to learn about resources related to the cause and the artists who created the pieces.

“’Be the Change’ was created, in part, as a tool to connect people and forge community,” said Mandel. “Many Jewish leaders understood the possibility of such connections but needed a tool or ready access to content. ‘Be the Change’ addressed that problem. I see Kolture serving the same purpose on a broader scale. For example, Kolture reaches people in places that don’t have Jewish culture nearby.”

Another way Kolture establishes community is with the three questions at the end of each entry on the site, prompts intended to spark conversations. “These conversations make Kolture a community space,” Mandel explained. We are encouraging partners to use Kolture’s rich material as the basis for their programming, whether virtual or in-person.”

Dauer added that Kolture is also a space inspired by the spirit of “‘Be the Change,’ which brought communities together to enact social justice. At the same time, we also recognize that people come to Jewishness and Jewish culture on their terms.”

Kolture also features Jewish holiday content and will have pieces dedicated to Hanukkah in December. Content on Jewish mysticism will be featured in January, in anticipation of JArts’ new project, “The Secrets of Tarot: A New Augmented Reality Look at the Torah in the Tarot Cards.” Dauer added that future themes will include environmental justice for Tu BiShvat, Black History Month (in which JPOC artists will be highlighted), Purim, Women’s history and feminism.

JArts is moving in new and exciting directions. “We need to be the curators of Jewish life through its art,” Mandel said, “whether that speaks to us now or honors Judaism’s longstanding diversity that is still underrepresented across the Jewish world historically. We can tell those stories of diversity through art in a very curated way.”

Dauer added, “Jewish art often makes something considered old into something new. Exploring art in a new way is very much in our Jewish DNA.”