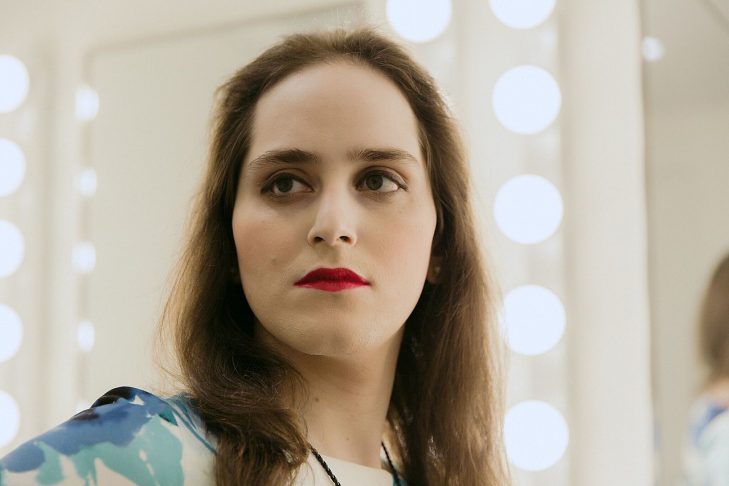 Abby Stein is eager to tell the “exotic” part of her story up front. “It lets me go on and focus on important things like LGBT issues,” said the 26-year-old transgender activist, author and ordained rabbi. Stein may also very well be the first Hasidic man to come out as a transgender woman. She was in Boston last week to serve as a scholar-in-residence for the day at Hebrew SeniorLife (HSL). As part of her visit, Stein met with chaplaincy interns, staff and residents, and gave a public presentation that included her autobiography, a brief history of Hasidism and the work still needed to be done on behalf of LGBTQ Jews and others. “It’s important to tell my story and mobilize logistical support,” she told JewishBoston.

Abby Stein began her life as a boy. The sixth of 13 children, her family traces its rabbinic lineage back to the Baal Shem Tov. Stein was born in the Williamsburg section of Brooklyn and educated within the strict boundaries of Hasidism and ultra-Orthodoxy. “I learned English when I was 20,” she noted. “And it was my fourth language after Hebrew, Yiddish and Aramaic.”

These days she puts her rigorous Jewish education to use in the service of studying gender and Judaism. Many of her source sheets on the subject can be found on Sefaria, an archive of Jewish texts. On the site, Stein starts from the beginning and has published source materials she has gathered on “The Genesis of (Trans)Gender.” She cites a reference in the Mishnah that asserts that Adam, the first man, “was created as both genders.”

In her presentation, Stein began dramatically: “‘Women are worth so much less than men. And do you think this is OK with Judaism?’ That is what my father said to me when I came out to him.” While her father’s reaction may be predictable, it nevertheless still stings Stein, who has not been in touch with her parents for over two years. According to her, even the most supportive parents don’t always get it right either. “When a teen comes out to their parents, the response shouldn’t just be, ‘We still love you,’” she said. “The response should be, ‘That’s amazing; let’s have a party!’”

Stein’s presentation, and even her interview with JewishBoston, was celebratory. At one point in our interview, she exclaimed: “I’m so in love with Jewish food! I love making challah. It’s beautiful.” “Beautiful” is a word Stein uses a lot, including when she discusses her former Hasidic community.

As for her own practice of Judaism, she observes rituals from her Hasidic community that still speak to her. “I haven’t missed a candle-lighting in the last three years,” she said. “I don’t believe in God, but I believe in Judaism.” Labels don’t appeal to her either. She is a member of Romemu, a community in New York City that she described as Jewish Renewal in observance. “My Jewish and spiritual practices boil down to cherry-picking,” she said. “Not only is this OK, it’s beautiful. What works for people takes on different forms, and we need to adjust rituals to survive.”

Shabbat still provides structure in Stein’s life. “The week has ended and Shabbat is coming,” she said. “I take a break from daily life. That’s a powerful spiritual and psychological message for me.”

After leaving the Hasidic community, Footsteps, an organization that helps ultra-Orthodox Jews transition from their communities to general society, was a source of support for Stein. “Footsteps was lifesaving for me,” she said. “It helped me in so many ways. I went to them as an immigrant in my own country.” Stein attended ESL classes and then received her high school equivalency. She interned at Manhattan’s Jewish Community Center and is now studying public policy at Columbia University.

Part of Stein’s presentation includes a video of her bat mitzvah and name change ritual at Romemu. She told her HSL audience, “You can be transgender and celebrate it in a very beautiful way.” For Stein, that meant receiving a new name by which she is known in the Jewish community. “Ritual in general should be joyous, and I was able to take joy from that ritual,” she added.

Stein also noted that one of her goals is moving from tolerance to celebration for the LGBTQ movement. “I want to create a space where we are not just tolerated, but accepted,” she said. “And where being gay and trans is beautiful. People being who they are is beautiful. Coming out is a beautiful, spiritual thing.”

Stein is optimistic about the future. She sees a lot of hope for the Modern Orthodox community. “It’s unacceptable now for a modern Orthodox rabbi to stand on a pulpit and say homophobic and transphobic things,” she noted. “The younger generations are tolerant and even celebrating LGBT people. But we can always improve on things there.”

Similarly, Stein hopes that elderly people who have been out “don’t crawl back in the closet. I’ve met with the HSL staff, and staying out here is very hopeful. As my rabbi, the late Zalman Schachter-Shalomi, said, ‘Aging is saging.’ That’s a strong message to send out to people. We see the power of our elders being open to life and having lived through experiences we’re living through now.”

Ending on a note of bittersweetness, Stein asserted she will have achieved her ultimate goal when the Hasidic community openly hates transgender people. “If they hate me, that means they acknowledge that I exist, and that is very important,” she said.