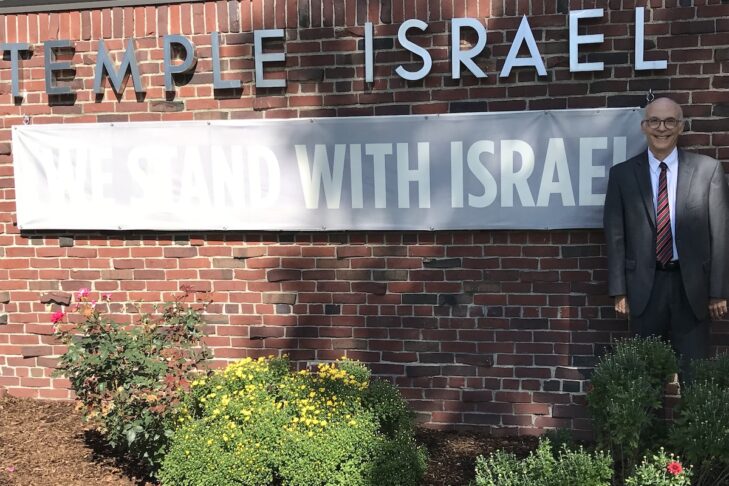 Rabbi Klatzker at Temple Israel of Natick in 2021 (Courtesy photo)

On Aug. 1, Rabbi David Klatzker began his term as transitional senior rabbi at Temple Israel of Natick. For some long-time members at the temple, this was a homecoming. Rabbi Klatzker’s first experience at Temple Israel was serving as associate rabbi from 1983-1985 under Rabbi Harold Kushner (now rabbi laureate). “It was a wonderful experience,” Rabbi Klatzker recalled in an interview. “I learned a lot from Rabbi Kushner.”

Rabbi Klatzker arrived as Rabbi Daniel Liben retired after 30 years at the congregation. As temple members contemplate the hiring of a permanent rabbi, they are pleased to have Rabbi Klatzker on the job. In his paper “Reflections of a Transitional Rabbi,” available on LinkedIn, Rabbi Klatzker wrote: “A transitional rabbi…has served as a settled rabbi in one or more congregations and also has experience in interim settings…. He fills the important role of stepping in when change is called for, reviewing the dynamics of the synagogue, ironing out dissonances…and bringing groups together in collaboration with a renewed sense of mission.” Rabbi Klatzker’s stay at Temple Israel will last approximately one year.

“This is a time to take a close look at how the congregation operates, as well as its primary goals and vision for the future,” said Rabbi Klatzker. Along with guiding a smooth transition to the next rabbi, Rabbi Klatzker will lead services, provide counseling, officiate at weddings, funerals and baby-namings, in addition to teaching. He has already begun teaching a class, “Digging Deeper into the High Holy Days,” along with the temple’s Rav-Hazzan Ken Richmond. 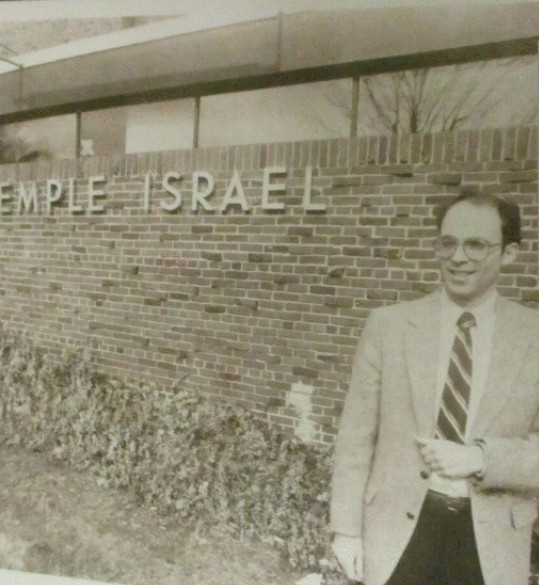 Rabbi Klatzker at Temple Israel of Natick in 1983 (Courtesy photo)

Rabbi Klatzker, a native of Los Angeles, received his B.A. from Pomona College, Phi Beta Kappa; his M.A. and Ph.D. in religion from Temple University; and an honorary doctor of divinity from the Jewish Theological Seminary in New York. “At the seminary I discovered that I liked the role of rabbi,” recalled Rabbi Klatzker, “and I enjoyed working in a congregation.” He also did graduate work in Jewish history at Hebrew University in Jerusalem, in addition to studying pastoral psychology at the Philadelphia Psychiatric Center and Jewish Family Education at the Whizin Institute in Los Angeles.

Rabbi Klatzker served for 10 years in Erdenheim, Pennsylvania, and a 13-year stint at Temple Ner Tamid in Peabody. As he contemplated his next step after serving several congregations, a friend told him about the Interim Ministry Network (IMN), which had been training transitional clergy for 30 years. He went on to become accredited as a transition specialist upon completion of the IMN two-year training program. “At the IMN, rabbis train alongside pastors and priests,” Rabbi Klatzker explained. “People are people; churches are not that different from synagogues.” He has served as a transitional rabbi in Long Beach, California, Commack, New York, Woodcliff Lake, New Jersey, Cranford, New Jersey, Long Grove, Illinois, and, most recently, Scottsdale, Arizona.

Rabbi Klatzker took two years off to care for his wife, Randy, who died of ALS (Lou Gehrig’s disease) in April 2020. The couple was married for 36 years and had three children: Micah, Judah and Meira. His daughter teaches in Boston, and both sons are involved in the film industry in California. He described his wife as being “tremendously supportive.” She was, he explained, a “recovering attorney” who went back to school to get a master’s in Jewish education from Hebrew College in Newton. She taught at Cohen Hillel Academy in Marblehead and served as education director at her husband’s synagogue in California.

Rabbi Klatzker has observed over the years that “after a loss, many people manage to get along with their lives, but often with a sense of resignation or quiet defeat. When asked about the person who died, they will not say much in response. But people who deal with loss in a positive way will sometimes smile and talk about their loved ones with happiness.” He said this was the way he dealt with the loss of his beloved wife. “It allowed me to access all the good feelings I had during our relationship.”

Rabbi Klatzker’s friends knew he needed to feel useful after his wife’s death. He was encouraged to take the transitional job in Scottsdale, at a congregation whose members were also grieving. Their rabbi, Micah Caplan, died suddenly at 44. “Because of COVID difficulties, their grief was intensified by an entire year without an oneg [a gathering after services where temple members socialize],” said Rabbi Klatzker. “People want community, even if it’s through Zoom. Whenever a rabbi leaves a congregation for any reason, there are people who are going to be grieving. I wanted to help the congregation grieve—in a positive way.” During his 10-month tenure in Arizona, Rabbi Klatzker coached the search committee through the process of hiring a new rabbi.

An accomplished writer, Rabbi Klatzker has published articles in seven books and in journals including Conservative Judaism, The Reconstructionist, Middle East Quarterly, Jewish Political Studies Review, Journal of Ecumenical Studies, Catholic Historical Review and Union Seminary Quarterly Review. He also published articles through his involvement with Hebrew University of Jerusalem’s America-Holy Land Project as liaison in the U.S. His work focused on travel accounts from the 19th century, including those of Mark Twain and H.L. Mencken.

Rabbi Klatzker also served as co-chairman of the Philadelphia Conservative Introduction to Judaism program and as chairman of the Interfaith Outreach Committee of the Robert I. Lappin Foundation in Salem. He was a senior teacher at Camp Ramah in the Poconos for many summers and also served as rabbinic advisor to the New England Region of the Federation of Jewish Men’s Clubs.

Asked about challenges for the American Jewish community, he responded, “In my personal view, lots of America’s Jews don’t appreciate metaphor. They see life through a strictly scientific lens. They tend to take biblical language literally, and so they reject it. It’s the rabbi’s job to open up the meaning of sacred texts.” He added, “We need to pay more attention to Jewish education and adult Jewish education. Me’ah [a popular two-year adult education program offered by Hebrew College] was one reason Randy went on to get her master’s.”

“A consulting rabbi,” wrote Rabbi Klatzker, “… can help the congregation travel successfully through the wilderness period of uncertainty and ambiguity that is inevitable whenever there is a rabbinic transition, so that it can start again with new energy, a new sense of purpose, and a new image of itself.”