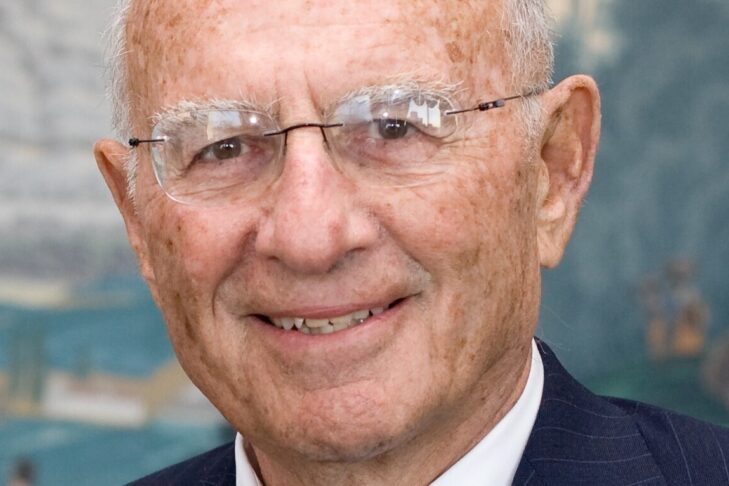 “He believed in the validity and in the power of community—the Jewish community and the general community. That was central to him, his foundation, his children, and his grandchildren,” said Shrage, former CJP president and CEO. “Dick wasn’t interested in personal glory. He was interested in what needed to be done to sustain the community over the long term.”

Known as a “captain of industry and a leading light in philanthropy,” Richard Alan (Dick) Smith died peacefully on Sept. 9 in his Chestnut Hill home surrounded by family. He was 95.

Guided by a philosophy of engaged philanthropy, Smith led by example and gave generously of both his valuable time and financial capacity, leaving the Jewish community, the city of Boston, and his family an extraordinary legacy.

Among Smith’s proudest accomplishments is the family foundation he and his wife created and which his children, grandchildren, and their families now steward—the Richard and Susan Smith Family Foundation. Today, multiple generations work together on the Foundation board, along with its professional staff, to guide its strategy and grant-making.

The Foundation has always made Jewish giving a priority. Since 1970, the Foundation and the Smith family have invested a combined $45.6 million in Boston’s Jewish community, with $24 million being allocated to CJP.

“Because of our Jewish heritage,” Smith said in a letter to his descendants, “we expect Combined Jewish Philanthropies, or another appropriate Jewish philanthropic vehicle, to be a permanent core part of the Foundation’s giving.”

At CJP, the Foundation’s partnership has been key to continued organizational evolution and systemic change. Its critical investments have been instrumental in developing and growing several CJP programs, including the groundbreaking Anti-Poverty Initiative, Shiluvim and Netivim (to support Ethiopian Jews in Israel), IACT (Inspired Active Committed Transformed) to engage Jewish students on college campuses, Strategic Israel Engagement, and post-Birthright internships in Israel.

In addition to his involvement with CJP, Smith was passionately devoted to other organizations that serve the Jewish community, including Facing History and Ourselves, Temple Israel, American Israel Public Affairs Committee (AIPAC), and Hebrew SeniorLife, as well as several longstanding Boston institutions, such as the Dana-Farber Cancer Institute, Boston Symphony Orchestra, Joslin Diabetes Center, and Harvard University.

“The impact Dick and his family have had on CJP, our Jewish community, and Greater Boston is extraordinary,” said Rabbi Marc Baker, CJP president and CEO. “While we have lost a giant of a leader and philanthropist, we are honored to remember and celebrate his life and legacy. And we are grateful to his family that Dick’s legacy does live on and his impact will continue to be felt through their generosity and their leadership for generations to come.”

Smith came from a family that deeply valued philanthropy and supporting Boston’s Jewish community. His father, Philip Smith, who, upon achieving success in business, became one of the fathers of Jewish philanthropy in Boston in the 1940s. At that time, Philip Smith joined CJP in its work to aid immigrants, resettle refugees, and help to establish the State of Israel. Richard Smith’s father-in-law, Leo Flax, served as president of Hebrew Teachers College from 1962-1964.

When Philip Smith died, Richard Smith stepped up to become a leader in Boston’s Jewish community. He was instrumental in hiring Shrage as president of CJP in 1987, served on CJP’s Board of Directors and Overseers, and helped guide CJP and Beth Israel Deaconess Medical Center’s investments as chair of the Board of Managers.

“Dick was larger than life, a bedrock of the community who rallied other people around him,” said Shrage. “He was always there for us, with support and participation and resources. You can see the mark he left from generation to generation.”

The multigenerational passing of the baton in the Smith family has continued. When Richard Smith left the CJP Board of Directors in 2006, his daughter, Amy Smith Berylson, joined the board and has served ever since, currently in the role of board secretary. Several of Richard Smith’s grandchildren and their spouses also have served on CJP committees, and family members through the fifth generation are active in Boston’s Jewish life.

“At the last Foundation meeting my father attended in person, we reviewed our family’s multi-generational legacy of giving to our Boston Jewish community,” said Amy Berylson. “He was so proud to see that my siblings and me, and our children, are fully and enthusiastically committed to continuing the work that he, my mother, and their parents started. This is personally one of my highest philanthropic priorities, not only to honor my parents’ and grandparents’ legacy, but because the work itself is critical to perpetuating our historically significant Boston Jewish community and its impact on the world beyond.”

Smith was a savvy and successful businessman, growing the nation’s first shopping center theater into the country’s largest chain of movie theaters, with more than 400 locations and 1,200 screens. In the 1960s, Smith made a series of “transformational” investments, building what ultimately became three NYSE public companies: General Cinema Corp, Neiman Marcus Group, and Harcourt General.

Richard Smith is survived by his three children and spouses, Amy Berylson and John Berylson, Robert A. Smith and Dana Smith, and Debra Smith Knez; eight grandchildren; six great-grandchildren; a sister, and many nieces and nephews. He was predeceased by his devoted wife of 63 years, Susan Flax Smith, in 2016, and son James A. Smith in 1970.