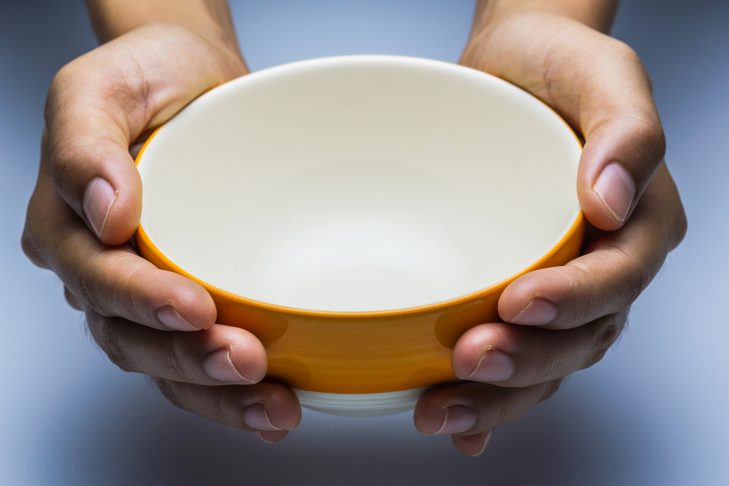 I recently asked my Facebook friends what words come to mind when you think of Thanksgiving; I had intended to create a word cloud. I got some interesting answers. A few people said “stuffed” in all its permutations. Traffic, airports, football, tension, Native Americans, colonialism, family dysfunction and exhaustion. Gratitude, pumpkin, turkey, togetherness and many favorite foods also popped up. The answers were a mix of nostalgia, social justice issues and family tensions. Thank goodness, not one person said “hunger.” Given that 40 million Americans are struggling with hunger in the United States, my sample was small and skewed.

Two Jewish organizations—Nazun and Mazon—are focused on ending hunger. Nazun, formerly Challah for Hunger, has mobilized college students and the general community to be a voice for those who struggle with hunger. Nazun means “to nourish” in Hebrew. The organization was founded in 2004 at Scripps College in California, shining a spotlight on the issue of hunger with workshops that taught participants to bake and braid challahs, which were then sold for fundraising. The workshops grew with the organization. Today there are 65 Nazun chapters on campuses in 24 states. Their work has also expanded into the general community, engaging people of all ages.

Rabbi Lily Solochek, Nazun’s director of programs and education, explained to JewishBoston that the nonprofit’s work rests on three pillars: advocacy, community and philanthropy. Most student chapters have an advocacy chair responsible for assessing the needs of their respective campuses and staking out what hunger looks like in their colleges. There are Nazun chapters throughout the Boston area, including Tufts, MIT, Boston University, Northeastern and Harvard. Solochek also noted that community programs, such as the signature challah bake, also take place at Jewish community centers and Moishe Houses, encouraging families, young adults, day school students and others to participate. Half of the organization’s philanthropy is donated to its primary partner, Swipe Out Hunger. Swipe Out Hunger helps students to donate “swipes” from their meal plans to fellow students in need. Additionally, through Swipe Out Hunger, Nazun also contributes to the coffers of local and campus food pantries, food banks and other anti-hunger organizations.

“Our community can play out in different ways,” said Solochek. “For example, our students can get together once a month, once a semester or once a year. Some of our students access us through Hillel, while others are not Jewish. For those students, it is often their first time participating in a Jewish space—seeing that space as a place where we share food and advocate for people. It shows them we have these values built around making the world a better place.”

This past year, Nazun initiated a campaign called #FUELHigherEd for “fundamental, universal, equitable, long-term state and federal solutions to campus hunger” (FUEL). Solochek describes the project as the culmination of Nazun’s three pillars, and an integral part of the organization’s advocacy work. “FUEL is about making long-term change. We are interested in feeding people now, and we want to make sure that students are not suffering from food insecurity. We have a group of organizations that work with us as part of the #FUELHigherEd campaign to promote our work, to host their own bakes and join us in advocacy work for those longer-term solutions.”

Additionally, Solochek has created Nazun’s b’nei mitzvah curriculum. The goal is to inspire young teens to take on service projects as part of their experience and ask themselves: “What does my community need? What are other young activists’ stories? Who are my peers, and how can I inspire my friends to do more?”

The late activist-writer, Leonard “Leibel” Fein, founded Mazon—“sustenance” in Hebrew—in 1986 as one of the first faith-based organizations to address hunger in the United States. What began as a grassroots effort—initially raising just over $160,000—is now an organization operating with a budget of over eight million dollars. In Fein’s brief history of the organization, he observed: “Mazon begins the work of building community. It joins Jews to one another through language and through works; it joins those who have to those who want through acts of kindness.”

Mazon’s president and CEO, Abby Leibman, recently told JewishBoston that the core of Mazon’s mandate is “to mobilize the Jewish community, to be a voice for those who struggle with hunger, to lift them up. This is why we do advocacy work; it is what advocacy work is all about. Advocacy is lending your voice to those who either don’t have access, fear retribution or cannot find the work they need.”

For Leibman, the goals of Mazon’s advocacy are reflected in the organization’s tagline, “A Jewish Response to Hunger.” Leibman pointed out that the phrase is “not a response to Jewish hunger. Mazon’s work is about ending hunger for everyone in the U.S. and Israel. But that work means we are advocating for and helping people of all faiths and backgrounds. And we are doing it through a unique lens grounded in Jewish values, ideals and teachings. When the Torah discusses caring for others, it usually leads with feeding.”

Shortly after Leibman arrived at Mazon in 2011, she attended a large national anti-hunger policy meeting and sat in on a panel about hunger among military families. Attendance in the room was sparse, but Leibman immediately understood the issue’s importance and the need for Mazon to put it on its agenda. “We decided there are populations in this country, military families among them, that have unique needs when it comes to their struggles with hunger and how those struggles are addressed.”

Also high on the list of Mazon’s priorities is caring for LGBTQ seniors. Leibman noted that major organization such as AARP and Meals on Wheels cater to the general senior population. “Yet for those who are aging into long-term chronic illness and disabilities because they have HIV or AIDS, they have limited options for support. They grew up in a time where they not only faced blatant discrimination but legal discrimination. And we all know what happened in the military.”

To highlight the ongoing problem of hunger in America, Mazon is launching a virtual Hunger Museum in December, tracing the history of hunger in the U.S. from the Gilded Age to the present. It will also feature the government’s response to hunger in various eras.

“We almost ended hunger in this country in the 1960s and ’70s. Then there was a shift in who our policymakers were and where their priorities lay. So, we need to learn from our history,” Leibman said. “We Jews are a people who experience and live our history over and over. We are the People of the Book, always teaching and learning. The virtual museum is a tool to do those things.”

I abandoned my half-baked idea (pun intended) of creating a Thanksgiving word cloud. Instead, I asked Solochek and Leibman what people can do during the holiday season to help end hunger. Here are their suggestions:

And I’ll suggest one too. Contemplate the Hebrew word Hineini—”Here I am.” Say it out loud to feel the potential power of your singular presence; listen for your still, small voice. And then consider: if still, small voices speak in unison, they will amplify social justice concerns. This Thanksgiving let’s communicate the message that hunger is unacceptable in our country and the world.

Here we are. Our presence is vital.