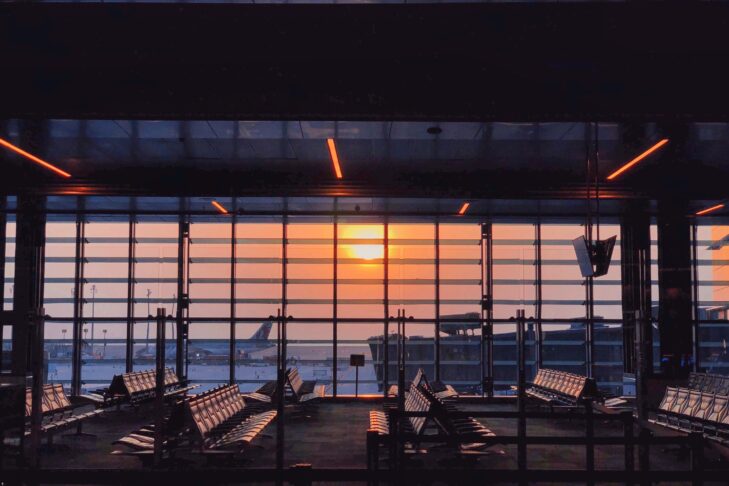 I have never considered myself a big traveler, but this year, as I am going to school in Boston and working as an intern at Congregation Beit Simchat Torah in New York City, I have found myself in transit more often than not.

While I have tried multiple different modes for getting to New York, I have ultimately decided that the one that works best for me is flying. This means I have spent an unusual amount of time this past year in airports, and have come to develop strong opinions that I often extol to classmates and colleagues. For example, I prefer flying into JFK or Newark. I do not like LaGuardia. I also have strong (negative) feelings about the JetBlue terminal at Logan. And, in my opinion, there should be more Starbucks everywhere.

But my biggest takeaway from my year spent in airport terminals is that, for some reason, I inextricably love them. There is something soothing about making it through security and knowing that from that point until your plane takes off you are exactly where you need to be. If you get to the airport with enough time to drink (hopefully a Starbucks) coffee, or to read a book, or to peruse the airport bookstore, it feels like a tiny stolen moment of luxury during an otherwise chaotic and unpredictable time. Airports are the very definition of a liminal space—a space where everyone is between destinations, either arriving or departing, waiting in a sort of “holding time,” a place where the rules begin to fray, and everything in the outside world begins to melt away.

There’s a Celtic saying that I love: “Heaven and Earth are only three feet apart, but in the thin places that distance is even smaller.” The airport, a place where we are literally between heaven and earth, feels like one such thin place. The mishkan, a portable sanctuary that accompanies the Israelites through the desert—built specifically to be a dwelling place for the heavenly Divine on earth—feels like another thin space.

One characteristic of these “thin” spaces is that they are meant to be places where you can be completely yourself, where nothing outside of you matters. And while “thin” spaces like this can feel disorienting, as airports often do, they also provide, for a brief time, a space where you can focus on what you need, what you desire, what is in your heart. So it is no wonder that in Parashat Vayakhel, which focuses on details involved in building the mishkan, we learn that the work of building it requires each and every person to pour their whole self into it.

Take from among you gifts to יהוה; everyone whose heart is so moved shall bring them—gifts for יהוה:

And the result is immediate; a deluge of offerings from everyone in the congregation, of gifts of all kinds. For essentially the entire parsha, the people of Israel, along with Betzalel and Oholiav, the specifically-appointed craftsmen, craft and construct the mishkan with the work of their hands and the gifts of their hearts. They do this until, the text tells us, the Israelites start bringing too much, more than is necessary, and they need to be issued a command to stop. Their desire to keep going indicates that they don’t just want a mishkan, they desperately need one. They need a place where they can be wholly themselves, a place where the stressors of the desert and their extended wandering toward Israel can feel like background noise; they need a “thin” space of their own.

But the building of the mishkan is not without its own stress. Back in Exodus 25:9, when Moses is being given instructions for the mishkan from God, God says:

In a midrash on this verse, Rabbeinu Bahya writes that God has just shown Moses the ingredients for the mishkan, which include green fire, black fire, and white fire. Moses balks at God’s instructions to do “exactly as I show you,” and asks, “How am I going to find or make green, white, and black fire?!” He is despondent as he ponders how he can do exactly as God has asked when God is asking for something that is beyond the reaches of human capability. God answers Moses by saying, “I have shown you according to my heavenly materials, you build it according to what you have.”

There are times where we may be asked to take on tasks that feel impossible, or out of our reach, and this midrash and parsha are here to remind us that even in those hardest and most stressful of times, God is only asking us to do the best we can with what we have; to give of our hearts, but not to go overboard. But nowadays, when we are no longer in the time of the mishkan, and most people don’t spend the majority of their time in airports, or other liminal spaces, what should we do when we feel pulled in a thousand different directions? How do we build our own sanctuary that we can fill with our whole selves?

I would like to invite us to draw on the beautiful words of God via the midrash here as well. God asks us to build according to our materials and ingredients and abilities, not God’s; God asks us to give from whatever we are moved to bring, not just what God orders. So, let’s spend an extra minute or more in our car on a sunny day, taking time just for ourselves before we walk in the house. Let’s spend 10 minutes before bed reading a book “just because.” Let’s take one more walk outside admiring the nature around us before we head back inside to bury ourselves in work again.

This all feels incredibly more poignant as I am currently in the most terrifying liminal space I have ever experienced. I am at the end of five years of rabbinical school, looking for a job, but completely unsure where I will end up. I am in the airport terminal of my own life, quite literally in between departing and arriving. So, what else is there to do except treat myself to a luxurious airport latte and try and let the rest of the world melt away? This, too, is a small gift of the heart, a way to build a personal sanctuary in time.

Yael Werber is a fifth-year rabbinical student at Hebrew College. She is interning this year at Congregation Beit Simchat Torah (CBST) in Manhattan.