CJP’s Israel Advocacy spent a week in January in Israel with a group from Harvard University, visiting some of the success stories that make up the Start-Up Nation. Nancy Katz, director of CJP’s Israel Advocacy and herself an alum of Harvard and a former professor at Harvard Kennedy School, is blogging about the group’s experiences and impressions.

Israel’s Supreme Court (ISC) is unique in the world; not only for its extraordinary case load, but for rules allowing non-citizens to bring cases before it. Since Israel does not have a national constitution, the Court plays a critical role in Israel’s democratic functioning.

Visiting with Justice Salim Joubran, the first Arab to gain a permanent appointment to the ISC, was a special opportunity.  Joubran is wise, articulate and very gracious. He’s also an exceptionally busy man. Along with the 14 other justices, he works 12-hour days sorting through a case load that can approach 10,000 a year. Compare that to the U.S. Supreme Court’s 80-100 cases a year and it’s understandable why Joubran comes in early and stays late.

One reason for that case load is the absence of any layer of judiciary between the district courts and ISC. The other is that anyone – even Palestinians who live within the Palestinian Authority – can petition the ISC. To manage the work, three-judge panels handle each case.

“We think it’s important for everyone in the country to have standing, whether they are a citizen or not,” Joubran said. “It’s critical that everyone feel that someone is listening to them and hears their concerns. That is an important part of our purpose.” 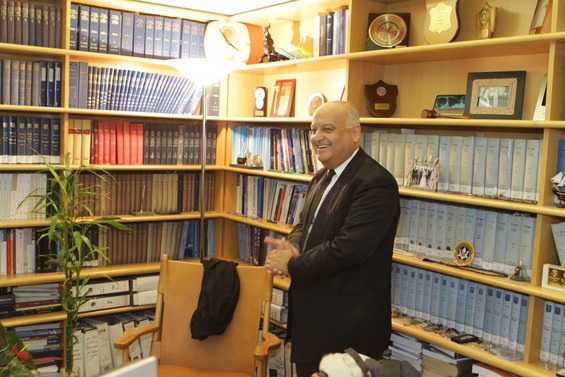 Actually, not every petitioner will have their case heard. A single judge can dismiss a case on its face, if appropriate.

Every religious group – and subgroup – has its own courts, lower and appeals, handling primarily marriage and divorce issues. There are, for example, 15 different religious courts for the 15 distinct Christian communities in Israel. Muslim residents and citizens can apply Sharia law within their communities.

Justice Joubran lives in Haifa and, like his city, is a model of tolerance.  He says growing up in a city known for cooperative co-existence makes this second nature to him.  This serves him well in his work.  “I sometimes quote from the Torah in my opinions,” he said. “I can also translate issues into Sharia law for Muslim petitioners.”