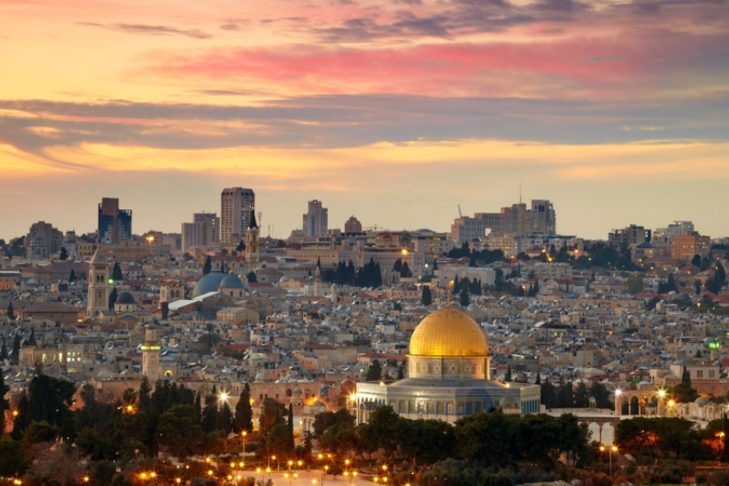 My grandfather, back in Belarus, was a very religious man. When I was a child, he would often tell me about Jerusalem. Even though I was only 5 or 6 years old then, I vividly remember the emotion in his words. He longed to feel Jerusalem, to unite with it. Simply speaking about it made his eyes shine.

My grandfather was born in exile and died in exile. But when I came to Israel and went up to Jerusalem, I remembered his stories, and as soon as we started the climb into the mountains of Jerusalem, I felt his spirit with me; I was realizing my grandfather’s dream. It moved me deeply.

Regrettably, Jerusalem today is very far from the Jerusalem in my grandfather’s dreams. The Hebrew word for Jerusalem, Yerushalaim, is a combination of two words: Ir [city], Shlema [whole/complete], meaning “a city of wholeness” or “a city of completeness.” Also, the word Shalom [peace] comes from the world Shlemut [wholeness] or Hashlama [complementation]. This is why Jerusalem is also regarded as Ir Shalom [a city of peace].

Evidently, there is no wholeness in Jerusalem, no complementation, and certainly no peace. There is plenty of the opposite: division, conflict, and hate. King David, who wrote in Psalm 122 that Jerusalem was built as a city that was joined together, would not be happy if he saw that Jerusalem has become a symbol of conflict, a hub of religious fanaticism and bloodshed.

Despite the intolerance, the city will become what it was meant to be—a center of peace and wholeness, a center of healing for a tormented world. The Book of Zohar writes about Jerusalem (Pinhas, 152): “Jerusalem among the rest of the countries [is] like the heart among the organs. Hence, it is in the middle of the whole world, like the heart, which is in the middle of the organs.”

Jerusalem, being the central place for Judaism and Christianity, and an important center for Islam, reflects the relationships among the faiths. Since there is no peace among them, the center, where the three religions meet, becomes the focal point of the frictions among them, and therefore the center of hostilities. Over the centuries, the city has been governed by all three vying religions, but the governance has always been achieved by war. Jerusalem will become a city of wholeness and peace, but the question is how long it will take us to make of it what it is meant to be, and how much we will suffer in the process.

The reason that Israel now governs Jerusalem is that the people of Israel have the onus of being “a light unto nations,” of bringing unity and peace to the world. The fundamental rule of the Torah is “love your neighbor as yourself.” Israel must practice it and set an example to the rest of the world. Only when Israel does this will the rest of the world follow.

For a short while in antiquity, Israel did just that. During the third century BC, there was relative calm in the nation. Three times a year Jews would march up to Jerusalem to celebrate the festivals of pilgrimage: Sukkot, Passover, and Shavuot (Feast of Weeks). The pilgrimages were intended primarily for uniting the hearts of the people. In his book “The Antiquities of the Jews,” Flavius Josephus writes that the pilgrims would make “acquaintance … maintained by conversing together and by seeing and talking with one another, and so renewing the recollections of this union.”

Once they entered Jerusalem, the pilgrims were greeted with open arms. The townsfolk let them into their homes and treated them as family. The Mishnah (Bikurim 3) lauds this rare camaraderie: “All the craftsmen in Jerusalem would stand before them and ask about their well-being: ‘Our brothers, men of so and so place, have you come in peace?’ and the flute would play before them until they arrived at Temple Mount.” The book Avot de Rabbi Natan writes that every material need of every person who came to Jerusalem was met in full. “One did not say to one’s friend, ‘I could not find an oven on which to roast offerings in Jerusalem’ … or ‘I could not find a bed to sleep in, in Jerusalem.’”

While they lasted, those festivals of bonding had made Israel “a light unto nations.” The book Sifrey Devarim (Item 354) details how people from other nations would “go up to Jerusalem and see Israel … and say, ‘It is becoming to cling only to this nation.’”

Moreover, when Ptolemy II Philadelphus, King of Egypt, heard of the unity of the Jews, he wanted to learn their wisdom. Ptolemy invited 70 sages from Jerusalem to his palace in Alexandria to translate their books into Greek. But before he sent them off to create what is now known as the Septuagint, the first translation of the Old Testament into Greek, Ptolemy asked them about their wisdom, and mainly how he could benefit from it as a ruler. In The Antiquities of the Jews (Book XII), Josephus writes that Ptolemy had sat with the Hebrew sages for 12 straight days asking them “rather political questions, tending to the good … government of mankind.” Ptolemy was “delighted with hearing the laws read to him, and was astonished at the deep meaning and wisdom of the legislator,” writes Josephus.

Finally, “When they had explained all the problems that had been proposed by the king about every point, he was well-pleased with their answers,” concludes Josephus. Moreover, the historian writes that Ptolemy testified that “he had gained very great advantages by their coming, for he had received this profit from them, that he had learned how he ought to rule his subjects.”

Regrettably, Israel’s unity did not last. Internal division and conflicts destroyed the land, and the people were exiled because of their hatred for each other. Now that we are back in Israel, the burden of proof is once again on our shoulders to show that we are worthy of being “a light unto nations,” the center of unity whose heart is Jerusalem.