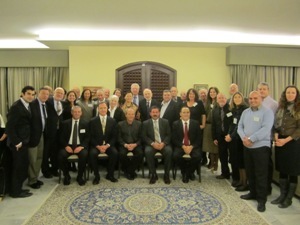 This was no regular mission to Israel; in fact, it didn’t even start in Israel. Instead, getting right down to the task at hand, the recent nine-day Jewish National Fund (JNF) Parsons Water Fund Mission began in Jordan, its 21 participants determined to immerse themselves first-hand in seeking solutions to the water crisis that plagues Israel and her neighbors.

In meetings with Palestinians, Jordanians and Israelis – ambassadors and experts alike – the group, consisting of dedicated and passionate people devoted to JNF and its work to better the quality of life in the region, reviewed several key projects in the area. Those included the Red-Dead Conveyance Project, the Zei water treatment facility run by the Jordan Water Company which serves and monitors the water quality in the King Abdullah Canal, the Adasiya diversion dam, the King Abdullah Water Control Station, the Jordan River, the Arara water treatment facility, desalination plants and more.

The fact-finding trip was coordinated in partnership with the Arava Institute for Environmental Studies. High level meetings were conducted with emphasis placed on collaboration between countries.

Laureine Greenbaum, a mission participant and JNF Parsons Water Fund board member said: “We learned that Jordan is one of the 10 most water-deprived countries in the world with one of the lowest levels of water sources per capita; water has been rationed there for years. We also learned that Israel has been a good friend to Jordan assisting with its water needs. Israel has not only been meeting its water allocations as provided for in the peace agreement, but also has been lending Jordan additional water during the drought over the past few years.  It is my understanding that when it comes to water, Jordan is fighting for its life.”

Israel, as well as the rest of the region, is experiencing its worst water shortage on record. Consecutive years of drought, coupled with an increased demand from a rapidly growing population, have led to the overexploitation of the country’s few natural water resources. Because Israel annually pumps more water than is replenished by rainfall, its surface water bodies and aquifers have dwindled to critical levels, threatening irreversible contamination of the water supply and long-term ecological damage.

According to the National Investigative Committee on Water, Israel’s total water deficit is approximately 530 billion gallons. The need to develop alternative water sources to augment the country’s supply has never been more urgent. The Israel Water Authority is implementing a plan to meet most of the country’s household water needs through desalination. To help bridge the gap until this system is fully operational JNF established the JNF Parsons Water Fund, a $100 million initiative to increase Israel’s supply of high-quality water by more than 440 billion gallons over the next decade.

The Fund invests in a diverse portfolio of projects in Israel to create new sources of water, promote purification and recycling, improve water quality in streams and rivers, and encourage conservation through education and advocacy. These initiatives will impact Israel’s future and national security—freeing up drinking water for more than one million people, providing for the irrigation of over six million acres of crops, preserving and cultivating open spaces, and allowing for the sustainable development of new communities in Israel’s periphery.

“Additionally,” said Col. (res) Sharon Davidovich, Director of the JNF Parsons Water Fund, “water knows no borders, and the availability of this essential resource is critical to regional stability. This is particularly true in the Middle East, where water security will be an integral part of a durable peace settlement. The JNF Parsons Water Fund seeks to share conservation, collection, and recycling technologies with Israel’s neighbors and countries throughout the world grappling with water management issues.”

Solutions to the water crisis, both long- and short-term were discussed. “In Jordan,” said Leonard Miller, mission co-chair, “the focus was on the Red-Dead Conveyance Project, and it looks like a pilot project will be financed by the World Bank. They are desperate for water there. His Excellency Dr. Hazim El Naser, former Minister of Water & Agriculture, said, ‘when you’re the minister of water here in Jordan, you become very depressed.’”

In Israel, participants were thrilled to see that one of the projects—the Shamir Drill in northern Israel – has already started pumping water to help raise the level of the Sea of Galilee. Visits to other projects that are underway and already making a difference in Israel’s water supply, including rainwater harvesting in the schools, constructed wetlands, the progress on the Be’er Sheva River Park and more, brought great satisfaction to the participants.

“It was a wonderful trip but more than that it was a critical trip,” said Sharon Freedman, JNF National Campaign Director, “both in scope and in what it means for the future. The mission co-chairs — Leonard Miller and Marvin Rosenberg — did  an outstanding job together with Col. (Res) Sharon Davidovich and Dr. Clive Lipchin of the Arava institute,. “We came away from the mission confident that JNF is poised to really move the collaborative efforts forward. We invite NGOs in Jordan and the Palestinian Authority to get on board with us.”

Said Amy Parsons, Vice Chair of the JNF Parsons Water Fund, “after visiting Jordanian water facilities and hearing from top water experts there, I am even prouder of the way the Israeli government handles the same problems for her citizens. For some strange reason the Jordanians we met find it acceptable to have basic water supplied once a week in lucky. The water issues are critical and need to addressed better.

Jewish National Fund (JNF) began in 1901 collecting coins in blue boxes to purchase land and return the Jewish people to their homeland. In over 108 years, JNF has evolved into a global environmental leader and become the central address for partnering with the land and people of Israel. JNF has planted 240 million trees; built over 1,000 parks and recreational areas; constructed security roads; educated students around the world about Israel; created new communities so that Jews from around the world would have a place to call home; discovered new means of growing plants under arid conditions, bringing green to the desert; and built over 205 reservoirs and water recycling centers, increasing Israel’s water supply by 12%. Today, JNF is supporting Israel’s newest generation of pioneers by bringing life to the Negev Desert, Israel’s last frontier.