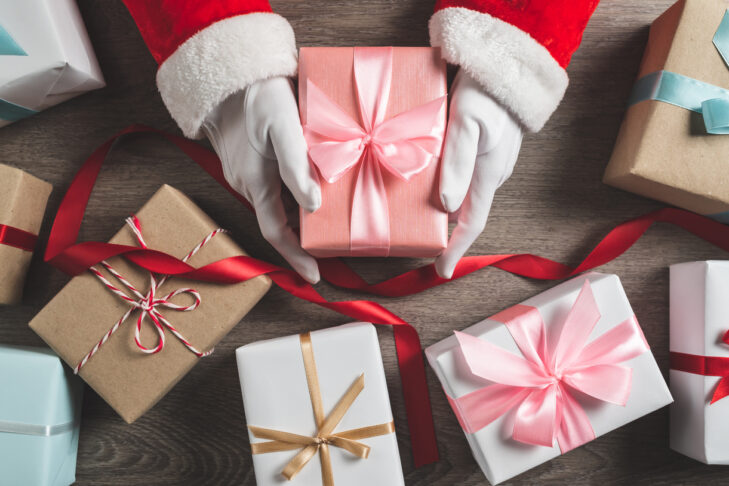 This question drew a big response when I posed it on various message boards. For Jewish kids, well, maybe it’s no secret: Santa isn’t real. But for kids who celebrate Christmas, Santa might as well be Justin Timberlake: mythical, revered, a little bit quirky, surrounded by an entourage…but certainly benevolent.

If your kids don’t believe but have friends who do, how do you honor their traditions and keep the secret alive? Children have big mouths. I remember being told to never, ever spill the beans to friends; it was a quick and easy way to snap an elementary-schooler’s innocence in half. Now I’m facing the same dilemma with my 9-year-old, who (sort of) still believes in Santa, in that he thinks there are 50 Santas, one for every state. His 3-year-old brother, meanwhile, firmly believes that Santa resides in the North Pole. It’s a delicate dance.

Three Jewish moms told us how they approach the Santa secret with their own children, in the spirit of respect and celebration.

Becca’s story: “He thought it was this amazing secret that he knew.”

“I have one son; he’s 10. We’re a Conservative Jewish family. We don’t do anything with Christmas, except my husband’s sister is married to someone who’s not Jewish. So, we actually celebrate Christmas at my brother-in-law’s mother’s house every year. We’ve done this every year since my son was born. Even though we are Jewish, we celebrate Christmas at Mimi’s house. It’s Mimi’s holiday; that’s their grandma’s name. My son is like another grandchild to her, which is really nice. She decorates for Christmas like crazy. My son, growing up, knew that Santa never came to our house because we’re Jewish.

“Santa just doesn’t visit us. Around 5 or 6, we had the talk that Santa doesn’t exist, and it’s moms and dads who give gifts. So, he knew going to Mimi’s that Santa is not coming to Mimi’s house. It’s his cousins who visit and all the gifts come from parents. He thought it was this amazing secret that he knew, that nobody else got to know about.

“Now, of course, he was in Hebrew school. When he went to Hebrew school, it was one of these things all the kids knew, because, of course, it’s all Jews! But at regular school, and what we talked about was, even though you know the truth, it is not your responsibility to share this with anybody else.

“I happen to have a highly anxious kid who is really good at understanding that this is private; we don’t talk about this. And so he doesn’t feel the need to blab. Of course, he loves to come home and say, ‘Hey, we’re talking about The Elf on the Shelf and I know it’s not real.’ He was so proud that he knew the truth and nobody else did.

“For him, it was just something very, very serious. We said, ‘We know you know the truth, but we do not tell anybody else, because that’s for their mom and dad to tell them.’ It was those really clear face-to-face conversations: ‘Look me in the eyes: I’m telling you, you do not spill the beans on this!’

“What’s really funny is when he was 9, or had just turned 10, he lost a tooth. And I think it finally hit him. ‘Wait a minute! If Santa’s not real, what’s up with the tooth fairy?'”

Abby’s story: “There are certain things that only parents really have the right to tell their kids.”

“I have 10-year-old boy-girl twins and a 6-year-old daughter. I’ve always told them that Santa Claus isn’t real to us because it’s not the tradition we believe in, but he’s very much real to the families who celebrate and believe in him. This was probably in kindergarten because they went to a Jewish nursery school at our temple, and it never really came up before that.

“My best friend is not Jewish but celebrates all the Jewish holidays with us, and she does celebrate Christmas also, so they have seen her do Christmas and Easter. So, it was one of those things where we just appreciate other people’s traditions and cultures; that’s how I explained it.

“They’re in public schools, and that’s when the questions started coming up because it was sort of the first time they really encountered other kids who were talking about Santa. I actually think it first came up around Passover because it was the first time they said, ‘We’re eating something different from everybody else,’ because at Jewish school it wasn’t an issue.

“We just focused on how it’s so beautiful to learn about other cultures and customs, and Passover is part of their custom. Santa is very real to their friends who believe in it, even though it is not real to us. That seemed to satisfy everybody.

“Now, it’s come up with friends who say, ‘Do you believe in Santa Claus? Do you know he’s real?’ And their response has been, ‘He’s not real to us because we’re Jewish, and those aren’t the traditions we celebrate, even if he’s real to you. Do you want to hear about our customs?’

“I think it’s also helped to have our friend who’s talked to them about what the actual meaning of Christmas is, and what Christians celebrate and the religious points of it, versus Santa and the presents.

“We’re respectful of other cultures, and it’s wonderful to learn about their traditions and their customs, and we would never want to take something away from that. The other way I explain it is that there are certain things that only parents have the right to tell their kids. It’s the same thing with your body changing and going through puberty. Those are parent talks. It’s not your place to tell somebody else where a baby comes from or to explain it, because every parent gets the right to tell their children what their family feels is appropriate at the time. If a friend asks you and is insisting on it, you could say, ‘That’s really a discussion you should probably have with your mom and dad.’

“I think we’ve always just been like, ‘If somebody keeps talking about Santa, invite them over for latkes and show our traditions.’ We have a lot of friends who aren’t Jewish but love to come to our seder.”

Debbie’s story: “We know that puppets aren’t really alive, but while we’re enjoying the puppet show, we believe they are.”

“I first spoke to my kids about it when they were little, and now it’s 10 years later! We adopted our kids from Russia. They’re a sibling pair. We adopted when they were 3 years and 9 months and 2 years and 9 months. They came here having experienced some kind of Christmas in the orphanage, and they’d never been exposed to anything else. But we’re a Jewish family, and we’ve never celebrated Christmas.

“We live in Sudbury, which is maybe less than a quarter Jewish. So, there’s sort of lip service given to Jewish holidays, but it’s primarily ignored. Our kids went to a Jewish preschool and, when they were there, and it was just normal to not really talk that much about Christmas. They had friends who were in mixed families.

“Then, as they began meeting more and more kids, they would go to a play date and see a Christmas tree and ask what it was.

“I remember kindly adults would ask them, ‘So, is Santa going to bring you lots of toys?’ And they had to say, ‘Well, who’s Santa?’ Because in Russia, there’s Father New Year, but not Santa Claus, like we have here.

“Within the first 18 months, the kids asked me, ‘Is Santa Claus real?’ I had to really think about that, because one of the important tenets that we had been teaching our kids about being members of the family was that we don’t lie to one another. Parents don’t lie to kids; kids don’t lie to parents. So, I knew right off that if I had said, ‘Well, no, Santa isn’t real,’ then they were going to have the question of, ‘Well, then, why are the parents lying to the kids?’

“Again, our communication was a little bit limited because my Russian was very weak, and their English was stronger than my Russian, but we had to kind of work it out. I probably made some kind of analogy explaining how a puppet show isn’t real. We know that the puppets aren’t really alive, but while we’re enjoying the puppet show, we believe they are. And so, in that context, such as when your teacher is doing a puppet show, then it’s OK for the teacher to do something that isn’t real for the kids.

“I said that Santa Claus was kind of like that, and that parents were putting forth this myth—though I didn’t use that word—for their kids so the kids could have a fun holiday. And my kids seemed to get that. Then I said, ‘Now, the important thing that we have to remember is that since we don’t play the Santa Claus game, we don’t get to spoil it for other people.’ They must have been 5 years old or so.

“And my kids never, to my knowledge, let on that Santa wasn’t real. But they came home from school conflicted, because they would keep this secret. Their best bud would talk about how Santa’s going to bring me this, this and this. And they would say, ‘But Mommy, it’s not real. And I wanted to tell them that, but I know I’m not allowed to spoil the game.’ And so I would have to say, ‘I know it’s hard to keep a secret, but you did the right thing. It’s not our job to tell them the truth. It’s their parents’ job.’