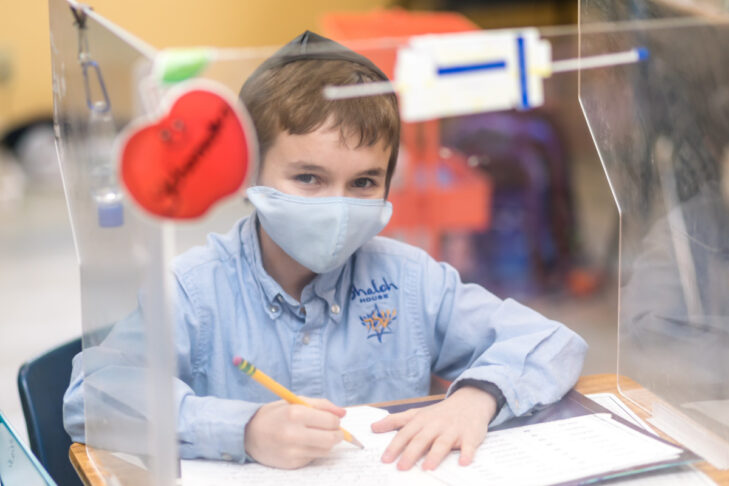 We’ve written lots about Jewish day schools over the past month. But what is Jewish education, really? If you enroll your child in one, what are you signing up for? I talked to Paul Bernstein, CEO of Prizmah: Center for Jewish Day Schools, to discuss the schools’ central pillars.

What are the components of a Jewish education versus those of another private school?

I want to look at it through the COVID lens. Because I think what COVID has done in education, generally, is to highlight or remind people that education is a lot more than grades. Sometimes, you can argue there’s too much of a focus on, “What college is my kid going to get into?” as opposed to a wider perspective.

Right from the start, the schools that did well were the schools that were doing excellently academically and figured out how to adjust to online or hybrid learning or how to come back in-person with social distancing. That was the first part. But the ones that really did well were the ones that, firstly, think about the whole child, their health and wellness, their development as a person and their general growth, and those that also had the strongest community. I think this is purely in education in general: A lot of the schools, whether they’re public or private, that have struggled the most are the ones where there isn’t a sense of community. There aren’t relationships between families and the school or the school district.

COVID surfaced all of these things, I think in a very positive way, because it meant that people recognized what we all know to be true, which is that educating your child is about developing the whole child, as well as the pure academic side of it. The last piece, of course, is we’re in a world where we’re all struggling with: How do we project and convey values from one generation to the next given the turmoil in the world? When you put all those things together—excellent academics, a real focus on the whole child, a strong community and conveying values—that’s what a Jewish day school is.

One of the reasons I think Jewish day schools, especially in Boston, have done so well is that those things were already their strengths long before we had a pandemic. What is the essence of a Jewish day school? It’s putting all those ingredients together in a beautiful way and raising the whole child to be their best self, whether their best self is going to go to Harvard University or [thriving] in other ways.

Not all Jewish day schools are the same. It’s a big umbrella. How might parents evaluate schools, and how might they differ?

There are always going to be a number of things that are important for a child to be successful in achieving their maximum growth to be their best selves. Find an environment that suits your child. Meaning, number one, yes, there are religious differences between schools. Find a place that suits the outlook that the family and the child want.

Number two, one of the things that Jewish day schools have really worked hard on is how to provide differentiated instruction to different types of learners. Every learner has their own different needs. Traditionally, we bifurcated between special needs and non-special needs. Of course, that isn’t true. You’ve got one of the best organizations in Gateways to really bring that to the surface and work incredibly closely with the Boston schools to improve the way they address each learner.

One of the things I think people don’t necessarily see from the outside of Jewish day schools is that, obviously, they are Jewish schools—but there is quite a lot of diversity within them. For example, economic diversity is common in Jewish day schools. So, people who are looking for diverse environments may assume a Jewish day school is more homogenous than most schools, but actually may find them much different than they would expect.

Some families might say: “Well, I’m not that religious,” and might be put off. How religious do you have to be to enroll?

We live in a community with incredible diversity of how people practice and what people believe around the core of what Judaism is. Schools are attempting to address different needs, and I think you see that in the diversity of what’s there in Boston, from Solomon Schechter Day School of Greater Boston to JCDS, Boston’s Jewish Community Day School, and Gann Academy to The Rashi School.

What’s the role of a Jewish day school in the 21st century and going forward in the next five to 10 years?

As we see the Jewish community evolve, which of course it’s doing all the time, there are more and more questions about: What does the Jewish community of the future look like? It’s essential that we have a place for children and youth that immerses them in Jewish life, that provides them with a safe and challenging space that allows them to ask all the difficult questions about what it will mean to be Jewish in the 21st century. And they are gaining in a Jewish day school both the core knowledge about what it means to be Jewish in a whole number of different ways, as well as the ability to “learn Jewish,” if you like, which I think will allow them to plot their own path in the Jewish future.

Are there certain tenets that inform a Jewish education, no matter what the style of school might be?

The two most fundamental things is that Jewish text drives learning. People use the texts in different ways. If you walk around Rashi, for example, they have quotes on their walls that come from Jewish texts. Text and values are the fundamental underpinning—obviously projecting a set of Jewish values, which are expressed in a variety of different ways. There aren’t core pillars that fix a curriculum. That’s one of the other things I think is a strength of our schools. There’s huge diversity of how they approach teaching and learning, but all grounded in the core principles, core values, core texts.

Are there any people for whom a Jewish day school might not be the right fit?

I think it’s true that a school can’t be all things to all people. What I’ve seen is Jewish day schools invest in the excellence of what they are delivering, often doing that on a platform of differentiated instruction in order to meet the different needs of wider groups of students. And I’ve also seen schools be very honest if they think they can’t achieve that outcome that I said at the beginning, which is to enable a young person to be their very best self when they graduate from school.

I don’t think there’s a set of rules or guidance that say, “Here’s the boundary,” because every school has their own approach. They work so hard on: “How do we cater for a broader group of students?” Because at the end, the principle is we want every Jewish child to have the opportunity for a deep Jewish education in a Jewish day school. And therefore the goal is that through the range of schools that are available, we can ultimately serve everyone. And you’ve got to strive for a goal like that. You have to work really hard to serve as many as want it, and that I know they will continue to work incredibly hard on.