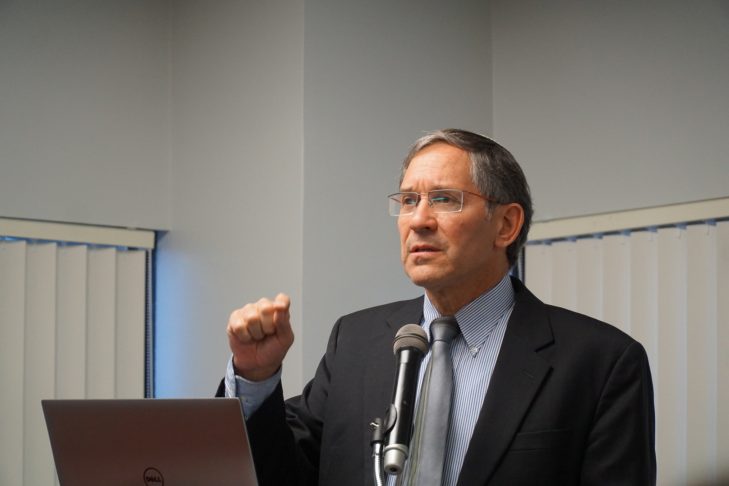 “Palestinian Media Watch (PMW) was established in 1996, after the Oslo Accords, with the goal of informing people about what Palestinians say and do amongst themselves,” explained Itamar Marcus, founder and director of PMW.  He spoke at the Israeli American Council in Newton in late June.  “What are they teaching their kids? We study all we can about their culture, schoolbooks, even crossword puzzles.” The work of PMW shows the extent to which Palestinians are raised on ignorance.

Marcus has been honored by The Zionist Organization of America, The Endowment for Middle East Truth and Israeli Media Watch. He was named one of the Top 100 People Positively Influencing Jewish Life by the publication Algemeiner. During Marcus’s talk, “The World of the Palestinian Child: How Hamas Stole Abbas’ War of Political Survival,” he explained, “There are two worlds, English and Arabic. We understand a society by who are their heroes. Palestinian heroes are terrorists. Terrorists are put on a pedestal. Jews and Israelis are demonized. Palestinian children are indoctrinated and brainwashed.”

Marcus explained that hundreds of sports festivals are named for those who have murdered Israelis. An example is Dalal Mughrabi, who participated in the worst bus hijacking in history in 1978 on Israel’s Coastal Highway. Thirty-eight people were killed, including 12 children. Explained Marcus, “She has more events named for her than anyone but Yasser Arafat.” Schoolbooks also honor terrorists. In a fifth grade textbook, explained Marcus, “children are taught, ‘These are the heroes you want to emulate.’ Bethlehem High School for Girls, for example, honors as a role model 17-year-old Ayat Al Akhras, who killed herself and two Israelis in a supermarket bombing in 2002.”

In a Fatah children’s magazine, 5- to 10-year-olds are told that in 2014 a “heroic fighter for Palestine” rammed a car into and stabbed to death 25-year-old Dalia Lemkus, who had survived a stabbing attempt in 2006. “The Palestinian Eichmann has been borne,” heralded another publication, when a grandfather of three generations of Fatah members named his grandson after Eichmann, whose namesake was a senior Nazi leader and a major architect of the Holocaust. Fatah is a political party whose charter affirms “the world-wide struggle against Zionism.” An article in a Palestinian newspaper declared, “Israelis use on us what the Nazis used on them.  What the Palestinians are going through is the Second Holocaust.” Publications equate Jews with Nazis, dehumanize them, and call them apes and pigs, quoting the Koran. Marcus showed a video in which Palestinian children refer to Jews as apes and pigs, a theme which is perpetuated in mosques and in shows intended for children. A recent PA documentary declared, “The Holocaust was the Jews’ payback for their wickedness.” Mahmoud Habbash, the Palestinian Authority’s supreme sharia judge, has declared, “What we’re seeing is a conflict between good and evil, Allah vs. Satan.”

“’Strap on an explosive belt, detonate, terrorize them. How sweet is the taste of martyrdom,’ declare music videos for kids,” said Marcus. “We Jews think these things are just words, but Palestinians believe that 72 virgins will greet them in paradise after they kill Jews. And thus the Palestinian worldview is built.” He noted that Fatah has a Facebook page. “Recently there was a poem for girls in which a Palestinian mother tells her daughter she is destined for martyrdom. ‘Give the child a rifle,’ the poem instructs. ‘We were not created for happiness. Our weapon is Islam and our children are our ammunition.’”

“How does this end?” Marcus asked rhetorically. “According to a PA senior religious education official, it will end with the death of Jews and of America. The message is that the existence of Jews prevents the good life for the rest of the world. They don’t just want the so-called territories and Jerusalem, they want all of Israel; for them, all of Israel is Palestine, which has been occupied since 1948, not 1967.”

“Many do not understand what happened in the recent Hamas bombing of Israel,” added Marcus. “It was not spontaneous. It was not because of violence at the Al Aqsa Mosque. It was not a dispute about a house in Sheikh Jarrah in East Jerusalem; there have been dozens of similar cases over the years.” Abbas, president of the Palestinian National Authority and chairman of the Palestine Liberation Organization, had been pressured to hold the first election in 16 years. His term in office was supposed to have lasted four years. Polls showed that he had no chance to win, whereas Hamas did, so Abbas canceled the election and fostered violence against Israelis, which provided a distraction. Hamas, unhappy with Abbas, fired 4,300 rockets into Israel (although many fell short and killed Palestinians), thus asserting their superiority. Both sides claimed victory.

“None of this had anything to do with Israel. It was about the election and about religion, the importance of death as a martyr,” said Marcus. “77% of Palestinians think that Hamas won the conflict, so in the PR war they made out well. The goal is to demonize Israel and make Palestinians feel threatened. It was also a reminder that whoever kills Jews is a hero.”

“We are trying to get this information out. I speak to Congress, Republicans and Democrats. I have talked to the Facebook person who deals with hate speech,” said Marcus. “We published a 50-page report on the promotion of terror. Why are anti-Israel/antisemitic Facebook pages allowed to continue? They wouldn’t do this with white supremacists. We need a hearing on Facebook as a terror promoter. If someday Hamas wins, it will be deadly for Israel. This we can never allow.”