On July 2nd, 2011 Camp Ramah in New England nine and ten year olds learned about Gilad Shalit, an Israeli soldier who was captured in 2006. Ramah staff began their program, which was conceived by one of their Israeli staff, by performing a play based on the story that Shalit wrote at the age of 10. The story, “When the Shark and the Fish First Met,” is about two unlikely friends who end up living in peace. The story symbolizes the relationship between Israelis and Palestinians.  After hearing this story, campers spoke openly and thoughtfully about their feelings toward the subject. They concluded by singing “Achenu,” a song about global Jewish unity and brotherhood.

Two days later, the edah (division) gathered to express their support and empathy for the Shalit family. They made posters to hang inside of their bunks to raise awareness within the camp. In addition, each bunk wrote a letter addressed to Noam and Aviva Shalit, parents of Gilad. Lastly, to culminate this program, the campers and staff worked together to decorate a large banner to be sent to a tent that was set up to support the Shalit family. This location, close to the home of the Israeli Prime Minister, Benjamin Netanyahu, attracts thousands of visitors everyday. Prior to arriving at CRNE, one of the Israeli counselors made a connection with one of the spokesmen from the tent. It is anticipated that the banner will be hung at the tent in Jerusalem.

Below is a sample of one of the letters written to the Shalit Family:

We are 9 years old. We want you to know that you have a whole nation praying for you. We believe that Gilad is still alive and that he will come home soon. We are on your side. Don’t give up! We hope that Gilad comes back healthy and strong. May G-d give you strength and get him back. Camp Ramah will always be there for you and we will never lose hope. We can’t wait to celebrate the day he returns home. We are thinking of you!

Camp Ramah in New England continues to learn about Gilad Shalit and prays for a safe return. 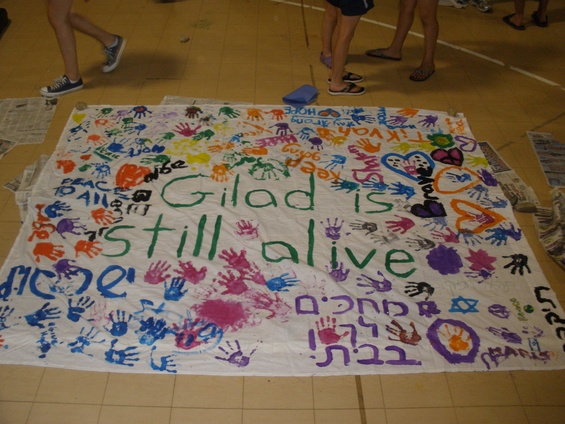